Fall has arrived at last, and with it, our now-annual space blockbuster, destined to spark as many thinkpieces and “What This Movie Gets Wrong About Science Stuff” explainers as 2013's installment (Gravity) and last year's (Interstellar). The Martian, directed by Ridley Scott and based on the first self-published and now bestselling novel by Andy Weir, is probably the most enjoyable of the three, if not the most fantastical. This is the most practical and down-to-earth (haha) of the trio, without all the relentless visual metaphors of Gravity or the mind- and time-bending theoretical physics of Interstellar.

Matt Damon stars as Mark Watney, a member of a six-person mission to Mars helmed by Commander Lewis (Jessica Chastain) who gets left behind on Mars when the crew has to abandon the planet suddenly. Watney, the crew's botanist, has to figure out how to communicate with earth and survive on a barren planet, while NASA and a herd of scientists scramble back on Earth to figure out how they might bring him home.

Weir's novel is not great literature, though it's certainly a fun read (the fact that I read it during a recent hospital stay, while hooked up to beeping machines and an oxygen tube may have helped enhance its appeal—I'm fine now, thanks for asking). The film is that rare case in which the problems with the original when read by a general audience—its sometimes overlong science-y explanations, its occasionally clunky narratorial shifts—are almost all ironed out of the on-screen adaptation, without losing the flavor of the original.

This is still a very nerdy movie, with lots of botany and physics and “we ran the numbers and it checks out,” ... 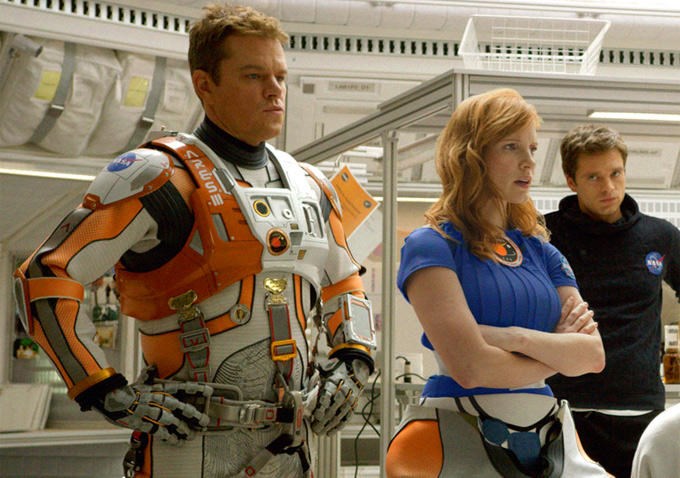