A remarkably morally dense and thrilling look at people, politics, and the power that controls the two.
Jackson Cuidon|September 19, 2015
Image: Richard Foreman, Jr. / Lionsgate
Emily Blunt and Victor Garber in 'Sicario'
Our Rating

“You’re asking me to explain a watch,” says Alejandro (Benicio Del Toro), when Kate Macer (Emily Blunt) asks him about the state of the Mexican drug cartels. Like Alejandro, Sicario doesn’t seem especially interested in explaining the exact tanglature of the web, preferring instead to map out one woman’s ensnarement within it.

“Sicario” is a Mexican term for hitman, deriving from the Hebrew word for Roman-killing Zealots. But it’s clear the word connotes more than just “hitman”—and throughout the movie, exactly who are the Zealots and who are the Romans is never clear.

Initially, Macer would seem the obvious choice for the term. Her FBI task force discovers a house whose drywall is filled with scores of corpses, and as they investigate the house, a booby trap kills two of her fellow officers. In response, she joins a special response team lead by Josh Brolin’s mononymic Matt. That team is composed of a dozen Delta force members just home from Iraq, as well as the mysterious Alejandro, who is aligned with the US government the same way a fighting dog is aligned with its handler. Macer asks Matt if the team will go after the people who were behind the murder house. His answer: “If you want to get the people who are really responsible—then yes, we’ll do that.” (Cryptic emphasis his.)

But what is the team’s objective? Where are their boundaries? And most of all, why do they want her, specifically? Macher spends the movie trying to unravel these questions.

Sicario is a spectacular thriller, but it is first a good movie, and a thriller second. In this respect, it’s got less in common with its alleged sister-films ... 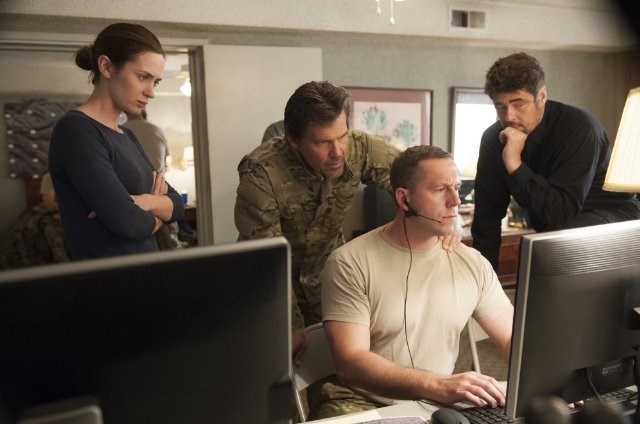