A new twist on the tale of the Christ.
Alissa Wilkinson|August 17, 2016
Image: Paramount Pictures
Jack Huston in 'Ben-Hur'

Why would anyone feel the need to make another Ben-Hur? 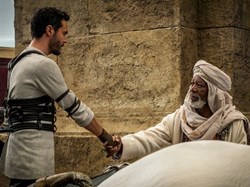 It's not strictly accurate to frame this film as a remake of William Wyler's 1959 classic, since that film was itself an adaptation of the 1925 silent film Ben-Hur: A Tale of the Christ, and that film was based on Lew Wallace's 1880 novel, sometimes called the “most influential Christian book of the nineteenth century.” There's also the miniseries from 2010. And the animated film from 2003. (I'm probably missing some others.) But Wyler's film is the best-known version, and this new version could never hope to escape its orbit.

Then again, since the dawn of cinema, people have been making new movies about the life of Christ—including Son of God, the 2014 box-office success executive produced by Mark Burnett and Roma Downey, who serve the same role in the latest Ben-Hur. Burnett and Downey's involvement in a project usually means it's destined for the faith-based marketing niche, and certainly this Ben-Hur is settled firmly in that slot.

But just because it's done all the time doesn't mean it's okay—especially when a very memorable version of the story is still broadly watched and praised by audiences. If you're going to make a new version, you should have a good reason. (Or at least a reason.)

So last weekend, I fired up all 224 minutes of the 1959 Ben-Hur and watched a very non-Jewish-looking Charlton Heston journey, as Judah Ben-Hur, toward forgiveness and faith. Despite every story beat feeling almost too familiar by now, after years of running on TV at the holidays, the film holds up: it's a a stirring, operatic tale, and it's deeply watchable today, once you calibrate your expectations regarding casting and acting.

I watched, trying to decide if it needed an update. To my surprise, it does. Not in the iconic chariot race, which is still thrilling, or the war ship's galleys, which are still harrowing. But while the older film picks up on its plot's political themes, they're not really the point of the story, and often take a back seat to Hollywood epic standards: romance, tragedy, triumph, and spectacle. 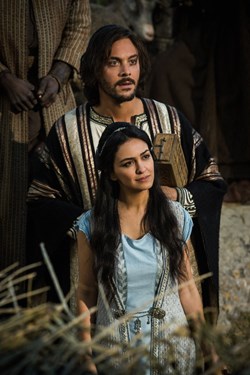 And yet if Ben-Hur is actually “a tale of the Christ,” then it's exactly its politics that ought to be inescapable.

That's because at core, Ben-Hur is not just one guy's redemption story. It's much bigger than that, an argument that mingles politics and religion in a way that seems utterly modern. The plot sets up conflict between several ways of understanding the world—the Roman way, the Jewish way, and the zealot way—and then drives Christ straight through the middle of it as the great disruptor, a challenge to every human way of understanding the world. Christians often talk about the way of Christ as the way of the upside-down kingdom, because Jesus was a master of contradictory statements about the true state of things: the first shall be last, the great shall be made low. Blessed are the meek and the merciful, the poor in heart and the persecuted. Want to be great? Get down on your knees and wash the feet of your friends and your betrayers.

Assuming, probably rightly, that getting the faith-based audience in the multiplex door wouldn’t be the biggest box-office challenge, the film's marketing has focused largely on its action sequences. That makes some sense. Director Timur Bekmambetov has turned out his fair share of insane flicks—Wanted and Abraham Lincoln: Vampire Hunter among them—and his signature eye-popping bombast was likely envisioned as the hook for some epic-loving audiences. The cast is uniformly good, led by Jack Huston—who unlike Heston actually looks Jewish enough to be a Judean prince, owing to some Jewish ancestry—as Judah Ben-Hur. The sole weak point may be Morgan Freeman, not because he's not good as a wealthy African merchant who befriends Judah and ultimately engineers his charioteer's entry into the arena, but because he's so much more familiar than the rest of the cast that it's a bit distracting.

But contra many people's assumptions that there would be less Jesus in this one, the new Ben-Hur actually has a higher Jesus-per-minute ratio than Wyler's film (partly because it’s almost a couple of hours shorter). It also streamlines its focus, setting up the political allegiances and Jesus' radical message from the start. 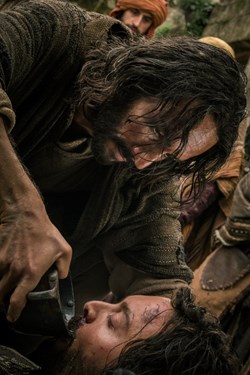 The movie works overtime to both differentiate itself from its predecessor and pay homage to it, mostly successfully. Both the ship scene and the chariot race are still heart-pounding, constructed to look quite similar to the 1959 film, though there's a bit more brutality. The plot changes largely help keep the story fresh and interesting, instead of a re-tread of the movie you could have just watched again. The romantic subplot between Judah and Esther, which in the older film feels a bit uncomfortably like it's ripped from a romance novel called The Servant Girl and the Betrayed Prince, is handled differently, as is the manner in which Judah's fortunes turn at several points. Most notably, Massala (Toby Kebbell) here is the adopted brother of Judah and Tirzah, whose father hoped that the move would be an “example of unity in this divided land.”

Yet this Ben-Hur's main focus is how the way of Jesus presents a path that threatens the powerful, challenges the violent, and models radical compassion. Christ's way challenges two extremes: the desire of the Romans and their colluders for peace at the cost of liberty, and the desire of the zealots for liberty no matter the bloodshed; eventually, it challenges the wealth-focused nihilism of the merchants as well. Peace, freedom, and industry are all good things, but, the film posits, their excess is deadly and inhuman. The upside-down kingdom Christ preaches is one where compassion trumps violence and oppression. And they kill him for it.

Does the film have deficiencies? Yes, especially the last few minutes, which indulge in a denouement that is nearly as bad as the “Martha” plot point in Batman v Superman: Dawn of Justice, followed by trite wrap-up narration and—very, very unfortunately—a terrible pop song. That kind of ending seems manufactured for the easy-resolution conventions of the religious movie genre. And though modern ways of thinking about religious affiliations don't map onto the ancient world, certain lines characters speak also feel a bit too conveniently modern, which might have worked if Bekmambetov didn't have such a flair for vividly (and sometimes luridly) constructing the cruel realities of the ancient world under Roman rule. 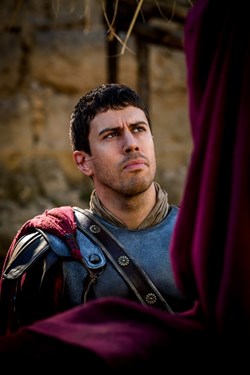 Perhaps most oddly, the priests and Pharisees, for whom Jesus reserved his most biting indictments, are nearly absent from the movie, which effectively declaws a man known partly for his scorching criticisms of hypocritical power-hungry religious leaders. Given that his preaching challenged them at least as much the Romans and zealots, this is a curious omission and a missed opportunity to show an additional way that man can twist a good thing into just another power-grubbing. That potent message seems especially important in the American political climate circa 2016.

But still. On balance, give me Bekmambetov's Ben-Hur—with its pulsating battles and chariot races, its proclamation that mercy and sacrifice are more revolutionary than anything you can cook up with swords or chariots—over any of this summer's exhausting superhero movies with muddled, half-baked ideas and an obligatory culminating showdown between guys who can punch really hard.

Ben-Hur wisely stays on the family-friendly side of PG-13, mostly for epic violence—but the camera keeps moving and doesn't dwell on the gorier bits. People get dragged by horses, bloodied by stone walls and collisions with ships and chariots, pierced with swords and spears, drowned, slammed to the ground, and so on. Most young teenagers will be fine.

Alissa Wilkinson is Christianity Today's critic at large and an associate professor at The King's College in New York City. She is co-author, with Robert Joustra, of How to Survive the Apocalypse: Zombies, Cylons, Faith, and Politics at the End of the World(Eerdmans). She tweets @alissamarie.