Jump directly to the Content
Explore
Work of Our Hands

Eventide Funds has confounded the investment world with its success—and its biblically based principles.
Jeff Haanen|November 23, 2016
Image: Josh Andrus

Not long ago, when reporters wrote about Robin John, the cofounder of Eventide Asset Management, a subtle snicker rumbled under the surface. One called him “The Believer”; others pointed out the odd language on his Boston-based mutual fund company’s website: business as an “engine of blessing” and “biblically responsible investing.”

Theology as the foundation for picking stocks? Is this guy for real?

Today the murmurs seem to have faded, and for good reason. Since its launch in 2008, Eventide’s flagship mutual fund (a pool of money professionally invested in stocks, bonds, and other securities), the Gilead Fund, has given shareholders a 13.70 percent annualized return as of September 30, 2016, compared to 9.03 percent for the Standard & Poor’s 500. To put that into perspective, an investor who put $10,000 into the fund at its launch would be worth $26,050 today. The Gilead Fund has been covered as a top performer by The New York Times, The Wall Street Journal, and Bloomberg, among other publications. Over the past three years, media attention has helped Eventide explode from $50 million in assets under management to nearly $2 billion.

But there’s more to Robin John than a focus on profit. Challenging Milton Friedman’s declaration that the only social responsibility of business is to increase profits, John says, “Profit is only the byproduct of a job well done.”

John, an evangelical living in Dallas, is a leader in the growing field of biblically responsible investing, which applies Christian theology and social concern to investment analysis. Eventide, founded in 2008, has garnered attention because of both its results and its uniquely faith-filled investment philosophy, driven ultimately by Jesus’ command to love your neighbor as yourself.

His journey to investing, however, was fraught with vocational doubt, uncertainty, and a heart-wrenching journey to India, the land of his birth.

Longing for a Calling

John grew up in a village in southern India, influenced by the faith of his grandparents. “I remember looking out my window as a child and seeing a cemetery,” John told me. “The church needed land to bury the dead, and so my grandfather, poor as he was, donated it.” John learned the Bible originally in his native tongue of Malayalam and saw a sacrificial faith lived out at an early age.

When John was seven, his family moved to Medford, Massachusetts, following his uncle, an international pastor at Tremont Temple Baptist Church in Boston. “We moved into a community where I was one of the only non-Italian and non-Irish students in class,” John says. Due to an error on his Social Security card, his last name became an abbreviated version of his middle name, Cheriakalath, while he was in school. It was nearly impossible for his Anglo peers to pronounce, just one factor that made growing up an Indian immigrant in American schools tough. So he studied hard and graduated in the top 1 percent of his high school class.

A few years later, John graduated with a degree in economics from Tufts University and took a job at a large bank. “I would pray for a calling to go into ministry,” John recalls. “But I didn’t hear from God. So, because I didn’t feel like I had a calling, I said, ‘I guess I’ll just make money and support those who do.’ ”

One of his first assignments took him from Boston back to Pune, India, near Bombay, to train new employees. 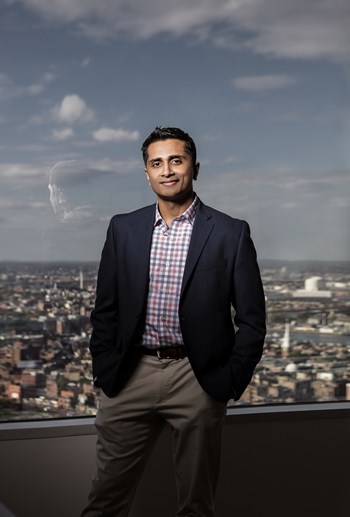 One day, staying in the guest house of an Indian firm, he asked the housekeepers where they slept. He discovered that in a four-bedroom house, they slept in a closet behind the kitchen on the concrete floor, with no mat or rags for a pillow. Outraged, he notified his company of the housekeepers’ living conditions. But the two men begged him not to pursue the matter or they would lose their jobs—and return to the slums.

When John returned to the United States, the air of his home office was heavy with tension. Outsourcing to India meant job cuts for American workers. Now coworkers in Boston came to John with their own plea: “If my job is going to India, you’ve got to let me know. I’ve got a family.”

“I started realizing that work is not just work,” John says. “People’s lives are being impacted.”

In the years that followed, he vocationally wandered from a bank to an accounting firm to part-time classes at Gordon-Conwell Theological Seminary, where he still longed for “a call to ministry.”

While in Boston, John got in touch with a friend from high school, Finny Kuruvilla. At the time, Kuruvilla was simultaneously pursuing an MD from Harvard Medical School, a PhD in chemistry and chemical biology from Harvard University, and a master’s degree in electrical engineering and computer science from MIT. (“And just for fun, Finny taught biblical Greek and Hebrew at his church.”)

John asked Kuruvilla to pray with him, hoping for a sense of God’s call. They prayed once a week for six months. “If God wants me to go into full-time ministry, that’s what I’ll do,” John said, uncertain about working in ministry or business. Together they started a house church and were joined by a Nigerian widow, Congolese immigrants, and a few Harvard students eager to serve their community.

Soon after, Tim Weinhold, an entrepreneur and Harvard alumnus, visited the house church. Getting acquainted after the service, Kuruvilla mentioned that he and some friends were thinking of starting a Christian mutual fund.

After prayer and discussion, John and Kuruvilla cofounded Eventide Asset Management with the vision of “Investing that makes the world rejoice.”

As the Great Recession began, the sun was setting on John’s longing for a call to ministry. In response to John’s question of whether to go into business or ministry, God slowly revealed his clear answer: “Both.”

From Plunder to Blessing

In the audience is a young couple, eagerly listening for advice on how to begin their meager retirement savings; a pastor turned investment adviser, fearing he’s failed now that he’s no longer a minister; and a bleary-eyed investment banker, tie-loosened and over-tired, wondering if he’s made a vocational mistake.

Conventional fund managers look for financial strengths in making investment decisions, John says. The problem is that profitability is a lagging indicator. It tells investors more about the past than the future. Moreover, it doesn’t show how a business made that money, whether through quality products or oppressive business practices.

Conversely, moral or ethical fund managers screen out the “vice stocks”—pornography, tobacco, weapons, or abortion—and then look for financial strengths. “This is the typical approach of what we might label biblically responsible investing 1.0. It’s a good start,” John says, “but it doesn’t go far enough, because business can harm not just through bad products but through bad practices.” For example, payday loan companies can trap the poor in a cycle of debt, and auto title loans can charge effective rates as high as 500 percent.

The biblical word for these business practices is plunder, says John, who cites biblical passages that emphasize God’s concern for the poor: “ ‘Because the poor are plundered and the needy groan, I will now arise,’ says the Lord. ‘I will protect them from those who malign them’ ” (Ps. 12:5).

God’s intent for business, investing, and all vocations is to serve and, in turn, bless humankind.

But instead of merely avoiding companies that plunder or extract value from a community, John says, “we look for companies with an extraordinary ability to innovate and create value for all stakeholders—customers, employees, suppliers, host communities, the natural environment, and society.” Each of these six stakeholders, Eventide believes, is a primary neighbor that businesses are called to serve. John dubs this positive vision “biblically responsible investing 2.0.”

The Eventide philosophy, or Eventide Business 360, is rooted in the biblical understanding that God’s intent for business, investing, and all vocations is to serve and, in turn, bless humankind. Weinhold, Eventide’s director of faith and business, points to verses like Deuteronomy 8:18—“But remember the Lord your God, for it is he who gives you the ability to produce wealth, and so confirms his covenant, which he swore to your ancestors, as it is today”—to show that business is uniquely able to create wealth and provide for material needs.

Business does this, according to Weinhold, by creating products that solve the material challenges of human existence and by making a profit, thereby enlarging human wealth to make those products affordable and accessible.

When deciding what businesses to invest in, Eventide considers factors often outside of typical investment analysis such as employee satisfaction, a genuine innovation in the field of investing. They use websites with company reviews shared by employees, as well as other sources, to evaluate both how well a business is “loving” its employees and also its long-term prospects for profitability.

In the days before the Great Recession, John says, “we saw the subprime mortgage industry was exploiting its customers. We didn’t invest there.” Avoiding dishonest practices, John says, is one discipline that can help the firm sidestep the kinds of activities that may be profitable—at least for a time—but do long-term harm.

Like the vast majority of mutual fund investors, most of Eventide’s 133,000 clients are average people saving for retirement. The minimum investment in the Gilead Fund is only $1,000 (or, with an automatic investment plan, $100). “We wanted anybody to be able to invest with us,” says John.

Eventide has performed well for their shareholders, but investing is risky business and can suffer downturns. Even in down markets, though, John reminds his team of their true purpose. Gilead, the name he and Kuruvilla gave their first fund, means “mountain of witness” or “hill of testimony.”

John remembers praying for a calling in 2008, descending into his unfinished basement to “ask God to use me for his glory.” In 2015, Eventide gave away more than $3.5 million to charity, directed almost $2 billion toward businesses they believe improve people’s lives, and influenced business leaders and financial advisors across the United States in how they think about the purpose of their work.

John found his calling in an unlikely place. An investor and entrepreneur, John has embraced a higher view of business, often quoted by Weinhold: “Business is God’s intended partner in his great work as Provider for all of humankind.”

Jeff Haanen is the executive director of Denver Institute for Faith & Work and contributor to Christianity Today’s online series The Work of Our Hands.

Tags:
Business | Financial Stewardship | Investment | Money and Business | Vocation
Issue:
December 2016, Vol. 60, No. 10, Pg 50, "Investing in the Kingdom"
More From: Jeff Haanen
This article is from the December 2016 issue.