It's not a satire. It's not a comedy. It's not anything, really.
Kenneth R. Morefield|February 5, 2016
Image: Jay Maidment / CTMG, Inc.
'Pride and Prejudice and Zombies'

Pride and Prejudice and Zombies is so devoid of artistic pretense or ambition that I feel as if I have to justify being angry at it. Come on! Look at the title, for heaven’s sake! Were you expecting it to be good? What were you expecting?

I wasn’t expecting anything in particular. But I was expecting it to be . . . something. A satire, maybe. A comedy. A riff or sideways examination of its subject matter.

But Pride and Prejudice and Zombies is none of these things. Its nearest analogue in recent film history is probably Snakes on a Plane. It is a single, pitch-ready joke title in a half-hearted search for a movie to attach to it. I half expected Samuel L. Jackson to show up in a cameo and pronounce that he was “sick of these blankety-blank zombies on this blankety-blank English estate!”

A title credits sequence sets up the premise and could be used as a textbook exhibit in the difference between world-building and exposition. We get some quick maps explaining what parts of England are overrun with zombies and which aren’t. (I’m still not sure I know.) We are told that that the rich study Japanese martial arts while the “wise” study the Chinese ways. The latter conceit shows some promise, though it isn’t really relevant to any other part of the movie except a scene where Lizzie reads The Art of War and sniffs indignantly at Caroline Bingley’s snobbishness.

In fact, the class-consciousness motif ends up being hopelessly muddled, one of several places where the source material and horror genre are at odds with each other. Horror is often thinly (or not-at-all) disguised metaphor for social and cultural anxieties. Frankenstein is about technological advances ... 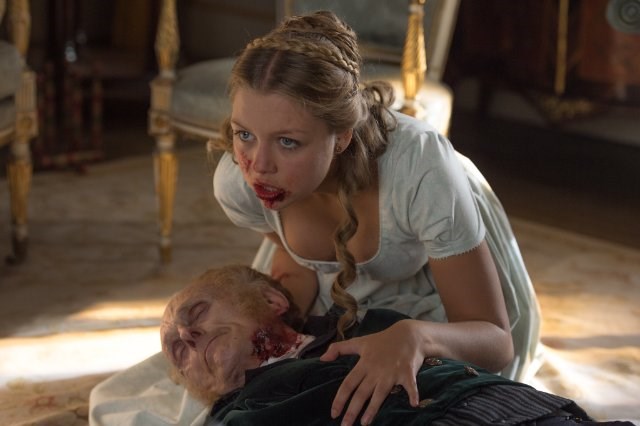