The NBC comedy serves up an unusual take on the afterlife with a side of fro-yo, hold the religion.
Laura Kenna|October 27, 2016
Image: NBC Universal

From time to time, popular culture weighs in with advice about the afterlife. “You can’t take it with you,” admonishes the Pulitzer Prize–winning play by the same title. A popular ’50s polka warns that “in heaven there is no beer.” According to NBC’s The Good Place there is, however, a copious amount of frozen yogurt.

The Good Place, now hitting its mid-season stride, is the latest TV comedy from writer/producer Michael Shur—also creator of Parks and Recreation and Brooklyn Nine-Nine and a writer on The Office. Shur’s wit and his penchant for strongly drawn characters feel familiar. The new series makes a strong break from his run of workplace comedies, however, by setting its storyline in heaven.

Or a version of heaven. Simply called “The Good Place,” it’s an afterlife that exists without a relationship to any of the world’s religions, all of which failed to rightly imagine how to enter the hereafter. Instead a complex logarithm narrows down those granted eternity in The Good Place, admitting only the most elite among do-gooders, activists, and philanthropists. While the series forgoes the concepts of sin and religion per se, it regularly relies on ethical lessons in the hereafter.

This potentially weighty narrative tactic is lightened by the whimsical aesthetic and quirky details of life in The Good Place. The architect behind this particular neighborhood of the afterlife is a supernatural being named Michael (Ted Danson, his impeccable comic timing in force). Obsessively detailed and fascinated by human culture, Michael has worked painstakingly to optimize his corner of the afterlife for his charges’ happiness.

Upon arrival, every one is granted a mansion of their dreams and introduced to their true soul mate. Residents pass their days acquiring skills like learning how to fly or being treated to a perfect re-creation of their favorite earthly meal ever. They also enjoy unlimited frozen yogurt in hundreds of unlikely flavors. 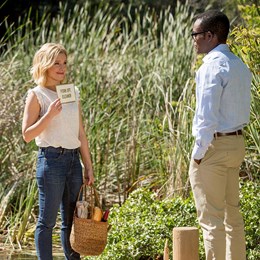 Nonetheless, something is amiss in this corner of eternal happily ever after. That something is a someone named Eleanor Shellstrop (Kristen Bell, more charming as the episodes stack up), who was, among other things, a snake-oil marketer, litterbug, and generally unreliable friend back on Earth.

Admitted to heaven in an unexplained mix-up, Eleanor finds that Michael has her name right, but all the other details of her biography wrong. Now Eleanor must deceive her way through this do-gooders afterlife, trying to keep up a charade of saintliness to avoid being found out and sent to The Bad Place.

Simply flying under Michael’s radar is no mean feat for someone as self-centered as Eleanor. Plus, any unethical act of Eleanor’s seems to gum up the works that keep The Good Place humming along. Following her moral lapses, garbage falls from the sky, for example, or plants burst into flames. At one point a large sinkhole begins to swallow part of downtown.

Good thing for Eleanor, her soul mate Chidi (William Jackson Harper) was an ethics professor in his former life. Facing his own conundrum about abetting Eleanor’s deception or exposing her and participating in her damnation, Chidi resolves to give Eleanor a personal crash-course in ethics.

Through this conceit, the audience gets CliffsNotes versions of tenets of Platonic and Aristotelian philosophy, utilitarianism, and so forth embedded into the episodes. These ethical models become frameworks for Eleanor to test out in her day-to-day mission of blending in.

Of potential interest to Christian viewers: This makes The Good Place probably the only opportunity to sit down with your friends or your teenagers—if you can handle occasional jokes based on sexual innuendo—and have a television show tee-up a conversation for you about how ordinary interactions have ethical weight.

While other sit-coms make hay with dating problems, marital squabbles, and workplace shenanigans, each The Good Place episode revolves around whether or not its protagonist can honorably navigate an ethical challenge, either making progress at living in a way that’s more considerate of others or leaving a trail of evidence that she does not belong. The Good Place treats everyday decisions of Eleanor’s—how she speaks about people, behaves in the yogurt line, does or doesn’t do her share of the chores—as moments that matter.

Further, The Good Place’s entirely works-based model for gaining a happy eternity is satirized as unattainable and exhausting. In this grace-stripped something-like-heaven, the work of being good is never complete.

The New York Times observed the series also subtly questions what difference, if any, there is between learning to look like a good person and actually becoming someone who is good when no one else is around. The majority of what the show treats as her misdeeds reveal the self-centered orientation of Eleanor’s heart.

At its core The Good Place imagines proving oneself a good person on Earth through a variety of selfless choices only to enter an afterlife where one’s virtue is celebrated and compensated with personalized comfort. In a rather ironic and perhaps unintentional twist, the world’s most selfless people are treated to an afterlife that is literally all about them. Having written a deity out of its script for pursuing eternal satisfaction, the show imagines an eternal pursuit of self as a more relatable source of joy. This creates a hiccup in the logic of the series: its own ethical system predicated on selflessness gives way in the last instance to a calculation about what one “deserves.”

The Good Place fails mightily, of course, if we test its theology of heaven against orthodox Christianity’s. Though it’s not clear why we’d feel the need to.

This show is not so much a send up of Christian beliefs as an amusing working out of the peculiar state of the American moral conscience. As critic Alissa Wilkinson once pointed out here at CT, stories about the afterlife “can reinforce an all-too-easy obsession with ourselves—with our salvation, our agency, our problems, our responsibilities.”

This cultural product about the afterlife jettisons religious piety of all stripes but still imagines that some deeds have greater or lesser value than others. In an election season host to many public skirmishes over how to choose “the lesser of two evils,” the fate-determining yet ill-defined ethical points system of The Good Place sounds eerily familiar. The series speaks to a culture that is straddling something like an end to the concept of sin with the strong desire to be reassured that one’s selfless moments still have important consequences indeed—that they will be seen and rewarded, if not in the present then in a far-off someday.

While the series avoids curse words, it still implies them using a running gag by which swears are instantly transformed into other words like “fork,” “bench,” and “ash-hole.” There is a fair amount of pettiness and sexual innuendos played for laughs (not seduction). Flashbacks to life on Earth illustrate Eleanor’s sins including drunkenness, pursuing (off-screen) one night stands, lying, and taking advantage of others. She can also be a real smart ash.

Laura Kenna has a PhD in American Studies and teaches on cultural criticism, film, and writing at Trinity Fellows Academy. She also blogs about popular culture at remotepossibilitiesblog.com where she’s just begun a series on HBO’s Westworld.