Looking for peace in all the wrong places.
Kenneth R. Morefield|September 1, 2016
Image: Courtesy of CBS Films

Near the end of Hell or High Water, David Mackenzie’s tragic and powerful Western/crime fusion, one of its principal characters speaks of being haunted by the events that have transpired over the course of the film.

His adversary suggests the troubled man should confront him again, in a more isolated venue. “Maybe I’ll give you peace,” he says, euphemistically. “Maybe,” the troubled character shoots back quickly, “I’ll give it to you.”

It would be hard for anyone who has ever attended a liturgical church service not to hear in such an exchange a bitter, cruel inversion of the ritualistic “passing of the peace”: the greeting of “peace be with you” and the reply, “and also with you.” It is both strange and yet somehow fitting that in a film filled with violence perpetrated on human bodies that this violence against language could have the capacity to pain the audience in equal measure. 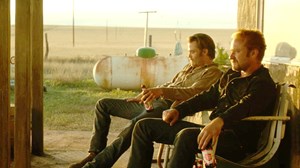 Ben Foster and Chris Pine in 'Hell or High Water'

Hell or High Water begins in medias res. Two masked men terrorize a middle-aged woman opening a Texas Midlands bank. When she doesn’t have the combination for the safe, they lay in wait for the manager to arrive, punching him in the nose despite his cooperation. Gradually their motivation is revealed. Tanner Howard (Ben Foster) is a convict who agrees to help his brother, Toby (Chris Pine), to rob enough banks to pay off a reverse mortgage and the back taxes on their family home. The brothers have less than a week before the bank forecloses on the property, and the stakes are raised by the fact that a contract for drilling oil on the land means the property will soon skyrocket in value.

Even before the film’s final confrontation, characters argue over the meaning of words. Taylor Sheridan, who also wrote the script for last year’s Sicario, has written a script for Hell or High Water that, while not flashy, is keenly observant of the way conflicted humans twist language to try to frame their actions in the best possible light. A waitress refuses to hand over $200 that Toby left at a diner: “It’s only evidence if they are the robbers...until then, it’s my tip.” Toby’s teen son challenges his father over the fact that his words do not square with his deeds: “You tell me not to be like you and then you offer me a beer. Which is it?” In one of the fim’s more on-the-nose manipulations of language, a bank manager robotically and cynically insists to Toby that the bank paid his mother’s property taxes not to have a claim on the property, but as a “courtesy.” It’s the sort of rhetorical inversion that would make a Pharisee proud. Much of Toby’s justification for breaking the law hangs on calling poverty a “disease.” After all, who would blame a father for stealing medicine to save the life of his infected son?

Jeff Bridges and Gil Birmingham in 'Hell or High Water'

As Tanner and Toby try to amass enough money to save the family home, they are trailed by a pair of Texas marshals. Marcus Hamilton (Jeff Bridges) is just a few days short of retirement. He displaces his anxiety by peppering his parter, Alberto (Gil Birmingham), with racial insults. “My teasing is what you are going to miss most about me,” he insists. Perhaps Alberto will miss him; there appears to be some genuine affinity between the two men. But if he does, it will probably be in spite of, not because of, the teasing. Marcus seems oblivious to the genuine pain his words appear to cause. Calling something “fun” or “funny” is just one of the many ways we as humans excuse ourselves for ignoring the admonition to let no unwholesome speech come from our lips (Eph. 4:29). Words may not break our bones like sticks and stones, but they cut deeper than many knives and leave wounds as gaping as the bullet hole one character tries to plug with duct tape.

Nowhere is the cost or consequence of the diminishment of our language more profoundly felt than in a key scene when Tanner and Toby have to separate. “Love you, brother,” Tanner murmers quietly. Then, after a pause, he glances over his sunglasses and adds quietly, “Mean it.” In a perfect world, we could let our “yes” be “yes” and our “no” be “no” (Matt. 5:37), and then, maybe, it wouldn’t be so hard to tell the difference between love and teasing. Then again, in such a world, people who were trying to take our homes from us wouldn’t call it a courtesy.

Another effect of living in a world where language is constantly abused and manipulated is a rise in cynicism and anger. Hell or High Water perfectly captures the darkly humorous ways in which witnesses identify with the robbers, even as they are itching for an excuse to vent their own anger and weild their own concealed weapons in the name of justice. When Marcus asks a group of older men at a diner how long they have been there, one replies, “Long enough to see them boys that robbed the bank that’s been robbing me for 30 years.” Alberto, who is half Native American, opines that what the bank is doing to the Texas residents is no different from what those residents did to his people. They just use foreclosures and predatory lending instead of guns.

Yet for all the empathy invoked for the brothers, Hell or High Water is no Bonnie and Clyde remake, reveling in a “stick to the man” ethos and glorifying the life of crime as something glamorous. Perhaps the most spiritually honest thing about the story is that it portrays the transition to crime as a surrender to the inevitable, not a revolt against unfairness. “You talk like we ain’t going to get away with this,” Toby remarks bitterly to Tanner early in the film. “I never met nobody got away with anything ever—you?” Tanner returns.

Despite the structural similarities to films such as Bonnie and Clyde or In Cold Blood, the films that Hell or High Water most resembles thematically are The Godfather and No Country for Old Men. Those are films about characters who see crime and violence as unfortunate but necessary compromises to their own moral beliefs—and who end up paying a steep price for misjudging just how much of their soul that devil’s bargain will cost them.

The writing in Hell or High Water is so very, very good, but film is collaborative, and even the best scripts need actors who are up to the task. You will probably recognize Ben Foster’s face, but after this movie, you’ll also remember his name. Nothing that Chris Pine has done to date prepared me for how good he is here. Can we hurry up and kill the Star Trek franchise so we can see him in more serious roles?

Then there is Jeff Bridges, who started good and just keeps getting better with age. He delivers the film’s signature moment – a scene that will linger in my memory long after the bombast of a dozen superhero space battles have been duly consumed and forgotten. In a film full of perfectly honed dialogue, there is the briefest moment of silence at a key moment. In it, Marcus passes from sheer sensual exhiliration and triumph to the depths of human misery and despair. His is the look of a man who knows he is falling but has not yet hit the ground, who has seen the match struck but not yet been consumed by fire.

The credits of Hell or High Water play over the final shot as the camera pans down into the weeds and we get a worm’s eye view of the world. Like the rest of the film, this image is simple, yet powerful. Is the sinking to the ground a subtle visual reminder to the viewers of the fate that awaits us all? (As “[I]t is appointed unto men once to die, but after this the judgment.” Hebrews 9:27, KJV) Is it a reminder that there are snakes in the grass? That even the most idyllic and peaceful moments are fraught with dangers we cannot see, and that none of us knows the moment in which we will be called to account for our lives? By presenting us with a point of view outside the normal field of human vision, the final shot invites us to look beyond the present moment, to take a longitudinal view of the characters’ actions and their consequences.

When we take that long view, especially as Christians, maybe we shouldn’t be surprised that those who see no escape from the powers and conditions of the world conflate peace with oblivion.

The film is rated R for pervasive profane langauge and some intense and gory gun violence. There is a flash of (out-of-focus) nudity in the background of one scene, as well as some overt sexual banter. Most of the major characters consume alcohol.