If Pete Holmes’s HBO series Crashing is his love letter to comedy, the church at least gets a tender PS.

Inspired by Holmes’s life and evangelical background, the show follows a nice Christian guy who’s trying to make it in standup after his divorce leaves him dumbstruck and homeless. Episode to episode, his character crashes with Sarah Silverman, Artie Lange, T. J. Miller, and other comics he meets while grappling with the brutal New York comedy scene and his quarter-life crisis. 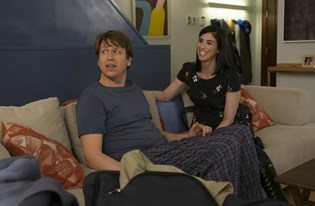 Fans will not be surprised that Holmes’s series, complete with tracks from Joel Osteen sermons and Jars of Clay CDs, puts faith at the forefront. Even though he’s no longer an evangelical, he can’t resist talking about God. Religion constantly comes up in his popular podcast, You Made It Weird. On Crashing—which he produces with Judd Apatow—the TV version of Holmes makes for a likeably, laughably naïve protagonist; he stands by his clean comedy, owns up to being a “God guy,” and explains to his new buddies why he and his ex waited to have sex until marriage.

These days, Holmes, 38, draws inspiration from contemplative Catholic Richard Rohr, spiritualist Ram Dass, and pastor Rob Bell, now one of his best friends. The two go on tour together, and Bell prompted Holmes’s newest project: a book about God.

While his churchgoing days may be behind him, the Los Angeles comic considers himself “a Christ-leaning spiritual seeker” who finds new meaning in the Christian vocabulary and stories with which he was raised. CT online editor Kate Shellnutt talked to Holmes about his new show and the intersection between his faith and his comedy.

Have you gotten much feedback from the churchy crowd about Crashing?

When we were making the show, I was curious to see if people would pick up on all the—I guess it’s redundant to say “Christian Easter eggs,” but—Christian Easter eggs that we hide in the episodes. A lot of the redemption and grace in the story is all sort of inherently Christian.

I think the answer is “yes,” which is great. It would have been a letdown to me, personally, if I had put in so much of that stuff deliberately—and also subconsciously—and then not had it resonate with the group that I grew up in and still have such a warm spot for.

Evangelicals are used to not seeing such positive portrayals of themselves.

It was fun to try and make a character that, in my opinion, is very realistic. He’s a little bit naïve, and he still has some growing to do—but like a lot of people, he grew up with Christianity being the framework for his morality and his worldview, and he wasn’t insane at all. It was fun to show that.

Were there elements in your Christian upbringing and background that gave you an advantage or made you a better comedian and performer?

I think it gave me hope. I was operating under the assumption that all things would be brought to God at some point. Everything working together for some sort of good was something that I believed—and, frankly, I still believe, [though] not in the same simple way that I used to.

When you’re given some sort of framework for suffering with purpose—I’m trying to think of that Paul quote, actually … Isn’t there something like “all things coming together through Christ”? I wasn’t that sophisticated when I thought about it, but my optimism was definitely fueled by my faith, and my faith was fueled by my optimism.

I just happen to be an optimistic person. When other people might have despaired a little quicker, I felt like everything’s going to be okay. Part of that is because I had a pretty charmed childhood, but another part of it was that I looked at God as my—I don’t want to say “copilot,” but—as my cohort in the conspiracy.

When did you realize that comedy was the direction that you wanted to take?

In high school, I knew I loved comedy. I was obsessed with comedy. I went to college thinking I would be a youth pastor, and then because the scene was so dry… and I don’t just mean without alcohol. We were bored. We needed entertainment. They started an improv team, and I did that. It wasn’t just being a big fish in a small pond; it was being a funny fish in a very boring pond.

So, I got this taste of what it was like to be successful. The Christian audiences were, as they should be, a little bit more forgiving, open, and silly. I got that opportunity to thrive…. It was the safety and the boredom of my kind-of lame school—I say “lame” lovingly—that gave me the courage and the belief in myself to make a place for it when I graduated.

Do you think there’s something about Christian hope or the Christian worldview that doesn’t mesh with our understanding of comedy as darker or cynical?

I think one of the reasons why most comedians are atheists is because the job of the comedian is to step outside of anything we might have inherited—anything that might be remotely status quo. Whether it’s marriage, children, religion—whatever it is, part of our job is to step outside of it and make jokes at it. Usually, you extricate yourself from it, and then you have an easier time making jokes about it. I’m fortunate in that I didn’t really have to try to write positive jokes—that’s just my natural comedic perspective.

Comedy, to me, can have no swears but [still] be kind of destructive. Or, you can have comedy like mine, which has swears and stuff in it, and still can be very productive, can be positive. It can actually be light. That’s something that I always wanted to make clear, especially to my Christian fans: I think there’s a big difference between being clean-and-dirty and being ugly-and-light. When I started comedy, I thought the name of the game was being as squeaky clean as possible by 2017 American standards. Now, the name of the game is an undercurrent of positivity, as opposed to an undercurrent of ugliness.

What have you learned about the relationship between faith and comedy from all the people that you’ve talked to on You Made It Weird??

Almost everybody that comes on the podcast says they’re an atheist. This is something I learned from Rob Bell: When someone says they “don’t believe in Jesus,” you talk for ten minutes—and then you realize that you don’t believe in that Jesus either. I think that is a brilliant point. You can hear it episode after episode: They say they don’t believe in God, and I believe them; they’re talking about that sort of Greek idea—the “man on the cloud” sort of thing.

You talk for five more minutes, though, and you find these same people still talk to their grandma. Or they believe in some sort of flow or energy or harmonizing principle—not necessarily an outside intelligence, but something that’s kind of a universal glue, some sort of intent. You dig a little bit deeper, and sometimes you find that these people have extraordinary spiritual experience stories, or what might be like the “moment of conversion.” They just don’t like the language.

Every performer I talk to will, with different words, talk about the sanctity of a good standup show, how it can really feel spiritual. When everybody is laughing, fixed on the same thing, you feel like you transcend yourself. That’s what makes a good comedy show so amazing, and also what makes a bad one so painful: You knew what could have happened, and instead you feel more separate than when you went on. You went on in hopes that they would join you, and you were rejected. Everybody loses. It’s a terrible feeling.

Even the most hardcore atheists will talk about that quality of a good show, of a sacred show. They’ll also talk about the feeling of writing with what I call a “clean antenna,” which means you really feel like you’re receiving inspiration, as if it’s a radio signal. Even if someone is not spiritual at all, you can usually bond and get really excited about those stories where you’re writing a script and a scene comes out of nowhere. You’re probably yanking it from your subconscious, but that feeling of inspiration—everybody says it feels divine.

You and Rob Bell do a lot together now.

I’m a comedian who was going to be a youth pastor, and Rob is a pastor who could have been a comedian. We’re just like separated-at-birth babies. I love Rob’s ability to talk, and he’s inspired me to do the same—to talk, go deep, and really unapologetically try to move, inspire, and heal people.

Rob always says the pastor can go to the perimeter of a topic and infer what he means for the congregation, while the comedian will go to the point of the nerve, and then go five, six, seven, eight clicks in. That’s the beginning point for the comedian.

If you see Rob talk now, you’ll see a different guy: You’ll see Rob being more like a comedian. And if you see me, you’ll see me dipping into his pool. It’s like we’re at the same party, but there are different tables, and I take my chip and I put it in his salsa, and he takes his chip and uses my hummus.

I love what you said on Fresh Air about how nothing we do can increase or decrease God’s love for us.

When I grew up, my model of God was like a lifeguard: I knew he loved me, but he blew his whistle a lot. When I was a kid, I didn’t want to look at pornography, let’s say, because I pictured God doing something else, and then he’d get an email saying, “Pete was looking at pornography.” Now, if I don’t look at pornography, it’s not because I think God is shaking his head and mad at me; it’s because I know that’s not where the juice is. I know life isn’t there. It puts division between me and the people in it. It’s lonely. It’s isolated.

What would you want to tell your younger self after everything you’ve been through?

What I would tell Pete is that the losing it—I really think that’s what Jesus is after when he said, “You have to lose your life to gain it.”

The season finale of Crashing airs Sunday on HBO.