James Cone's seminal book gives a theological response to the dark history of lynchings in America.
Bruce Fields|August 16, 2017
Our Rating

“Do two walk together unless they have agreed to do so?” This question from the prophet Amos is fitting frame for considering the seminal work of theologian James H. Cone, The Cross and the Lynching Tree. The question presumes that two people have chosen to meet because of common interest or benefit, thus, they walk together. But a further question still remains: How long and how far? Cone asks this question of American Christianity in the face of a history of racism and white supremacy, and Cone’s readers may ask the same question of him as they engage his work.

The Cross and the Lynching Tree is the most significant theological perspective on lynching—which includes not just hanging, but also “burning, beating, dragging, and shooting—as well as torture, mutilation, and especially castration.” Based on impressive research, Cone argues that the lynching tree is a viable reality/symbol for reflection on the cross of Christ. According to Cone, understandings of the cross and lynching tree can mutually inform one another and explain how events of trauma and injustice can still inspire hope for the African American community.

The Way of Suffering 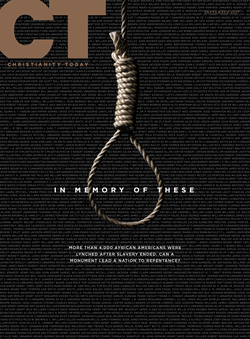 Can a monument to remember victims of lynching lead a nation to repentance? Read our September cover story.

Cone’s book begins by advocating for confronting white supremacy, which is evident even in the church. He claims that the cross placed alongside the lynching tree could “help us to see Jesus in America in a new light.” He first engages lynching in the United States from a historical perspective, which was used a means of reminding blacks “of their inferiority and powerlessness.” Cone then considers the “Christian realism” of Reinhold Niebuhr, seeing a potentially useful theological perspective. Cone applauds Niebuhr’s focus upon matters of “self-interest and power” in human relationships, but faults Niebuhr for not addressing lynching as an obvious example of sinful human abuse.

Cone moves on to discuss how Martin Luther King Jr. saw the cross and the resurrection of Christ as inspiration for his ministry, though ”it did not erase the pain of suffering or its challenge of faith.” Cone then explores the tension between Christian truth claims and the reality of the black experience as expressed in the black literary imagination and also the ministries of women like Ida B. Wells who, at the risk of their own lives, fought against lynching.

Cone concludes with a message of hope: “God took the evil of the cross and lynching tree and transformed them both into the triumphant beauty of the divine. If America has the courage to confront the great sin and ongoing legacy of white supremacy with repentance and reparation there is hope ‘beyond tragedy.’”

Some shared signposts emerge as we walk along together with Cone.

With great insight and passion, Cone draws pivotal parallels between the meaning and function of the cross and the lynching tree on a horizontal, human plane. The commonalities he highlights between the horrors of lynching and Roman crucifixion are appropriate, as both were extremely terrible and painful ways to die that were compounded by the additional pain of humiliation. Lynching was the “quintessential symbol of black oppression in America” while the cross was a symbol of Roman dominance, particularly reserved for insurrectionists. As horrific as the means of death were, the executors desired to communicate a message to those who witnessed the execution. As Cone observes: “In both cases, the purpose was to strike terror in the subject community.”

Conversely, the cross and the lynching tree both share the common heritage of inspiring hope and vision despite the oppressors’ designs to arouse fear and stifle anticipations of justice. Cone correctly identifies them as “symbols that represent both death and the promise of redemption, judgment and the offer of mercy, suffering and the power of hope. Both the cross and the lynching tree represented the worst in human beings and at the same time ‘an unquenchable ontological thirst’ for life that refuses to let the worst determine our final meaning.”

Despite the shadow of the lynching tree, revivalists of justice, like Fannie Lou Hamer, could hold to the cross because, as Hamer says, “I have seen with my own eyes how the symbol empowered black people to stand up and become agents of change for freedom.” Followers of the one who was crucified need not fear those who can only destroy the body (Luke 12:4). God can indeed grant a boldness to address both cruel forms of dehumanization and the sinful lust for power, despite “the valley of the shadow of death” (Ps. 23:4, ESV).

A Fork in the Road

These are signposts that can be passed together as there is much that is mutually informing between the cross and the lynching tree, and Cone makes a strong case on the horizontal, human plane. When it comes to the vertical plane between God and the human community, however, reflection on the Scriptures may call for walking along another pathway.

For African Americans, Cone’s vision may involve the empowerment of lament and forgiveness, ideas he does not address directly in his book. The reality of lament is illustrated by the parable of the servant who owed 10,000 talents (Matt. 18:24–35). There was no way that the servant could pay that amount. His master could sell him and his family as slaves to obtain some payment, but it would never be enough. But the master chose to forgive the debt, astronomical as it was.

There is a similar reality when it comes to the debt accumulated in the United States because of its racist heritage. Some crimes are so overwhelming to the senses and reason itself—inflicting pain and sorrow of unimaginable proportions—that no real restitution can be made for them. Repentance for the sin of racism is appropriate, but much damage has been done. Recognition of this reality through the practice of lament is necessary for healing to begin.

In his book, Born from Lament: The Theology and Politics of Hope in Africa, Emmanuel Katongole conceives of lament as “a complex set of practices or disciplines—a way of seeing, standing, and wrestling or arguing with God, and thus a way of hoping in the midst of ruins.” Lament argues with God, but then leaves matters to him, paving the way for eventual forgiveness. Forgiveness is foundational to the gospel. For the dehumanized, it can bring healing to the soul, particularly to the memory. It can also prevent the dehumanized from becoming dehumanizers. It may take the biblical practice of lament and the difficult discipline of forgiveness for Cone’s vision of hope to be realized.

Additionally, while Cone demonstrates an awareness of the nature of biblical salvation and the essential role of Christ’s death on the cross in order to be made right with God, his assertion that the gospel is a “story about God’s presence in Jesus’ solidarity with the oppressed, which led to his death on the cross” runs the risk of losing sight of the foundational salvific reality of the cross. I would certainly agree that God is deeply concerned for the poor and the oppressed, but I see this as a critical, divine command that flows out of and demonstrates the gospel rather than as the gospel itself.

The cross may indeed speak “to oppressed people in ways that Jesus’ life, teachings, and even his resurrection do not,” but how do we know that we are interpreting this “speech” correctly, unless the cross is continually engaged against the backdrop of sin, forgiveness, and relationship with God? The cross can inspire movement against injustice and dehumanization, but it is also the foundation, along the vertical plane, for reconciliation with God (Rom. 5:10–11).

It is true that the cross has been used to justify needless suffering, but this sinful misuse of the ultimate symbol of God’s love must not obscure Jesus’ call to take up the cross daily (Luke 9:23). Yes, Jesus’ resurrection gives oppressed people “meaning beyond history, when such violence as slavery and lynching seemed to close off any future.” But the resurrection of Jesus is also an establishment of his credentials as the Son of God (Rom. 1:4), and it is the guarantee of our forgiveness from sin (1 Cor. 15:16–19).

Cone acknowledges the vertical reality of personal sin and the Christian call to repentance to receive forgiveness through faith in Jesus Christ, but his focus remains fixed on the horizontal, human plane. However, this vertical call to repentance must continually be emphasized in the Christian proclamation, despite the concurrent need to confront sin in systemic manifestations. Positive response to this call to repent ensures the believer’s relationship with God and the indwelling of the Holy Spirit (Eph. 1:13–14) who alone empowers a life able to respond to the challenges of persistent racism and contribute to the peace among God’s people that Cone envisions at the end of his work:

If we can maintain a balance between the essential foundations of our faith, which empowers authentic Christian living, and the necessary confronting of injustice and dehumanization, we may be able to walk together with Cone further down the way of The Cross and the Lynching Tree.

Bruce Fields is a professor of faith and culture at Trinity Evangelical Divinity School. His areas of expertise include the Epistle to the Philippians and liberation and black theology.