During this 500th anniversary of Martin Luther’s 95 Theses—the Reformation’s start by traditional reckoning—we see extremes. Some Christians are foaming at the mouth like pit bulls, going for the jugular of their Catholic or Protestant opponents. Others are so open-minded that their brains fall out of their heads. Such variety is reflected in books, conferences, and in general discussion of things Catholic and Protestant. Two books published this year offer bright shining examples of how the conversation should be engaged—with warm hearts, respectful attitudes, and seriousness about theological detail. 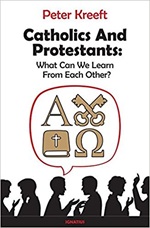 Peter Kreeft, formerly a Protestant, now Roman Catholic, has written Catholics and Protestants: What Can We Learn from Each Other?His style is modeled on Pascal’s Pensées, with short answers and single points to ponder rather than protracted explanations. The book’s message, as Kreeft states, is predicated on the ecumenical vision of Jesus from John 17:21, “that all of them may be one,” a conviction that leads him to approach the conversation as an “Australian sheepdog, herding and hectoring Christ’s separated sheep back to His face.”

This book, like virtually everything Kreeft writes, is a pleasure to read. His prose has an alluring quality. Like an extended display of Italian cannoli and gelato, it commands one’s attention, and after sampling a bit you must have more. Here is a small taste of the refreshingly direct way in which Kreeft exhorts readers to open the Bible and read what it says about Christian unity.

Are you done? Welcome back. But you are not welcome back if you were too busy or impatient actually to do it, if you didn’t have the courage to stop your mental flywheel that was so heavy with momentum. I will give you one more chance. 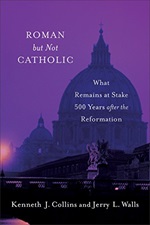 The second book is Roman but Not Catholic: What Remains at Stake 500 Years after the Reformation by Kenneth J. Collins and Jerry L. Walls, both evangelical Protestants. They share Kreeft’s gift for conveying theological substance with clarity, and their work is extraordinary for its far-ranging scope and depth of analysis. Focusing preeminently on Roman Catholicism, it is written to help Catholics become more informed and to encourage Protestants to more earnestly embrace their rich catholic heritage.

Collins and Walls are ideally suited to author this volume. Collins was raised Catholic, spending 12 years in Roman Catholic education before his conversion at 22. From there he became a professional theologian in the Wesleyan tradition. Walls was a graduate student at the University of Notre Dame and later enjoyed participating in the Dulles Colloquium, a discussion group hosted by notable Catholic leaders. This book is thus a tutorial in “deep ecumenism,” an approach to Christian dialogue that does not gloss over important or difficult differences but rather treats them in a spirit of mutual respect and charity.

Roman but Not Catholic addresses the most important questions in the opening chapters: What do Roman Catholics and Protestants share in common? How does Catholic tradition relate to the church’s various traditions? What is the role of Scripture? And is Rome necessary to enjoy the fullness of apostolic faith? Following from these important chapters are 16 more that probe the most significant topics, including church authority, revelation, sacraments, priesthood, papacy, popular Catholic apologetics, Mary, justification, and more. The conclusion, with the book’s title in mind, asserts that Rome’s exclusive claims inevitably lead to “sola Roma,” a self-referential position that detracts from the genuine catholicity of the church.

In both books, questions of authority and salvation come to the fore. Concerning the former, Kreeft unfolds an argument on behalf of church authority for which he is famous. He asserts, “It is simply a historical fact that the Bible came about from the practice of the living church, handed down by tradition.” From this premise, he proceeds to explain that because effects cannot exceed their cause, it is implausible to believe that Scripture can possess more authority than the church, which he understands to have produced and defined the sacred text. Kreeft’s tone changes in this section. Less poetic and inspirational, he clearly wants to make a serious and essential philosophical point. “It’s a package deal,” he contends, “either both scripture and authoritative apostolic Tradition are infallible, or neither is.”

Collins and Walls not only have a response to this general argument; in fact, they interact specifically with Kreeft’s articulation of it.

Collins and Walls go on to evaluate the Roman Catholic argument for authority as expressed by one of its most persuasive spokesmen, John Henry Newman. Looking specifically at Newman’s celebrated work, An Essay on the Development of Christian Doctrine, they describe the Catholic case as “all or nothing.” In other words, because Catholic doctrine is thought to develop and grow over time, the only rational support for Christian faith is found in the institution that has been “put in charge of the Revelation” (Newman’s words), namely, the Church of Rome.

You will have to read for yourself the refutation given by Collins and Walls. Over the course of several pages, they explain why the Roman position is marred by conflation, confusion, and caricature. Concerning their response to Roman authority in general, they make a few points. First, the notion that the church of Christ subsists in the Roman Catholic Church inevitably misdirects attention from the person of Jesus Christ to the institution of the Roman Church. Second, it divides the Lord’s Table and thus obscures the love of God on the basis of ecclesiology. Third, it undermines genuine catholicity by insisting on particular Roman traditions that are foreign to the apostolic rule of faith.

A Matter of Life and Death

While it’s impossible to capture the apologetic nuances of each book in this limited space, I wish to highlight how incredibly helpful it is that both are digging down to this subterranean level, for this is where the most fruitful debate happens. This dialogue, according to both authors, is not just academic but a matter of life and death. Which leads to our second topic, salvation.

Kreeft makes a bold claim concerning the significance of the doctrine of justification at the contemporary Roman Catholic and Protestant intersection. In his chapter titled “Why the Reformation Is Over,” he celebrates the progress of ecumenicists, particularly the work of the Joint Declaration on the Doctrine of Justification (JDDJ), a 1999 agreement forged by Catholic and Lutheran parties. Kreeft calls the JDDJ “the greatest ecumenical achievement in the five hundred years since the Reformation, a truly miraculous achievement, which almost no one thought was possible.” Provocatively, he continues:

The single greatest obstacle to reunion, by far the most important religious difference between Protestants and Catholics, has essentially been overcome. Goliath is slain; it remains only to slay the other smaller Philistines. There are many of them, but none are as big as Goliath.

The supposedly Goliath-slaying JDDJ is certainly a crucial touchstone for Catholic-Protestant discussion. But is it truly a miracle? Not quite. Goliath may appear dead when observers stand on their head and close an eye, but, in fact, traditional Catholic teaching from the Council of Trent is still alive and well.

Collins and Walls have an entire chapter dedicated to the JDDJ, where they rightfully point to the most important issues of disagreement, namely the confusion of justification and sanctification, and the role of faith, merit, and the idea of “imputed” righteousness. In the JDDJ, they argue, justification grows out of a Roman paradigm that excludes Protestants from the communion table. “In such a view,” they conclude, “in which the Roman Catholic Church is ever at the center, even the precious doctrine of justification by faith, as great and glorious as it is, must bow the knee before the Roman hierarchy; it too must genuflect before the wishes of the magisterium.”

So what can Roman Catholics and Protestants learn from each other? Perhaps the main takeaway is this: that the question of where in the world one finds apostolic authority in its infallible form exposes the basic disagreement that continues to demarcate our traditions. Kreeft highlights this difference when he writes, “[I]f a Protestant really cares about scriptural infallibility and authority, he will embrace the Church as its strongest guarantor.” Such statements—and, more importantly, the theology that undergirds them—should give us serious pause when we hear suggestions that the Reformation is over.

But this disagreement should not prevent us from celebrating unity where it exists. Nor should it repress dialogue in which we humbly learn from and honor one another. Jesus’ words remain true and provide an ongoing reason for ecumenical dialogue: “By this everyone will know that you are my disciples, if you love one another” (John 13:35).

Chris Castaldo is lead pastor of New Covenant Church in Naperville, Illinois. He is the author of Talking with Catholics about the Gospel (Zondervan) and coauthor, with Gregg Allison, of The Unfinished Reformation: What Unites and Divides Catholics and Protestants After 500 Years (Zondervan). He blogs at www.chriscastaldo.com.