As a result, the prophetic writings remain a strange land for many Christian readers. But not Micah 6:8. This verse is the stuff of political speeches, Christian kitsch, and bumper stickers. “He has shown you, O mortal, what is good. And what does the Lord require of you? To act justly and to love mercy and to walk humbly with your God.”

The fact that people know this verse from Micah’s sixth chapter and probably not Micah 3:3 (“[You] who eat my people’s flesh, strip off their skin and break their bones in pieces; who chop them up like meat for the pan, like flesh for the pot”) is okay. Micah’s celebrated verse hits close to the heart of the book’s overall concern. In fact, Micah 6 and 7 are circling back to the main themes in focus in the first three chapters of the book. 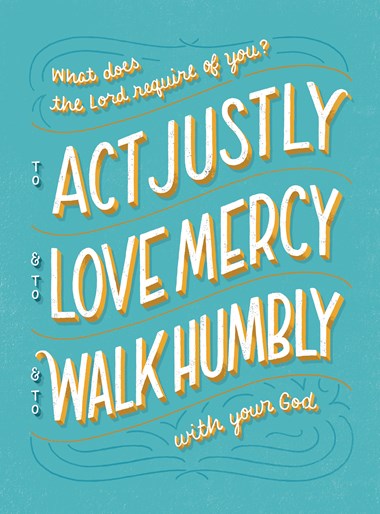 Micah, along with Jeremiah after him, reprimanded the political and religious leaders of Judah who believed Zion (Jerusalem) was indestructible. Like the heretics of the early church, Micah’s religious and political opponents had some of the Bible on their side but not all of it—sola scriptura (scripture alone) and tota scriptura (all scripture) are flip sides of the same coin.

Micah’s opponents loved Psalm 46 but forgot, say, the whole of Deuteronomy. They had forgotten justice, devotion, and circumspection with their God. Micah called them to task for this. Put better, Micah calls us to task for this. Because, left to our own religious and political sensibilities, the banality of evil lurks around every corner.

Micah’s most famous verse appears at first glance as a call to get our act together. “Act,” “love,” and “walk”: This famed triad is a softball toss for sermon outlines and a second passing of the offering plate. But on second glance, Micah’s appeal is better viewed as a plea of affection and devotion from Israel’s God. Micah 6:8 is a lover’s call. It is a lover’s plea in a courtroom drama.

This cosmic courtroom scene begins Micah’s sixth chapter. The mountains and foundations of the earth—representing the totality of creation from its heights to its depths—enter the heavenly courtroom as witnesses. For Lord of the Rings devotees, think Treebeard and his wisdom, perspective, and aged stability. These ancient and wizened witnesses adjudicate the Lord’s dispute with his people.

The scene is heavy and grand, marked by a sense of awe as readers enter a courtroom with cosmic dimensions and looming witnesses in the juror’s box. Despite the mood, the characters of the cosmic courtroom are straightforward: witnesses—the heights and depths of the earth; defendants—Israel; prosecutor—the Lord.

But something shocking happens in the dramatic movement of these first five verses. The prophetic jolt is easy to flit past in a cursory read. I have read (and taught) past it many times myself. When God begins his opening arguments in verse 3, he does so not as the prosecution but as the defense.

“How have I burdened you?” God asks in verse 3. This is the kind of vulnerable question that makes us blush. It indicates relational exhaustion. Job makes a similar accusation against God—“you have worn me out” (Job 16:7). Put in other terms, God asks, Why are you so haggard and exhausted on my account? What have I done to lead to this relational breakdown? Surprisingly, God appears on the defensive.

After the vulnerability and cosmic blushing comes a painting. On a large canvas, the Lord brushes, bold and loose, an impressionistic account of his early redemptive history with Israel. The details are hidden in the painting’s negative space, yet the impression is clear enough. From their redemption in Egypt to their threats in the wilderness to the first night in the Promised Land (Gilgal), God reminds Israel of his redeeming grace.

The vulnerable question—“How have I burdened you?”—takes an ironic turn when readers stand before the swirling colors of this redemptive masterpiece. The question from this perspective is like a parent reminding a complaining child: “Tell me, son, when was the last time you paid our mortgage or bought us groceries?”

The God of the universe chose and redeemed you, Israel. He set his affections and grace on you simply because of his grace and affections. In Ezekiel’s terms, you were the victim of infanticide, left kicking and screaming in your afterbirth (Ezek. 16:1–6). “I passed by and saw you kicking about in your blood, and . . . I said to you, ‘Live!’” (Ezek. 16:6) So, tell me again, Israel, how exactly have I burdened you?

In turn, the people of Israel recognize the force of the Lord’s argument. They too acknowledge the relational breakdown and offer God their religious services in return: sacrifices, oil, perhaps a first-born child or two? But God is not interested. God despises religion, if by religion we mean external rituals apart from “the circumcision of the heart.” Religion of this kind is a species of pride or human self-actualization, and God will have none of it. He’s after something deeper, after something more.

Here is where the Goodyear Blimp’s view of Micah 6:1–8 is so instructive. The rehearsal of Israel’s redemption and grace precedes the call to moral action. In other words, the people of Israel forgot who they were: objects of God’s electing and redeeming grace. They forgot their primary identity. And it is only in recognition of this identity that the call to “act,” “love,” and “walk” makes sense or is even possible. For what else is doing justice and loving mercy than the extension of God’s gracious love into the public square? But once covenantal amnesia sets in, then the very basis and cause of justice disappears. Israel, you forgot me. Israel, you forgot yourself.

In the future, when your son asks you, “What is the meaning of the stipulations, decrees and laws the Lord our God has commanded you?” tell him: “We were slaves of Pharaoh in Egypt, but the Lord brought us out of Egypt with a mighty hand.” (Deut. 6:20–21)

Micah 6:8 is a father’s affectionate appeal to a wayward child: I want what is best for you. I want good for you. Far from an appeal to moral self-actualization—polish those shoes and lace them up tight—Micah 6:8 is an invitation to a life marked by gratitude in light of the knowledge of God and self. As Hebrew Bible scholar Jon Levenson clarifies, “If, moreover, the benefactor wishes the best for his beneficiary, he will discourage him from persisting in the ungrateful behavior that has disrupted the relationship.” Acting, loving, and walking are the fruits of gratitude and grace, not the effects of the morally self-determined.

The last phrase of Micah’s triad may be the key to unlocking the whole. It brings us back to Adolf Eichmann and the banality of evil.

Every English translation follows the King James Version: “to walk humbly with thy God.” Without wanting to get lost in the lexical woods, the word translated “humbly” is obscure. Its only other appearance is in a wisdom context (Prov. 11:2), and this wisdom context has led several, if not most, commentators on Micah to gloss the term within this wisdom frame. The New International Version, for example, provides a note: “or prudently.” Gerhard von Rad suggests the term is better understood as: “measured,” “discerning,” or “circumspect.”

Hannah Arendt’s Eichmann in Jerusalem: A Report on the Banality of Evil provides an unnerving account of unreflective walking. Eichmann insisted in the trial that he was not innerer Schweinehund (an inner dirty “fill in the blank”) but that his conscience demanded of him unquestioning submission to the demands of his superiors. Those demands resulted in the calculated deportation of millions of women, children, and men to their orchestrated deaths.

As Arendt reported, psychologists diagnosed Eichmann as “normal” with familial affections that were enviable. Herein lies the horror. Eichmann loved his wife; he was a good father. He was not a monster. He was banal, unremarkable, and commonplace. This “normal” man could be transformed into the abhorrent perpetrator of humanity’s grossest crimes because his banality and ambition kept him, in Micah’s terms, from a reflective or circumspect mode of being. Absent reflection and circumspection, “normal” people are capable of perpetrating the gravest injustices.

Eichmann’s crimes seem far removed from anything ordinary people would commit. But I write this from Birmingham, Alabama, a city whose civic memory recalls its own banality of evil: a history of racism and violence. The differences between injustice on a big historical stage and small-scale injustices are differences in degree, not in kind. Micah calls the community of faith to the good because, without the gift of repentance, we are all predisposed to an uncircumspect and unreflective mode of being.

Micah 6:8 is not cause for self-righteous finger pointing or public acts of civil service leading to warm embraces of self-congratulation. Rather, Micah’s most famous verse is a lover’s call to the grace of reflection and repentance, to a life shaped from beginning to end by the grace of God shown to us in Jesus Christ.

Mark Gignilliat serves as professor of divinity at Beeson Divinity School, Samford University, and as canon theologian at the Cathedral Church of the Advent in Birmingham, Alabama. He is the author of A Brief History of Old Testament Criticism (Zondervan, 2012).