Our May Issue: Healing a Broken Border

Andy OlsenApril 22, 2019
Image: Caleb Bryan
This article is from the May 2019 issue. Subscribers can read all of CT's digital archives.

As a cub reporter in 2001, I walked into a Mexican restaurant in Nicholasville, Kentucky, ordered an orange Jarritos soft drink, and asked the Honduran-born manager if he would be part of a newspaper profile of the region’s growing Hispanic community.

He didn’t think twice. Soon he and the other employees of Fiesta Mexico, many of whom were undocumented, were smiling in pictures across multiple pages of the local weekly. No one requested anonymity or a pseudonym; they were thrilled for the free publicity. In a probable breach of journalistic ethics, my frequent meals at the restaurant were on the house for nearly a year after that story ran.

Years later, on a late-summer morning in 2017, a team of immigration agents entered Fiesta Mexico looking for a wanted man. They didn’t find him but, under new orders to apprehend anyone they encountered without papers, the agents detained five other workers instead. Nearby Hispanic-owned businesses sent employees home for a couple of days until the dust settled.

The debate surrounding immigration has changed little in substance over the last two decades, only in temperature. The symbiotic rhetorics of identity politics and national security have forced many immigrants further into the shadows, making it much more difficult for journalists (and more importantly, for police officers) to build trust in communities with a significant foreign-born presence.

The public spotlight has perhaps glared no more harshly than in El Paso, Texas, where politicians of all stripes have laid the planks of their immigration platforms before obliging news crews. CT’s Texas-based editor Bekah McNeel worked for months to build trust with sources in that wary border city while reporting ...

Our May Issue: Healing a Broken Border

Our May Issue: Healing a Broken Border
expand
hide this 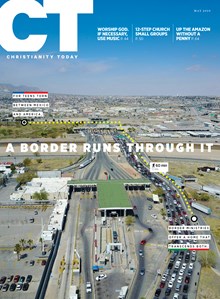 This article is from the May 2019 print issue. Subscribe to continue reading.