They do get Tubman right. Cynthia Erivo plays a militant, headstrong Tubman, and I love that. The film has some wonderful personal touches that show Tubman as a woman, not just as a freedom fighter superhero. Lemmons had to make some compromises to tell a dramatic story in two hours, of course. The parts that are fictionalized are really compilations of other slave narratives that Lemmons read to inform her understanding of Tubman’s life and the lives of the enslaved. So while not everything happened to Tubman the way the film portrays, those things did happen to enslaved women, men, and children. The film presents the threats to families and to enslaved women, in particular.

The film also demonstrates beautifully the depth of Tubman’s great intelligence and fortitude. It shows how her faith sustained her and how her love of family moved her to risk her life over and over again. People respected Tubman, followed her, trusted her, and deeply admired her, and that’s shown well in the film.

She was raised in a deeply spiritual and faithful community—a community imbued with both African and Christian traditions. The seizures she experienced after a near-fatal head injury only enhanced her feeling that God was always surrounding her, loving her, and protecting her. She spoke of how sometimes God spoke to her and guided her and, even though she didn’t always understand the purpose or intent of the message, she trusted God and followed what she heard. Her faith sustained her through her darkest hours of fear, hopelessness, and loneliness.

How does that show up in the film?

The film makes it clear that she trusts God completely, even when she has doubts and fears. When Tubman is leading her brother Robert and others to freedom, she has a vision during a seizure of how to protect her party from harm. Tubman tells her refugees that they can’t cross the bridge and have to go a different way because she now knows that danger is near. They come to the river, and because of her vision, she trusts God to guide her safely across. She starts wading, not knowing how deep the river is. Her brother and the others are afraid, but she keeps praying and trusting that “God will see her through.” She makes it to the other side, and the refugees follow her.

In real life, Tubman did have seizures while conducting freedom seekers north. Her refugees had to wait them out until she recovered before they could move along. It was scary for them. And she did report sometimes receiving instructions from God while having a seizure. This particular scene in the film where they cross the river actually happened, though not when she was rescuing her brothers.

Tubman used African American spirituals deftly in her work. Would you describe how?

Tubman said that she sang a couple of spirituals as signals on the Underground Railroad. Two were “Oh Hail Ye Happy Spirits” and “Go Down, Moses.” Sometimes she would leave her refugees hiding somewhere while she went looking for food or help. She would alter the words a bit or change the tempo as a signal to them that it was safe or not safe to come out.

She also sang “Bound for the Promised Land” as a goodbye song to her mother—which Erivo sings in the movie—and as a signal that she was leaving and running away. There are other songs people have claimed that she used, but we go by what she said. She did not say she sang “Wade in the Water,” for instance, or “Swing Low, Sweet Chariot” on her rescue missions. Only those songs noted above. 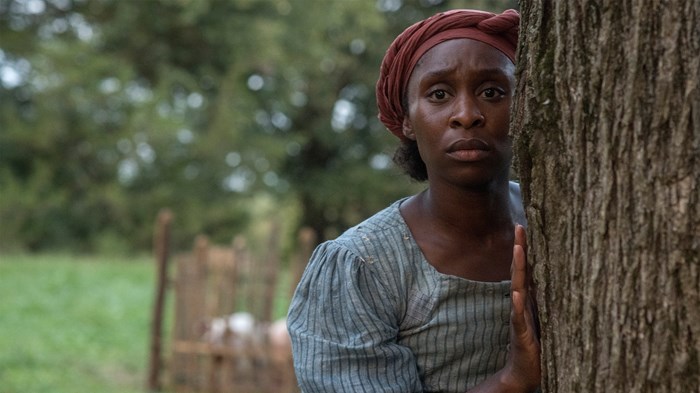 Tubman reminds me of the biblical character, Rahab, who also hid others and deceived leaders for a greater cause. How do you think Tubman justified her subterfuge in her God-given mission?

Because she knew, like other enslaved people, that slavery was a sin. She knew that God intended for her to be free and that God was guiding her to free others. Can’t argue with that!

The movie faithfully portrays the broader slave experience but still alters some of Tubman’s specific story. Can you point to a few scenes that have been changed?

For instance, the bridge escape scene is fictional. In real life, she escaped from Caroline County while working on another enslaver’s property, about 40 miles away from the Brodess farm where she had been leased by Brodess. Also, Araminta changed her name to Harriet when she married John Tubman in 1844, not as part of her “freedom name,” as the film depicts. Historically, we do not know where John Tubman was when Harriet ran away, although the movie does a good job of offering one probable reason why she left without him.

In the film, Harriet’s sister Rachel betrays her, telling the Brodess family that “Minty” is the one helping slaves run away. This isn’t true to life, but it does represent the complicated world for enslaved people who faced threats to their lives and their children’s lives.

While the Brodesses and their slave catchers did not in fact hunt Harriet as portrayed in the movie, the composite characters Walter and Bigger Long accurately represent the danger posed by free and enslaved blacks who were willing to betray friends, family, and strangers for the reward money.

And the fictional main character of Gideon? Of the eight Brodess children, none were named Gideon.

The filmmakers created a character named Gideon, a threatening white man who lusts after Tubman. Although Gideon is fake, the film does a good job of showing the power imbalance between the enslaver and the enslaved person and the particular threat to enslaved girls and women posed by white teenage and adult males.

As someone who’s been studying Tubman for a long time, what other aspects of her character stand out to you?

Tubman was a very strong, determined person who lived with a disability and was still able to accomplish so much. Abolitionists who knew her wrote about her great intelligence and her dry sense of humor. The film doesn’t touch on the last fifty years of her life, but she was an incredible humanitarian, suffragist, and more.

Tell us about what led you to research her life in the first place.

At the same time, my daughter brought home a children’s biography of Tubman. I barely knew about Tubman, and the little book intrigued me. I went to the library to find an adult biography, but the last one had been written in 1943. That set me on a path to researching her life. I found troves of documents related to her history. I’m still finding them, all these years later. The Tubman State Park Visitor Center in Dorchester County, Maryland shares some of that new history with the world.

Jenny McGill is a pastor’s wife and a dean at Indiana Wesleyan University. She holds a PhD from King’s College London, and her books include Walk with Me: Learning to Love and Follow Jesus, a discipleship resource for women.