Earlier this month, 24 couples from Concord Church in Dallas got married. On the same day. At the same time. And on the same altar.

September 8 marked the fourth “Grand Wedding” at the Texas megachurch, the conclusion of Pastor Bryan Carter’s Cohabitation Challenge. For the past decade, Carter has stressed God-honoring relationships among his 9,000-member congregation and sought to resist the cultural forces making living together an acceptable substitute for walking down the aisle.

When couples join the 90-day program, Concord offers them 11 weeks of intensive marriage counseling, a married couple to mentor them for the next year, and an all-expenses-paid wedding ceremony at the end of the journey—thanks to artists, musicians, hair stylists, and financial benefactors within the congregation.

The church has married 81 couples through the challenge, and also offers to cover rent for cohabitating members who opt to live apart rather than making it official. Seven people came to faith as a result of the most recent 90-day program.

“It helps us to model the gospel, because the gospel is redemptive,” Carter said. “It’s not just about us calling out a struggle that people may have, but let’s talk about how I can move from where I was to the place where God is honored.”

As cohabitation continues to rise and more research details the instability of the arrangement for families, churches that champion marriage inevitably have to grapple with the issue. In a 2011 survey, more than half of Protestant pastors said they would marry couples who had been living together. Leaders at churches like Concord want to make that process as easy as possible while also ensuring couples take the commitment seriously. 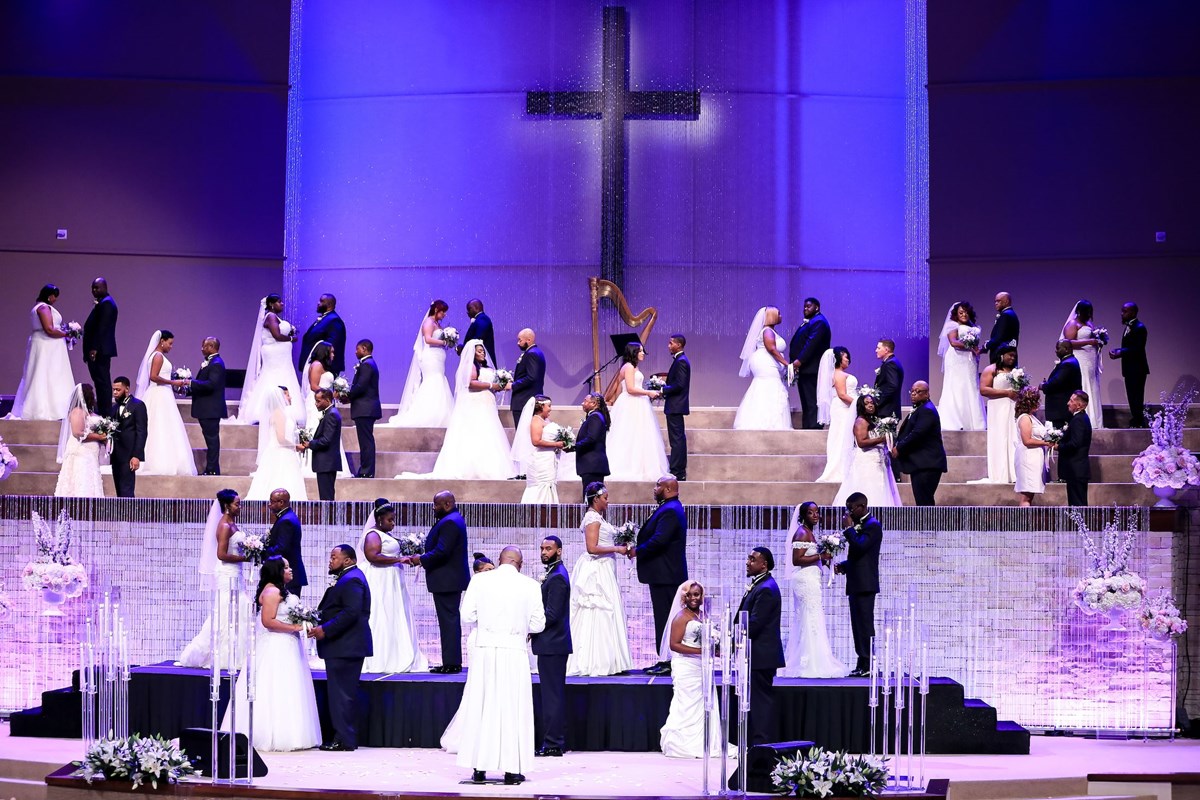 Carter, who has been married for 21 years and lived with his wife for a stint beforehand, spoke with CT about how the Cohabitation Challenge has brought people in his church into a deeper relationship with Jesus.

How did this program first come about?

I was in a series on singleness, and I planned to preach on [cohabitation]. But I didn’t want to preach about it without giving people a pathway forward. And so we just began tossing around ideas, and somehow we landed with: What would happen if we married them?

How do you people qualify for the program?

The initial challenge has three concepts to it. One is, we encourage people to move away from the idea [of cohabitation]. If I’m a believer and I’m trying to do relationships in a way that honors God, I want to take this off as one of my options.

The second idea is we offer for them to move out. Studies show that most people that cohabitate don’t decide to cohabitate; they slide into cohabitation. We offer to pay your first month’s rent should you decide to move out.

The last option is to get married now, and we’ll have you married in the next 90 days. If you feel like the person you’re living with is the person God wants you to be with, but you guys have never taken those next steps, then we’ll put you through 11 weeks worth of counseling and relationship classes, and then once you complete that, you would be eligible to be married.

When I watched the Grand Wedding video, it didn’t feel like you guys were saying, “We just want you married so that it doesn’t look bad.” What’s the ultimate goal?

Ultimately we are trying to help people honor God in their lives. So many of the couples that we talk to, when you ask them why they chose to do [the challenge], many will end up saying, “I just wanted to honor God in my relationship. I want to provide a better example for my son or for my daughter.”

We really think this is one way to hold up a high view of marriage. In today’s culture, marriage has really been diminished. Millennials are not getting married, they have a lot of questions about the entire institution. The divorce rate is still 50 percent. We believe the entire program, the wedding, all of it, is hopefully designed to hold up a high view of marriage based on what Scripture teaches about it. It is a reflection of God. When they see marriage they ought to see Christ and the church. We think if we can help people get to this point, then it helps build stronger marriages and stronger families and stronger churches.

When couples enter the 90-day challenge, are they still cohabitating?

We don’t ask them to move out, we just ask them to sign a purity covenant to try to abstain until the day of marriage.

What do you think is driving so many Christians to cohabitate?

One, because of people’s fears about marriage, they believe that cohabitation allows you to test out the relationship. For others, they will do it for financial reasons. Some have actually replaced marriage with cohabitation. And then another reason is that men are just really failing to initiate and commit to the relationship. For most women, they still long to get married. But they will settle because the man will never take the initiative. He will remain in a cohabitating relationship because it has all the benefits—the sexual relationship and all the other things—so he doesn’t feel a reason to commit.

You said there is a conception among people who have reservations about marriage that cohabitating would help them decide whether they’re making a good choice. How does cohabitation influence a marriage later on?

And then of course from a faith perspective, the sexual temptation and the premarital sex—it’s just an ongoing temptation that you’re going to face. Ultimately you have the reality that cohabitating imitates marriage. It appears to be the same thing, but it lacks the covenant commitment. And at the end of the day when they separate, it has a lot of the same factors as divorce. Because now their finances are intermingled, their lives are intermingled, and that break-up is much more traumatic than it probably would have been had they not chosen to live together.

And I get it, people say well, let’s test it out. And you should test a relationship! But that’s what premarital counseling is for. That’s a better way to do it than to just live together alone.

What advice would you have for churches that may have the same heart toward marriage and cohabitation, but might not have as many resources. How can other churches be a part of the solution?

It doesn’t matter the size of the church; it just matters they have a heart that wants to help people. I would encourage them to preach on cohabitation and its impact on marriage and family, and then, I would then invite those that may be living together—that the church be willing to assist them. And it doesn’t have to be public. It can be private in the pastor’s office, it can be with them and a few friends … I think ultimately we’re trying to help couples step into a God-honoring relationships and a God-honoring marriage. When we lift up the Word of God to them, many of them are like, “That’s what I need. Help me to get there!”

How has your marriage and your background influenced the way you approach couples in the program?

We moved in together before we were married primarily because of financial reasons, and I had some problems at home so I needed a place to stay. It probably gives us some sensitivity and some grace to them, that we understand. When we tell them if you want to move out, we’ll pay your rent, I get to say, “I’m paying your rent because that’s what my brother did for me!”

This past Sunday a young lady walked up to me and said, “Pastor, I want to thank you for the challenge. I moved out.” There’s no telling how many people have taken their own route. I met another guy in the airport one time, and he said “Hey I proposed, I’m engaged! I gave her a ring!” and I was so proud of him! There’s a lot of people that weren’t in the program, they just heard about it and did it on their own. We’re just grateful for however he uses it.

Bryan Carter serves as the senior pastor of Concord Church, a non-denominational congregation with 9,000 members. He was the co-presenter for 33: The Series a curriculum on authentic manhood published by LifeWay and presenter for The Art of Marriage curriculum published by Family Life Ministries. He also leads Dallas’s African American Pastors Coalition.

Maria Baer is a contributing writer for CT and based in Columbus, Ohio.