I occasionally get asked the well-meaning question, “Why aren’t you married?” Setting aside the dubious connection between being likeable and being married, and passing lightly over the assumption that marriage ought to be the goal, and letting them off the hook for rubbing salt into what may well be, for all they know, a wound, there’s a part of me that wants to sit them down and explain the cardinal rule of small talk: You must only ever ask answerable questions.

I might also point out that single women have and always will be an essential part of our social fabric. Women’s History Month, in particular, reminds me that many of the Christian women I admire from the past have been unattached.

The statistics vary across countries and denominations, and interpretations of those stats also vary, but nonetheless, data suggest that at least 1 out of 3 churchgoers is unmarried. Among the singles, the ratio of women to men may be as high as 3 to 1. The gender imbalance is not a new thing, either. Though there’s little consensus on the why, it does seem as though women are slightly more religious than men. As early as the second century, one of the criticisms of the church was that a disproportionate number of women were attracted to it.

Post–World War I Britain offers an illustration of a community awash with what the newspapers termed an “excess” of nearly 2 million women—1,100 women for every 1,000 men. Novels from the period capture this abundance of so-called spinsters, as well as the flourishing of new forms of female independence. One of my favorite examples appears in Dorothy L. Sayers’s detective fiction. Her hero, Lord Peter Wimsey, starts a bureau for “surplus women” under the flappy but formidable Miss Climpson, which deploys otherwise underemployed single women to help with his cases.

Sayers’ tongue-in-cheek portrait of undercover spinsters helps me look at the makeup of our churches in a new light. If there is a statistically significant number of Christian women who would, under other circumstances, be investing much of their time and energy into raising a family, what could that surplus of strength accomplish? It’s just like the God I know to turn an often unchosen and perhaps unwanted circumstance to unexpected good. What task might he be preparing that only an army of Christian “spinsters” would be equal to? (When I floated this idea by a friend, her response was: “I hope he wants us to solve crimes.” We’re keeping our options open.)

Here, then, for inspiration (#spinspo?), is a highly selective list of women who didn’t marry and did do some unexpected, fabulous, sometimes absolutely bonkers things instead.

One of my favorite things about Corrie ten Boom’s story is how seemingly accidental it all was. Her family was first drawn into the Dutch Resistance by caring for one single Jewish neighbor, but they ultimately saved the lives of an estimated 800 Jews and other refugees through a sophisticated underground network against the Nazis. Corrie followed God in faith each step of the way, even to Ravensbrück concentration camp, which her beloved sister Betsie would not survive.

After the war, Corrie set up a rehabilitation center for collaborators as well as survivors of the camps, famously forgave her Ravensbrück guards, and traveled the world speaking about forgiveness and hope well into her 80s.

When I first read The Hiding Place as a teenager, I pictured Corrie as an old lady when the war and her “adventures” began. She was actually in her 40s. Though in her early 20s she was devastated when the man she loved married a rich girl instead, later she believed God had set her apart for a single life.

As she spoke around the world after the war, Corrie would often hold up a piece of embroidery to audiences. On the back was a mess of tangled threads; on the front, an intricate golden crown. “Although the threads of my life have often seemed knotted,” she said, “I know, by faith, that on the other side of the embroidery there is a crown.”

In the fourth century, Gregory of Nyssa penned the story of his sister Macrina after her death to honor her brilliance and piety. Just 12 years old when her betrothed died, Macrina resolved never to marry. Her father died soon after, and she became the de facto leader of the family, supporting her mother and guiding the development of her brothers. Two of those brothers—Gregory of Nyssa and Basil of Caesarea—became influential theologians known as the Cappadocian Fathers.

When Basil came home from his extensive schooling in rhetoric “monstrously conceited” and full of “self-importance,” it was Macrina who put him in his place. Gregory himself tells of how his sister chastised him when he complained to her about the burden of his work: “Do you not even realise the true cause of such great blessings, that our parents’ prayers are lifting you on high, for you have little or no native capacity for this?” There are some truths only a big sister can tell you straight.

Does Gregory’s account of his sister tend to the hagiographical? Sure. But it’s a beautiful picture of a life suffused with love for God. And her singular focus on him was surely shaped by her singleness. On her deathbed, writes Gregory, Macrina “seemed to transmit the desire which was in her heart to rush to the one she longed for … For it was really to­wards her beloved that she ran, and no other of life’s pleasures ever turned her eye to itself away from her beloved.” 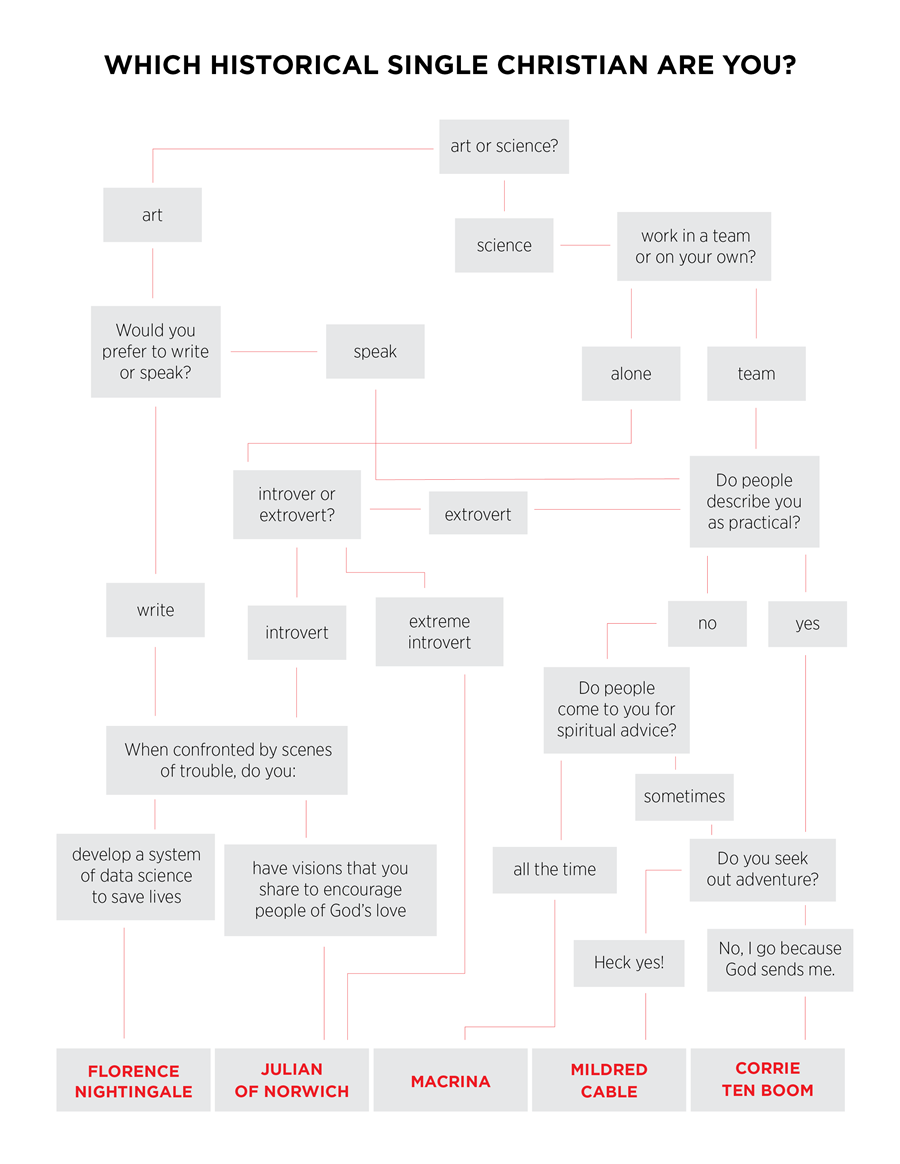 The woman who revolutionized the nursing profession is often remembered as “the lady with the lamp,” drifting along the corridors of the hospital at Scutari during the Crimean War, an icon of gentle, feminine care. That picture, however, doesn’t give the full story.

As an upper-class woman, Nightingale was expected to make a brilliant society wife and was certainly not expected to pursue a profession, let alone one as disreputable as nursing. After she rejected her suitor, Richard Monckton Milnes, Nightingale also rejected the path laid out for her in order to pursue what she was convinced was a call from God.

Despite poor health and all kinds of opposition, her superabundant energy found its outlet in reforming the practice of nursing, becoming a leading expert on sanitation, designing hospitals, tackling irrigation and famine, and campaigning against laws that victimized women. She was also the first female member of the Royal Statistical Society.

Her little-known essay “Cassandra” (which influenced Virginia Woolf’s feminist classic A Room of One’s Own) is a scorching indictment of the forced idleness of mid-Victorian womanhood, and still well worth a read:

For Nightingale, at least, singleness proved a necessary condition for entering into these “spheres of action.”

The age of the unmarried female missionary peaked perhaps somewhere around the early 20th century, in part because mission work opened a field for women to do things they often couldn’t at home. One who took full advantage of this opportunity was the English missionary Mildred Cable.

Though her family was not thrilled about it, she became convinced of her calling while still at school. She completed medical studies in London in preparation for joining the China Inland Mission in 1900 but faced a serious setback when the Boxer Rebellion broke out. Her fiancé, who had also planned to become a missionary in China, decided not to go and suggested they marry and stay in England. Mildred chose China.

Alongside sisters Evangeline and Francesca French, Cable spent almost 20 years working in Shanxi Province, investing in the education of women and girls and working against practices like foot-binding and female infanticide. Over the following years, the three traversed the length of the Gobi Desert five times, befriending local people and “gossiping the gospel,” as they called it, with everyone they encountered. They studied the Uyghur language to communicate with Muslim women and were at one point detained by a warlord who demanded they treat his wounds.

While European explorers tended to travel in the region with large caravans and armed guards, Cable and her two companions simply loaded their mule cart up with Bible tracts and set out on their own (or with a few Chinese colleagues), undeterred by the hardships of travel or even civil war raging around them. (As every single gal knows, one of life’s challenges is finding a good travel buddy or two.)

For those who, like me, find Mildred’s indomitability a tad daunting, here’s one for the introverts and the homebodies. Think of her as the patron saint of social distancing. Julian of Norwich was a 14th-century woman who walled herself up in a little cell attached to St Julian’s Church in Norwich at the age of 30. She passed her days in prayer and counsel, giving spiritual wisdom to those who stopped by her window for guidance.

I’m cheating a little here, since we don’t know for sure that Julian wasn’t married. (In fact, we know almost nothing about her—including her name. We refer to her by the name of the church where she became an anchoress, as the walled-in were called). She may have lost her husband and children to the Black Death. But if you spend up to 60 years on your own in a tiny stone cell, it doesn’t get much more “single” than that.

Some of these five women were intrepid, others retiring. Some eagerly chose singleness, others endured cruel disappointment or agonized over their options. But all of them believed firmly in the goodness of God and in his absolute and tender claim on their lives.

And for every one of them, I can think of several thousand questions I’d want to ask ahead of “Why aren’t you married?”

Natasha Moore is a research fellow at the Centre for Public Christianity in Sydney and the author of For the Love of God: How the Church Is Better and Worse than You Ever Imagined.