This past year, Montenegro witnessed a phenomenon unprecedented in its history. Nationwide nonviolent street processions rallied against a new Law on Religious Freedoms, drafted—many believe—to divest the Serbian Orthodox Church of its historic churches and monasteries.

There is no unified view on these events. Some say the marches defended human rights; some say they were a form of clerical fascism.

Personally, as an evangelical pastor in Montenegro, I prefer to call the protests a revival in the making.

Their informal leader, Metropolitan Amfilohije, passed away October 30 at the age of 82. He is the highest-ranking Christian cleric worldwide to have died from COVID-19 complications.

The metropolitan was an iconic figure. He was a man of great internal strength, remarkable intellect, iron-like determination, and fascinating zeal. But he was also accused of political agitation, hate speech against Muslims and ethnic Montenegrins, and—as the former Yugoslavia dissolved into bloody conflict in the 1990s—uncritical support to the “Serbian cause.”

He was called Dedo (“Grandpa” in Serbian) by the Orthodox faithful, and was compared to Moses, leading the people from Egypt. He may well be canonized as the next Serbian Orthodox saint.

His funeral rallied thousands of people to the capital, Podgorica, in the midst of a pandemic, when Montenegro was one of the most infected countries (per capita) in the world. With emotions at their peak, people neglected social distancing and face masks. His dead body was displayed in an open casket, as throngs of people touched and kissed it in veneration. Following the service, they took Communion from a single spoon.

It was not the first time. During the Easter fast, when COVID-19 numbers were low but hysteria was high, the metropolitan led the same practice. This tradition, dating back to the first millennium A.D., is believed to be perfectly safe by Orthodox believers, as “no virus can survive” Holy Communion. [Editor’s note: The head of the Serbian Orthodox Church, Patriarch Irinej, died after testing positive after leading prayers at the funeral.]

Disagreement did not come from secularists only. Many religious leaders, including evangelicals, swiftly switched to online services. Whatever our belief, let us not forget that once the Lord returns, he will come for the faithful, not the knowledgeable. 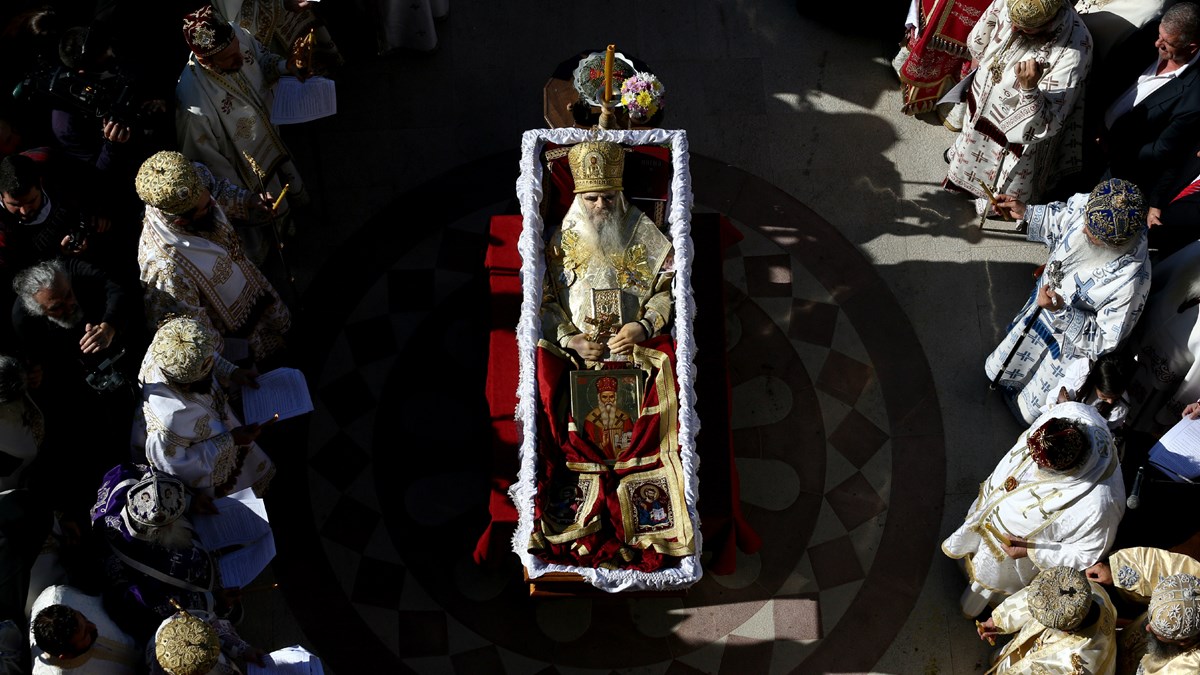 Right or wrong in such matters, Metropolitan Amfilohije’s life was full of biblical symbolism. Born on Serbian Orthodox Christmas in 1938, he was named Risto Radovic, with his personal name meaning “Christ” in the rural, folksy local dialect. He is said to have embraced faith in Christ at a very young age, akin to the early calling of some of the prophets. And just like Moses, he never entered his Promised Land, dying shortly before the new government made victorious by his protests was formed.

When I think of his life, two verses from the first chapter of 1 Corinthians come to mind.

Small and physically fragile, Metropolitan Amfilohije was the driving force behind the rebirth of the Orthodox Church in Montenegro. During his first year of service in 1991, the church had only 19 priests. Today more than 1,200 priests serve in 600 churches and monasteries, many of which he rebuilt.

Once decimated and in ruins, the Orthodox Church in Montenegro became a respectable foe to the Montenegrin government, whose uncontested rule seemed indisputable. With the Law on Religious Freedoms, the rivalry turned into an open conflict. But in a reversal of the biblical story, it was an 82-year-old “David” who defeated a younger and stronger “Goliath.”

In post–World War II communist Montenegro, there was little as lowly and despised as a devout believer in Christ. And that is exactly what young Radovic was.

Every civil war leaves deep scars in the people’s consciousness and a country’s soul. The Orthodox Church largely supported the nationalist forces, and therefore the clergy suffered reprisals after the communists took power. Many priests and monks were executed, including the metropolitan at the time. Churches were forcefully shut down and turned into schools, warehouses, and even barns—with animal feces under holy icons.

In such an atmosphere, openly confessing faith resulted in stigmatization, marginalization, persecution, and in many cases, imprisonment. But adhering to Orthodox tradition, Radovic persisted along with his family, and despite all odds left his native Moracha—home to a medieval monastery—to study at the Orthodox seminary in Belgrade. He took his monastic vows in 1967, and in 1985 was installed as bishop of Banat, a diocese in Serbia.

By Orthodox standards, the fruits of Metropolitan Amfilohije’s ministry are plentiful, and in death he will be revered even more.

But from a strictly evangelical perspective, the church he led has only just scratched the surface of unbelief and godlessness.

The same masses who chanted “We will not give up our holy places” are still largely uninformed about their faith, with most unchanged and unreached with the gospel. The Orthodox infrastructure is impressive, but there is far more effort put into physical—rather than spiritual—rebuilding. (The Orthodox argue that one encourages the other, and there is some truth here.)

In spite of all Orthodox church efforts to “Christianize” Montenegro, they consistently fail to “evangelize.” Everything ends with collective religion, rather than personal spirituality. People are largely unaware of the necessity of repentance, leaving them vulnerable to popular deceits such as strident nationalism and the equation of faith with proper ritual and holiday observance.

Among the many accomplishments of his lifelong ministry, Metropolitan Amfilohije’s crowning achievement will most likely be political. He was the decisive force that overturned a political structure that ruled for 30 years, winning freedom for his people.

Evangelical-Orthodox relations started off on the wrong foot back in the 1990s. The Orthodox did not take evangelicals seriously due to our small size and generally didn’t consider us to be a real church. Our interactions were sporadic and not always pleasant.

But now, months of street processions have returned religion to a heavily secularized Montenegrin society. All of a sudden, it has become easy to get into a conversation on faith and spiritual topics. We ought to thank the Orthodox church for this.

Our true encounter has yet to happen.

My hope and my prayer is that when it does, the Orthodox will not see us as a threat. The task of reaching Montenegro for Christ is too great for any single denomination. The time is short, and the enemy of the gospel is strong. There is no place for animosities, self-righteousness, or spiritual arrogance between churches. No one can claim a monopoly on God or put the Holy Spirit into a pre-designed box.

We should not be in competition. Our theologies differ, but we are coworkers in the gospel.

Sinisa Nadazdin is pastor of Gospel of Jesus Christ Church in Podgorica, Montenegro.