Last November, when the General Assembly of the World Evangelical Alliance (WEA) took Sunday off for worship and relaxation near Jakarta, Indonesia, a group of top leaders did something different. We got in a van and traveled to the offices of an Indonesian Muslim youth organization.

There we spent several hours in stimulating conversation with a group of Muslim intellectuals. Afterwards, at dinner, we were joined by Indonesia’s ambassador to the United States.

Why would WEA leaders pay so much attention to a group of Indonesian Muslims? And why would our hosts and even a high government official be so interested in welcoming us? Two reasons.

First, both we and our Muslim counterparts are idealists. We share a vision of a world in which people are free to choose their religious belief without risking their lives.

Not just any Muslims

Our conversation partners were not just any Muslims. The most prominent figure among our hosts was Yahya Cholil Staquf (Pak Yahya), who served 20 years ago as press secretary to Indonesian President Abdurrahman Wahid. Pak Yahya is now the general secretary of Nahdlatul Ulama (NU), a 94-year-old Muslim organization that claims 90 million adherents worldwide.

NU formed as a reaction to the rising influence of Wahhabism, the more puritanical version of Islam that had come to dominate what is now Saudi Arabia. Many Indonesian Islamic leaders received training in Saudi territory, so Wahhabi repression and persecution of more broad-minded Muslims had a direct effect on them.

Over decades of seeking to counter Islamic extremism in Indonesia, NU leaders realized that to achieve their goals, they had to directly challenge the radical versions of Arab Islam. As Pak Yahya puts it, “Whenever we defeat the threat in Indonesia, they get outside reinforcements.” 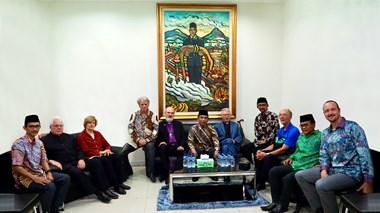 NU leaders explained to WEA leaders the meaning of a painting which embodies Muslim-Christian friendship by depicting Sukarno, the leader of Indonesia's fight for independence, holding the dead body of a fallen Christian comrade.

Over the past five years, NU leaders have crafted a series of documents of great intellectual depth that challenge, from a well-established Muslim perspective, the tenets of Islamic extremism. They contend that from its founding up to the 15th century, Islam evolved to deal with constantly shifting cultural circumstances through ijtihad, or independent legal reasoning, but that the faith then became ossified and resistant to change.

This is why, as their 2018 Nusantara Manifesto states, “A wide discrepancy now exists between the structure of Islamic orthodoxy and the context of Muslims’ actual (lived) reality.” Specifically, Islamists in many countries are trying to restore a caliphate, exterminate “infidels”—including followers of less extreme versions of Islam—and impose sharia law on a globalized, pluralistic world. 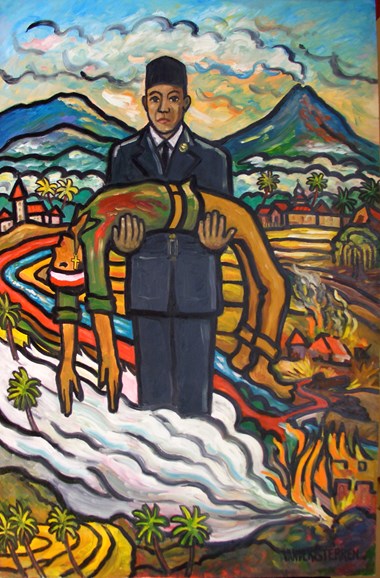 In contrast, NU leaders’ vision of “Humanitarian Islam” proposes a clear distinction between eternal or universal religious norms and contingent, temporary norms. In their view, the obligation to show universal love and compassion is unchanging; the obligation to compel obedience to Islam by military force or to execute apostates is contingent and no longer relevant to the modern context. (It’s a parallel to Christians’ belief that the Ten Commandments are universal but Old Testament penal law no longer applies.)

If you’ve never heard of NU, you should read Christianity Today more closely. This magazine reported on Pak Yahya’s meeting with US Vice President Mike Pence in May 2018, after which Pence promptly tweeted a photo and the message, “Trump’s admin stands with NU in its fight for religious freedom and against jihad.”

Why we need Muslim partners

My route to this collaboration between the WEA and Humanitarian Islam began on a sad note. In April 2007, as I was preparing to teach a theology course for a school in Turkey, I received an email informing me that one of my students had been martyred in the “Malatya massacre” of three believers at a Christian publishing house.

In response to this tragedy, I sought to become more deeply involved in practical advocacy on behalf of Christians undergoing persecution (including helping to organize a historic 2015 conference in Albania). But I quickly realized that Christians have very little leverage to reshape the prevailing mindset of the Islamic world. Simply because we are not Muslims, our message is delegitimized—especially among those prone to radicalization—before we even open our mouths.

To make a practical difference for those living in Muslim-majority countries, we must join hands with Muslims who believe in religious tolerance and help them show their colleagues that adopting a posture of humanitarian respect for all people is in their best interest and not a betrayal of their faith.

My search for suitable co-advocates led me to NU. Other voices within Islam are also calling for peace and tolerance, but no one else has developed such a solid philosophical foundation that could undergird the global spread of a more peaceable form of Islam. 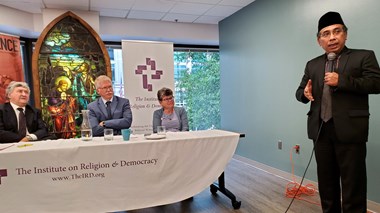 Pak Yahya (right) and Thomas K. Johnson (middle) speak at a July 2019 side event to the Second Ministerial in Support of Religious Freedom in Washington DC.

The benefit of our collaboration quickly became apparent in March when my colleague Thomas Schirrmacher, who will become the next WEA secretary general in a few months, was invited to The Gambia, a small west African nation that is about 95 percent Muslim but has a visible Christian minority. The possibility of writing sharia law into the country’s new constitution was causing alarm for both Christians and tolerant Muslims.

Schirrmacher found that some Muslim leaders in the Gambia had already heard about—and were favorably impressed by—the WEA’s alliance with Humanitarian Islam. The engagement demonstrated that Christians and peaceful Muslims, although they often have cultural differences and misunderstandings to overcome, can be more politically effective and more persuasive in many countries when they work together.

We also discovered that many Muslims who want to support peaceful coexistence struggle to articulate solid arguments for their case when confronted by radicals who insist that theirs is the pure version of Islam. That’s exactly where NU’s well-conceived foundation for a friendlier Islam can be helpful.

How evangelicals can partner with Muslims

Toward the end of our dinner with NU leaders in Jakarta, Brian Stiller, the WEA’s global ambassador, stood up and said he wanted to make a comment. Several of us laughed, because we knew what was coming. Brian has a consistent practice, in a very gracious manner, of reminding interfaith partners of what Christians believe and encouraging his friends to consider Jesus Christ’s claim to be Lord of all.

None of us on the WEA side overlooks that message. We all want our friends to know Christ. But in that case, why should we spend so much effort recommending a group of Muslims as a key ally in pursuing global peace and coexistence?

First, it is in our interest as reconcilers for Christ to promote and encourage all peacemakers. Our theology of common grace calls us to support anyone who seeks an end to religious violence, especially when they do so from a clear, principled philosophical foundation that acknowledges—much as the apostle Paul did in the first two chapters of Romans—the existence of a natural moral law to which all people are subject.

Some would say that Islam is inherently a religion of jihad and bloodshed. NU’s Humanitarian Islam movement proves otherwise. We have crucial religious differences, but these Muslims are seeking to enable people to live together in peace, and we should applaud them for doing so.

Beyond that, NU’s philosophy firmly endorses the right of all people, including Christians, to live out what they believe. If we care about the millions of Christians who live in restrictive environments—many of them in Muslim-majority countries—this goal should be at the top of our agenda.

Even relatively moderate Muslim nations, such as the United Arab Emirates, that permit expatriates working in-country to freely practice other faiths grant no similar freedom to their own citizens. By comparison, Indonesia is a breath of fresh air: an 87 percent Muslim nation where the Christian population is growing and where NU is okay with that. How can we not endorse such a stance?

The bold, admirable leaders of NU are not my spiritual brothers, but they have become close friends. They are also our most strategic allies on issues that are central to the flourishing of Christians and of humanitarian values globally.