As pastor of Atlanta’s historic Ebenezer Baptist Church, Raphael Warnock said he never felt the pressure to fill the shoes of his famous predecessor, Martin Luther King Jr. But he does “stand on his shoulders.”

Warnock is the fifth and youngest inhabitant of the pulpit of the 134-year-old church, both a National Historic Site and an active Progressive Baptist congregation. Ebenezer Baptist famously was co-pastored by King and his father, Martin Luther King Sr., or “Daddy King,” from 1960 until the civil rights leader’s assassination in 1968.

Though “times are different than they were then, there are many of the same challenges,” Warnock told Christianity Today in the midst of another wave of activism around policing, voting rights, housing, and health care for black Americans. “But we have to rise to [the next] one while finding inspiration in what they’ve done.”

After 15 years at Ebenezer Baptist, Warnock’s present challenge is running for US Senate in Georgia. The issues he hopes to address in office are many of the same ones that troubled an Ebenezer college student named Lonnie King Jr. in 1960. With fellow black student activists, Lonnie King decried racial discrimination in “An Appeal for Human Rights,” which ran in local papers as well as The New York Times and was a catalyst toward desegregation in Atlanta.

The contemporary civil rights movement is more diffuse and its leadership less religious than in the days of the marches led by ministers and Christian students in the 1960s. But today’s black church leaders are still building on the political legacies of their forerunners, and Atlanta showcases many of the historic parallels.

“This moment is foremost a moral crisis, but it is also political one,” Warnock said. “The nation could use a moral voice, and the Senate could certainly use a pastor.”

At Ebenezer, he led an interfaith coalition to offer free record expungement to people whose arrest records hurt their employment and housing prospects. As a senator, Warnock plans to prioritize bipartisan efforts to end mass incarceration. Campaigning for November’s special election, the Democratic candidate is the latest in a long line of black faith leaders and pastors in the state whose faith led them into politics. (Warnock served as pastor to another famous preaching politician, the late US Rep. John Lewis.)

“Atlanta’s long and courageous struggle for social justice has always and continues to this day to include faith and activism because of a tightly knitted web of relationships between black institutions,” said Walter Earl Fluker, professor at Emory University’s Candler School of Theology.

Political candidates and community organizers cite a sense of mission—their desire for the peace, justice, and neighborly love that define God’s kingdom—as they march and mobilize against the systems that threaten their communities. In the wake of the killings of George Floyd, Breonna Taylor, Ahmaud Arbery, and Rayshard Brooks, devout African Americans are responding not just in prayer and lament but also in the streets and the voting booths. They believe the God who values all people as made in his image, who champions the vulnerable, would have them speak up and act.

In Atlanta, that political conviction against racial injustice dates back to at least 1868, when African Methodist Episcopal (AME) Bishop Henry McNeal Turner was elected to the Georgia legislature as a Republican.

“Because God saw fit to make some red, and some white, and some black, and some brown, are we to sit here in judgment upon what God has seen fit to do?” he challenged lawmakers, arguing that it was only just for men to have a say in the laws that might take their lives or the lives of their families. “As well might one play with the thunderbolts of heaven as with that creature that bears God’s image.”

The former Civil War chaplain was one of 33 black legislators expelled from the statehouse by white politicians, and hope for full citizenship rights for black people in this country dwindled.

In the absence of political power, black Christians historically turned to the church. “In lieu of not being able to engage in traditional politics, black people used their faith to organize and force society to hold to its ideals of democracy and freedom,” said Candler student Darrin Sims, a fellow with the Georgia Justice Project.

Black washerwomen relied on the church as they rallied to strike for better wages in 1881. Black women working at the Scripto factory did the same more than a half century later. Many were members at Ebenezer and had the backing of Martin Luther King Sr. when they unionized in the 1940s. And they had the backing of Martin Luther King Jr. when Mary Gurley, a prominent member of the church, led another Scripto strike in 1964.

According to University of Texas political scientist Eric McDaniel, black pastors and churches across the country are politically engaged “on a variety of issues, like fair housing and anti-discrimination laws, because their members are calling upon them” to help. The church also serves as a place for voter outreach, registration, and education. Today’s black Protestants are three times more likely than their white counterparts to hear about political candidates at church, a Pew Research Center survey shows. 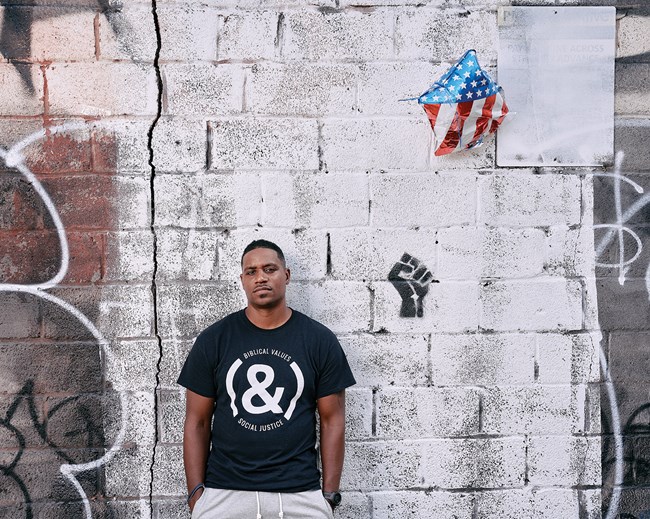 Historically, black pastors were middle class and well educated, so they were in a position to advocate for their community’s needs. Fluker noted that churches like Friendship Baptist, as well as Wheat Street Baptist, Ebenezer Baptist, and Big Bethel AME—all located on Auburn Avenue, the center of black life in Atlanta for generations—helped build the civic and social capital from which black Atlantans today still benefit.

The leaders of these historic churches were involved in landmark interracial cooperation efforts after a 1906 riot. But young student activists criticized the old guard, including Martin Luther King Sr., for accepting incremental changes. In the 1960s, the Atlanta Chamber of Commerce adopted the slogan “the city too busy to hate” in contrast to more brutish government responses in Memphis and Birmingham, though many white business leaders—more pragmatic than progressive—did not actually welcome integration.

Bobbi Simpson, a former candidate for the Georgia House of Representatives and political consultant, said she got into politics to “provide hope for the poor and call for repentance where governmental or ecclesial leadership has failed to live out biblical commands.”

“Luke 4:18–19 and Amos 2:6–7 speak of God’s love of the poor,” Simpson said. “The poor have been criminalized for far too long, and the church has been complicit either by apathy or by silence.”

Attorney Justin Giboney sees the black church’s theology, particularly its focus on the Exodus narrative and the Great Commandment, as playing a crucial role in spurring political activism in his city. He leads the And Campaign, an Atlanta-based movement calling on Christians to stand for human dignity and justice in public policy. In many ways, the And Campaign reflects traditional black Protestant politics like those of Henry McNeal Turner—a commitment to both justice and morality.

The And Campaign’s positions span from assisting families to addressing poverty and reforming the prison system, and Giboney advises Christians to see political parties as tools, not as identities. Still, he believes all kinds of civic organizations can work toward gospel ends. “If there is something in my sphere of influence and my neighbor is hurting, and there is something I can do about it and I do not, that is unfaithful,” he said.

Martin Luther King Jr. encouraged Christians to not only “play a Good Samaritan along life’s roadside” but “to see that the whole Jericho road must be transformed.” Atlanta leaders told CT they see that philosophy reflected not only in King Jr. and Coretta Scott King’s legacy, but in a whole generation of civil rights leaders like Juanita Abernathy, Julian Bond, Maynard Jackson, John Lewis, C. T. Vivian, Joseph Lowery, and Ella Baker.

Area pastors make that kind of community and societal transformation a core part of their ministry, with politics being one major way to improve their Jericho roads. Sammie Dow, senior pastor of Pleasant Grove Missionary Baptist Church in Marietta, Georgia, organized a letter-writing campaign, trained members to offer public comments to local legislative bodies, and mobilized members for protests while encouraging them to be active voters.

“Activism is the responsibility of anyone, especially black people who profess to be followers of and in relationship with Jesus Christ,” said Dow, a former national director of the NAACP Youth and College division.

Black clergy in Atlanta are ramping up efforts to make sure their members vote and to protect the hard-won rights that leaders like Lewis fought for. The Skinner Leadership Institute and the National African American Clergy Network are sponsoring “Turnout Sunday” in several states, including Georgia, rallying church leaders to pray and share election information.

“We must use our position and influence to teach, motivate, empower, and challenge our members to care about the lives of others, to advocate for justice and equity, to be actively involved in the community and helping to shape its direction through our vote,” said Cynthia Hale, senior pastor of Ray of Hope Christian Church in Decatur, Georgia. Her church sent out cards with information about voting.

In his book Across That Bridge, Lewis wrote, “The power of faith is transformative. It can be utilized in your own personal life to change your individual condition, and it can be used as a lifeline of spiritual strength to change a nation.”

Serving the God of the Exodus and the Son whose anointing set the captives free, black Christians are working to change their neighborhoods, their cities, their states, and the nation—one vote, one protest, one march, one community meeting at a time.

Kathryn Freeman is an attorney and former director of public policy for the Texas Baptist Christian Life Commission. Currently, she is a Master of Divinity student at Baylor University’s Truett Seminary and one half of the podcast Melanated Faith.