From papyrus in Montana to ivory in Jerusalem, these are the discoveries that made scholars of the biblical world say “wow” this year.
Gordon Govier|December 20, 2022
Image: AP Photo/Tsafrir Abayov

Biblical archaeology is a slow process. Not only does it take years to dig and sift the artifacts of biblical history, but it also takes years to analyze and interpret the discoveries. The most important things unearthed in 2022 will not be widely known for years. But the past 12 months have seen some amazing announcements of findings that expand our knowledge of the world of the Bible.

Here are 10 of the most important archaeological finds that made news this year:

10. A papyrus in Montana

A scrap of papyrus framed and hung on the wall of a home in Montana was identified as one of a handful of Hebrew texts older than the Dead Sea Scrolls. The text is a little larger than a postage stamp, with four short lines of ancient Hebrew, including the name Ishmael. The unnamed owner said his mother was given the papyrus when she visited Israel in 1965. Israeli authorities believe it dates to around 700 B.C.

The owner agreed to donate the historic object to the Israel Antiquities Authority, so that it can be properly preserved and studied. Experts do not know where the papyrus came from originally, but they do think it’s genuine. Radiocarbon tests matched the paleographic dating of the writing style. Ishmael was a common biblical name going back to the time of Abraham.

Rural life in Galilee came into sharper focus when work on a water project uncovered remains of a farmstead. The farm was abandoned for unknown reasons about a century and a half before Jesus’ lifetime. The workers left behind implements and equipment, including pieces of a loom and large storage vessels, giving scholars insight into the average day at the time the Hasmonean kingdom, during the Hellenistic period, was expanding north from Jerusalem.

The dig director called the discovery “a time capsule, frozen in time.”

An accidentally opened tomb south of Tel Aviv revealed treasures that had been sealed away for 3,300 years. A digging machine fell through the roof of the tomb of an unknown Canaanite. When archaeologists entered, they realized they were looking at a burial chamber dating to 1300 B.C. A video of the entry records them saying, “Wow, wow,” over and over.

Because the tomb was never disturbed and the items buried with the important person are still intact, archaeologists believe they will be able to learn a great deal from the excavation of the Palmahim Beach Tomb, which is now being planned. They immediately identified numerous pots from as far away as Cyprus, indicating a lively trading network around the time the Israelites were freed from slavery in Egypt, or perhaps 100–150 years after.

7. A monument to Hezekiah

Hezekiah is back in the news after the king of Judah’s name has been confirmed in an inscription excavated near Jerusalem’s Gihon Spring. Haifa University professor Gershon Galil has concluded that a piece of limestone, dug up in 2007, is the first known monumental inscription celebrating a great achievement in ancient Israel or Judea. These were very common in other ancient cultures but did not appear to exist in Israel or Judea. According to Galil, however, there is now evidence they did.

He has deciphered the partial text as saying, “Hezekiah made pools in Jerusalem,” which echoes the phrase in 2 Kings 20:20, “He made the pool and the tunnel by which he brought water into the city.” According to the biblical account, the pool was one of Hezekiah’s great works, created to defend Jerusalem against potential sieges.

A prayer to the apostle Peter adds evidence that el-Araj is the true location of the New Testament town of Bethsaida. A mosaic at a Byzantine church uncovered near the shore of the Sea of Galilee includes a petition to “the chief and commander of the heavenly apostles,” a phrase commonly used by Christians of that time to refer to Peter.

Archaeologists believe the inscription comes from the Church of the Apostles, which according to tradition was built at the historic home of Peter and Andrew. If so, that’s strong evidence that the site they’re excavating, el-Araj, is Bethsaida, the biblical hometown of Peter and Andrew. Some experts think another excavated site, nearby but farther from the Sea of Galilee shore, is Bethsaida.

Scholars have discovered a new way of dating the destruction left by military conquests, giving them another tool to use alongside carbon dating, ceramic chronology, and epigraphy. In a joint Tel Aviv University-Hebrew University study, more than 20 researchers from different countries and disciplines were able to accurately date 20 destruction layers by reconstructing the direction and/or intensity of the earth’s magnetic field left in the burnt remnants of 17 archaeological sites.

They were able to identify the destruction date of the Philistine city of Gath and several other cities by Hazael, king of Damascus, around 830 B.C. They subsequently discovered that the destruction of Beth-shean and two other sites in northern Israel, which had been associated with Hazael, actually occurred 70–100 years earlier, possibly at the hands of the Egyptian Pharaoh Shoshenq.

“I think that it’s going to become part of the toolbox of archaeologists here in Israel,” the lead researcher said.

Scholars have cracked the code of an ancient language and say they will now be able to decipher Linear Elamite. A team of academics used a bilingual inscription naming several ancient Mesopotamian rulers, written in Linear Elamite and Akkadian cuneiform 4,000 years ago, to figure out more than 90 percent of the Elamite symbols.

The writing system is believed to be a little younger than cuneiform, and about 40 known texts in Linear Elamite exist today, all found in what is now Iran. While cuneiform was deciphered in the 19th century, Linear Elamite had remained unreadable.

The Elamites are mentioned a few times in the Bible. They were conquered by Cyrus the Great and became part of the Persian empire. The story of Esther takes place in a Persian palace at the Elamite capital of Susa. “Elamites” are also mentioned in Acts 2, when the Holy Spirit empowered the apostles to proclaim the gospel in other tongues.

Ivory was more precious than gold in ancient times, but many tiny pieces have been found in the ongoing excavation of a parking lot just outside the Temple Mount area of Jerusalem. These fragments—discovered over a period of several years—are the first bits of ivory ever found in excavations of the city. Through careful cleaning and restoration, archaeologists have determined the ivory was used in furniture inlays, decorated with rosettes, flowers, and geometric patterns.

The ivory was found in the ruins of a large building that was devastated by fire, probably in the Babylonian destruction of Jerusalem in 586 B.C. It could have come from Solomon’s throne, which is described in 1 Kings 10:18, or the bed that the prophet Amos condemned in Amos 6:4.

Archaeologists missed a tiny lead tablet when they excavated a site on Mount Ebal 40 years ago, but it was found during the wet sifting process in the reexcavation of a dump pile. And folded inside the tablet was a message that scholars say they have been able to reveal with a CAT scan.

According to Scott Stripling, the head of the team from Associates for Biblical Research, the tablet has Hebrew writing that reads, “Cursed, cursed, cursed—cursed by the God YHW. You will be cursed. Cursed you will surely die. Cursed by YHW—cursed, cursed, cursed.” The two uses of the divine name and the chiastic structure are remarkable, and the text could also be the oldest existing example of Hebrew writing by several hundred years. The curse tablet appears to date from 1200 to 1400 B.C., which would link it roughly to the time that Joshua built an altar on Mount Ebal and pronounced a curse on those who turn from God and worship idols (Josh. 8:30).

The interpretation of the text and identification of the artifact is disputed. Images of the inscription have not yet been peer reviewed. 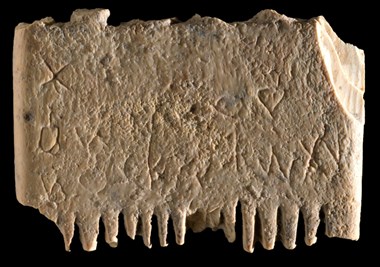 An inscription on a tiny ivory comb excavated at Tel Lachish in southern Israel tops our list for 2022. The comb was dug up in 2016 but it wasn’t until earlier this year that one of the excavation team members, Madeleine Mumcuoglu, noticed scratches that turned out to be words. She sent a photo to an epigrapher, who determined the marks not only were words, but they formed a complete sentence.

The inscription is Canaanite—the first alphabetic language—and it’s the earliest complete sentence that has been found written in the language. Based on the shape of the letters, it was written around 1700 B.C., about 100 years after alphabetic writing developed first developed. The comb had big teeth on one side and smaller teeth on the other side—an early example of the kind of lice comb that can still be purchased today. The sentence says, “May this tusk root out the lice of the hai[r and the] beard.”

Archaeologist Michael Hasel, who co-directed the excavation at Tel Lachish where one of his students found the comb, told CT that the discovery provides new evidence for the development of the alphabet.. “Prior to this time everything was written in either hieroglyphics in Egypt or in the cuneiform script by various languages in Mesopotamia,” he said, “so to have this complete sentence found at this early stage is quite remarkable."

Writing on a common object also suggests that literacy in 1700 B.C.—centuries before the time of Moses—was not uncommon in the biblical world. The Canaanite alphabet was used to write the first books of the Bible in Hebrew.

Gordon Govier writes about biblical archaeology for Christianity Today, hosts the archaeology radio program The Book & The Spade, and is the editor of Artifax.

CT’s Stories of 2022 That You May Have Missed