The Season’s Greeting Most Preferred for Happy Holidays? ‘Merry Christmas.’

Debates about acceptable holiday greetings occasionally roil American retail stores and cable news shows, but when it comes to cards, most people prefer “Merry Christmas.” According to an industry survey, Americans send about 1.6 billion Christmas cards every year, and 53 percent carry the traditional religious greeting. “Happy Holidays” ranks second in card choice, and the more generic “Season’s Greetings” comes fourth after “other.”

The Christmas card tradition has proved surprisingly durable. It dates back to the Victorian era, when the celebration of Christmas was transformed into a family-centered commercial holiday. Queen Victoria started sending Christmas cards in the 1880s. Calvin Coolidge sent the first one from the White House about 40 years later.

There were always some people who bah-humbugged the tradition. A newspaper columnist in 1897 called Christmas cards “a well-meaning nuisance” that got in the way of businessmen’s more serious correspondence. But most respectable middle- and upper-class households in the English-speaking world sent and received cards.

The tradition sagged a little in the 21st century with the rise of social media—especially Facebook—but then millennials revived the tradition as a way to add a personal connection to holiday celebrations. Card-sending households mail, on average, about 30 cards, and most people prefer pictures of kids and an old-fashioned “Merry Christmas.” 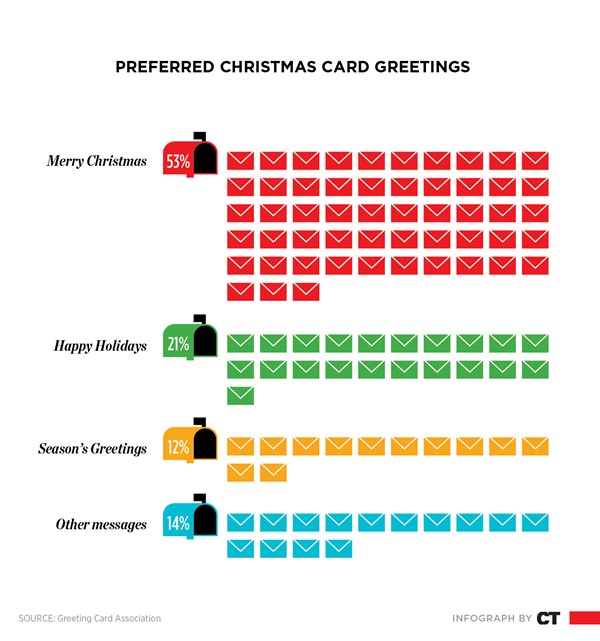 @Danielsilliman
This article is from the December 2022 issue.

The Season’s Greeting Most Preferred for Happy Holidays? ‘Merry Christmas.’

The Season’s Greeting Most Preferred for Happy ...