“While studying the Book of Hosea, I felt nudged to write another novel, but one that would show the difference between what the world considers love and the unconditional, sacrificial, all-consuming love of God,” Christian romance author Francine Rivers wrote for CT in 2016. “The result was Redeeming Love. The writing process kept me close to the Lord.”

The book was her first after becoming a Christian and was wildly successful among evangelical readership, selling more than three million copies. Along with a loyal fan base, it has garnered criticism for being a “gateway” to soft pornography for its steamier scenes and as an endorsement of unequal power dynamics between men and vulnerable women. Thirty years later, the historical romance has been brought to the screen with Rivers as executive producer.

The Gold Rush–era retelling of the Book of Hosea follows Angel (Abigail Cowen), a woman trapped in prostitution, and Michael (Tom Lewis), the man God calls to rescue her by marriage. Angel struggles to believe in Michael’s love or in his God, but slowly becomes convinced. But in the screenplay, Angel’s conversion experience mellows Rivers’ original distinction that the titular redeeming love is ultimately God’s, not Michael’s.

Dorothy Bennett talked with Rivers, who cowrote the screenplay with director D. J. Caruso, to discuss the film’s purpose in Christian culture today.

Well, that’s a good question. Thinking from Angel’s point of view, she’s sold into prostitution at the age of eight. For her, sex is degrading. It is disgusting, and it represents being captured and being in bondage. So when she meets Michael, she has no concept of love at all. He’s gently wooing her. And in the movie—and it might kind of raise the brows of some—he has married her, and he’s waited, and he’s wooed her, and he’s gently courted her, until he knows she loves him. Then he consummates the marriage.

We tend not to talk about sex, but the Song of Solomon is in the Bible. That was what I wanted reflected in this. It’s a gift from God when it’s in the right frame, within a marriage. And unfortunately, in our culture, it’s like anything goes. We’re seeing so many different things on TV that are explicit, shockingly so. I think there is a place for a tastefully done love scene to try to show the difference between what the world says love is and what God says it is.

Among other sex scenes, there is a scene in the brothel when Michael and Angel first meet, where the camera lingers on Angel. But there is only a short, comedic scene where Michael takes a dip in the river. There seems to be an inequality in how they are depicted on screen.

We’re not trying to titillate people. There’s a point to the scenes and a reason for them to be in there. And it’s such a gritty story. It’s coming from a hard place. I’m thinking about the letters that I’ve gotten and people talking about how it impacted them as survivors, coming out of that kind of life, and them wanting to know Michael. And I’m able to say, “Well, this is really about Christ and the way Christ loves you and how he defines you.” There’s the line in the movie where Michael’s saying, “You didn’t choose the life you had, but you can choose the life you want.” We all have to make that choice. And that’s the primary message in this too: the love of God and letting him make you a new creation.

There is a triangular relationship structure of Michael, Angel, and God in a marital relationship. Do you feel like that was adequately portrayed in the film?

I would hope so. That’s the primary thing we were trying to do, and we wanted to reach unsaved people. It’s a Universal Studios release. It’s going into theaters all across the country and in Canada, and hopefully it’ll reach people that don’t know anything about Jesus. We try to make sure that faith message is right there, from the beginning to the end, because he goes into that church and he’s asking God to give him somebody to share his life.

There were things that we had to leave out because you want the faith message to get through and not have people distracted. You want the passion of God to show. You want to uphold the sanctity of marriage and the beauty of sex within the marriage that’s the gift of God. But it’s been a journey, and we’ve tried to be very careful and do it in a very tasteful way.

When Angel leaves Michael for the final time, she begins to experience God on a personal level. Because we didn’t have that audible voice of God like in the book, there may be confusion about it being God’s redeeming love that brings her back (versus Michael’s).

In some of the earlier scripts, [the writers/producers] wanted Michael to go after [Angel] and save her at the end. The point of the story is God’s heart. God wants our hearts, our souls, and he’s the ultimate decision we have to make. 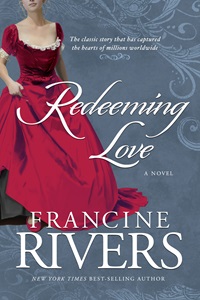 You write in the romance genre, which follows a narrative arc between two people. In Redeeming Love, you break the mold in the sense that you introduce Angel to a wider community, including female friends. Why was that important for you to include?

Oh, I think it’s very necessary, and that’s what we’re supposed to be in the church. We’re supposed to come around and help people and come alongside them. Galatians 6:1–2—walk alongside people that are struggling and share your own victory in Christ. Michael’s also got that community around him. They are mirroring Christ’s love in front of Angel. And it takes. Sometimes it takes more than one. You don’t know how many seeds are planted in a person’s life before they ever really understand that God is chasing them and trying to bring them home to him, where they belong.

Even though some elements of the story are sensational, you seem to be attempting to depict something realistic.

Yes. It is a gritty story, and the thing that I feel is a blessing out of it is people that are survivors connect with the story and it gives them a sense of hope. They can watch this, and they can realize, God loves me and there is a plan for my life,and I don’t have to live in my past. My past does not have to define my future. We all have to make a choice. So for me, it was about my coming to Christ and looking to other things. But then for other people who have been through tremendous trauma, that means something different. Holly Caruso, [director] D. J. Caruso's wife, and I created a foundation for sex trafficking survivors. That's something that has come out of the proceeds of the movie.

Is the bottom line of the movie about choosing a relationship with God more than choosing a pleasant life with Michael on the farm?

Absolutely. I want people to walk out of the movie hopeful. I really hope that Christians will use it. That they can bring unsaved friends and say, “Let’s watch this movie together, and then let’s talk about faith issues.” And really, fiction is always meant to go back to the real thing. It’s meant to draw people to Christ. The movie is meant to bring people to Christ, and it’s to offer a tool for us to share our faith with people who don’t know Jesus at all.