The first Chinese converts in the US were drawn to a gospel of equality.
Timothy Tseng|May 11, 2022
简体中文繁體中文
Image: Library of Congress / WikiMedia Commons
A corner crowd in Chinatown, San Francisco, between 1896 and 1906.

Chinese Protestant Christianity was born in the crucible of Chinese interaction with European and American missionaries in the 19th century. This was an era marked by the expansion of British and American commercial and military power. After the Opium Wars (1839–1842 and 1856–1860), Great Britain successfully pried open China to the West and to Protestant missionaries. Before the United States acquired Hawaii and the Philippines, it was engaged in territorial expansion in North America. This territorial expansion was accompanied by rapid economic development that created a tremendous demand for labor. The abolition of slavery in the British territories (1807) and the United States (1863) only intensified the need for cheap labor globally.

These historical developments explain, in part, the growth of the Chinese diaspora and Chinese immigration to the United States and Canada. A small but significant presence in the Spanish, Portuguese, and Dutch colonies in the 16th through 18th centuries in Asia, the Chinese diaspora grew rapidly during British expansion. Chinese labor was crucial for the growth of the North American West. Much of California‘s agricultural industry as well as US and Canadian railroads were built by Chinese contract workers from Guangzhou.

What about the Christians? Most were delighted that the British and American powers had pried China open for the spread of the evangelical faith and cultural uplift. Abolitionists, who fought to eradicate slavery and trafficking, saw new opportunities to share the gospel of liberty and equality globally.

In the 1850s, when Chinese immigrants started to come to the United States in significant numbers, the Western Protestant missionary presence in China was limited to Hong Kong and five treaty ports. American mission societies saw an opportunity to build a transpacific Chinese Christian network that could reap the benefits of American Christianity. But even before the first Chinese church in North America (today’s Presbyterian Church in Chinatown, San Francisco) was started in 1853 by four Chinese Christian merchants, obstacles arose that would decisively shape the character of Chinese American Christianity.

First, Chinese immigrants almost immediately faced hostility. Like European immigrants, the first Chinese immigrants were adventure seekers who saw an opportunity to become rich through mining or commerce shortly after the news of gold strikes in California in 1849 spread to China. But in 1852, the state of California passed discriminatory taxes and later attempted to force Chinese out of the mines and stop Chinese immigration. 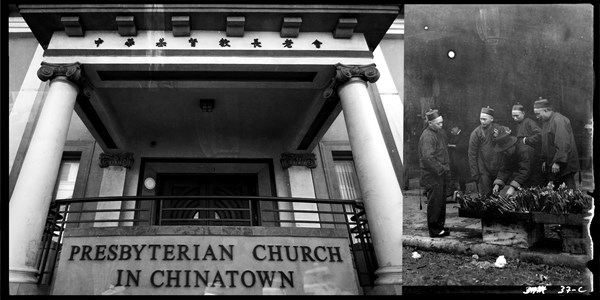 Left: Presbyterian Church in Chinatown, San Francisco, started in 1853 by four Chinese Christian merchants. Right: A lily vendor in Chinatown between 1896 and 1906.

Protests from the Chinese associations (including a self-described naturalized citizen and Christian merchant, Norman Asing) could not stem the growing animosity. Even the advocacy of missionaries and mission agencies could do little to prevent the US (and later, the Canadian) government from passing discriminatory immigration and naturalization laws in the late 19th and early 20th centuries.

Second, the transient, geographically scattered, and male-dominant Chinese immigrants made it nearly impossible to form stable faith communities. This was especially true during the 1850s and 1860s when most Chinese worked in mines scattered across the American West. As the mines dried up, many settled in adjacent small towns. Some started shoe - and cigar-making companies; others entered domestic service.

The construction of the Central Pacific Railroad in the 1860s brought a new wave of contract laborers. Many later worked on railroad construction in Canada, the American South, and the Northeast. A number of white congregations reached out to their new Chinese neighbors through language schools; however, they could not retain them because of cultural-linguistic barriers and Chinese work transience. An attempt to plant a Chinese Baptist church in Sacramento in 1854 was quickly abandoned. Even the Presbyterian mission in San Francisco, the only free standing Chinese Christian church in North America at the time, became inactive by 1860.

In the 1870s, however, a series of events gave birth to North American Chinese Christianity. As the Chinese population nearly doubled to 63,000 by 1870 and approached 105,000 by 1880, animus toward the Chinese intensified. They were blamed for the 1870s economic downturn in the West. Lacking the legal protection that comes with citizenship, Chinese were driven out of mining towns and many were killed. As they fled into Chinatown enclaves, they created segregated urban slums. Fueled by the backlash against Reconstruction in the South, the anti-Chinese movement quickly grew into a national movement leading to the passage of the Chinese exclusion acts of 1882, 1892, and 1902.

During this time, American missionary agencies renewed their efforts to build up and support the Chinese Christian community. Beginning in 1868, Methodist, Congregationalist, Baptist, and Episcopalian missionaries and Chinese pastors were assigned to San Francisco’s Chinatown. Before long, women missionaries accompanied them and established English language schools, community centers, and women’s rescue homes.

A number of white missionaries gained notoriety for their fearless advocacy of the rights of the Chinese. William Speer (1822–1904) not only helped plant the Chinese Presbyterian mission in San Francisco, but he also left important testimony in the California state records defending the Chinese in the face of racial prejudice. His successors, Augustus W. Loomis (1816–1891), Ira M. Condit (1833–1915), and Donaldina Cameron (1869–1968) have all left important legacies as supporters of the Chinese in North America. Otis Gibson (1825–1889), an unflinching ally who started the Chinese Methodist work, set the tone for Protestant advocacy for racial justice. Congregationalist William C. Pond (1830–1925) was supported by the abolitionist American Missionary Association. He and the Chinese Congregationalist pastors were among the most passionate preachers of the gospel of human equality. Together, these missionaries and Chinese Christian leaders provided stability for the community and channeled denominational attention and support.

The first Chinese converts were clearly drawn to the egalitarianism of an abolitionist-inspired evangelicalism. In a speech at an anniversary celebration of the Methodist Chinese Mission in San Francisco in 1875, Ma See connected the Christian view of a Creator God and Chinese rights: “If this world was created by the one universal God; if it belongs to God; if men are all created equal; if all men come from one family; if these things be so, and they are so, then the Chinese, of course have the same right to come to this land and to occupy the land, that the people of any other nation have.”

They also distinguished between what they perceived to be authentic and false Christianity. In the North American Review (1887), Yan Phou Lee noted that when “the Chinese were persecuted some years ago—when they were ruthlessly smoked out and murdered—I was intelligent enough to know that Christians had no hand in those outrages; for the only ones who exposed their lives to protect them were Christians.”

While white missionaries have been rightly accused of racial paternalism, they were among the few who protested anti-Asian violence and fought exclusionary and discriminatory legislation, albeit unsuccessfully. They modeled a postmillennial zeal that made public witness an indelible mark of Christian faithfulness. Despite their unequal collaboration with missionaries, Chinese Christians embraced a spirituality that wedded personal connectedness to God with social and political engagement. Together they built a Christian transnational network that envisioned racial uplift and national salvation.

Timothy Tseng is the Pacific area director for InterVarsity Christian Fellowship’s Graduate and Faculty Ministries (GFM) and coexecutive director of New College Berkeley. He has served as a seminary professor, nonprofit founder, and pastor. His PhD dissertation was titled “Ministry at Arms’ Length: Asian Americans in the Racial Ideology of American Mainline Protestantism, 1882–1952.”

Left: Presbyterian Church in Chinatown, San Francisco, started in 1853 by four Chinese Christian merchants. Right: A lily vendor in Chinatown between 1896 and 1906.