Between 1927 and 1949, millions of Christian posters appeared on the streets of China.

These posters challenged, co-opted, and subverted political messages in circulation and daringly portrayed an alternative vision of national salvation.

Chinese Christian artists used familiar techniques and symbols to proclaim that the kingdoms of this world, whether Nationalist or Communist, would fade before the kingdom of Christ.

From clocks and masks to roads and floods, Christians deployed common propaganda symbols of their day to point people toward Jesus Christ, China’s only true hope for salvation.

The Chinese Nationalists bulldozed their way to power in 1927, rumbling north to Beijing behind a phalanx of pamphleteers. Their leader, Chiang Kai-shek, and his lieutenants preferred posters and handbills over bullets and bombs. They placarded the country with posters of the Nationalists liberating China from calamity and exploitation. The Nationalist Party wanted to win the heart of the nation, not merely browbeat it into submission.

J. Sidney Helps, the general secretary of the Religious Tract Society for China (RTS), a major producer of Christian literature and evangelistic tracts, watched in amazement as the revolution was achieved “using our means and improving upon them.”

Propaganda established the new masters of the Middle Kingdom, he concluded. Could not Christians use the same tactics to inaugurate the kingdom of God?

“Do propaganda work for [your] Lord and Master,” Helps challenged fellow believers that same year.

Millions of Protestant propaganda posters entered the Chinese market. Copied onto the cheapest paper and plastered on walls using starch and brooms, the large (109 cm x 76 cm), brightly colored posters briefly attracted attention before they dissolved in the rain or were covered by a more current notice.

These “silent preachers” filled the busy streets of China’s cities and appeared in tearooms and on temple gates throughout the countryside.

During Chiang Kai-shek’s push to power in 1927, the National Christian Council of China (NCC) created propaganda posters and sent them to roughly one-third of all Protestant congregations in China that fell under its umbrella. 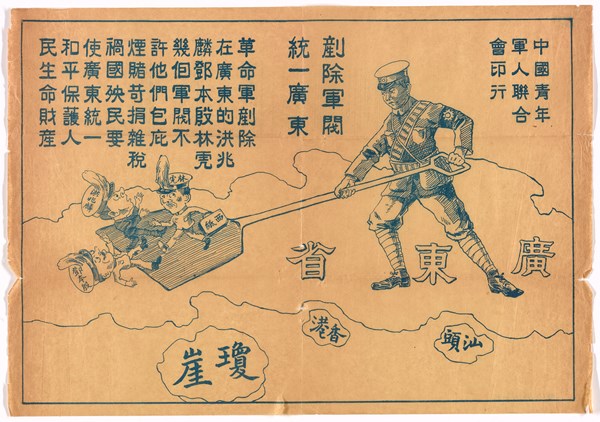 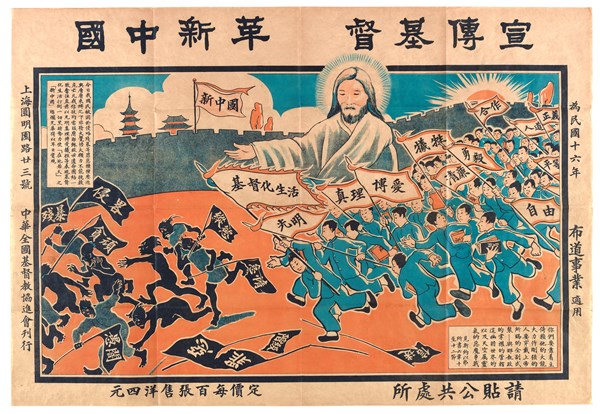 Arriving in bundles of 100 prints, the Christian posters mounted their own campaign for the hearts and minds of the people. These posters were not for use in Sunday school or designed to decorate a sanctuary. The bottom of each poster provided very clear instructions: “Please hang in a public place.”

The NCC posters modified the Nationalist Party’s imagery so it was no longer the Nationalist Army that was rooting out evil and corruption but Jesus and his troop of modern evangelists.

Christ, not Chiang, is the one who frees China from foreign aggression, ignorance, class differences, and superstition.

Behold, now is the day of salvation

Other Christian posters in China expressed a deep sense of urgency. 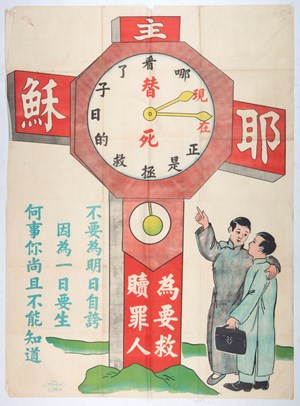 China had been carved up by imperial powers. For 70 years, every effort to resist had failed. To keep trying the same things—the same old political solutions, military strategies, or economic adjustments—or even adhering to the same old religious beliefs or following the same moral rules was tantamount to surrender.

To many in China, the track record was obvious: If China did not change, then there would be no China at all.

“Decision Time,” a poster with a clock superimposed over a cross, honed that message. Not only was the wording on the clock clear—“Now is the day of salvation”—but its imagery was also jolting.

Clocks are associated with death in China, and this poster struck a particularly time-sensitive note: Unless change happens immediately, the end is here.

Chinese Christian posters were attention grabbing and worked to persuade viewers of their own moral and spiritual crisis. But they also communicated that more was at stake than personal salvation.

In subtle yet clear ways, these posters referred to China’s desperate situation. At first glance, the poster “Sin the Enemy of Man” appeared to address an individual’s rather standard vices—alcohol, opium, prostitution, and gambling. 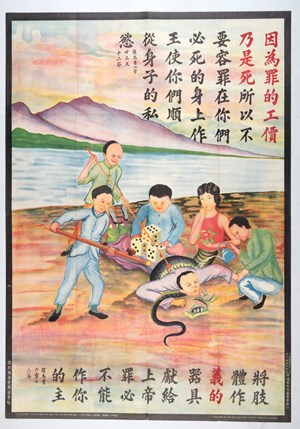 Chow Chih Chen, “Sin the Enemy of Man,” 1936. Published by the Religious Tract Society of Hankow (and Shanghai).

However, the poster’s audience at the time would have recognized the man ensnared by these sins not just as an individual susceptible to sinning but as a metaphor for China.

At the back, wearing a green shirt and holding a spear to the neck of the poor man, is a masked figure. Beginning in the 1920s, images inspired by Marxist-Leninist teachings circulated in China depicting such masked men. (The Nationalists weren’t the only political movement that believed in the power of posters.) They always conveyed a clear message: Westerners, especially missionaries, could present themselves as “civilized” men and women, but they were “monsters” in reality.

Western missionaries were particularly sinister, so this Marxist-Leninist propaganda went, because their treachery was hidden behind high-minded ideals. What appeared to be an offer of assistance to China through education, agricultural modernization, and medicine was in fact a ploy, nothing more than a cover for cultural imperialism and economic exploitation.

According to Communist propaganda, then, national salvation began by recognizing the reality of foreign aggression hidden behind the mask and expelling such “evil” forces from the country.

Chow Chih Chen, the Religious Tract Society artist who composed “Sin the Enemy of Man,” responded to this notion by making his poster a parable of China’s present condition. 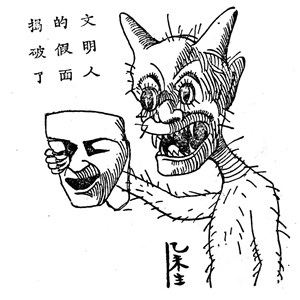 Chow used the iconographic clue of a masked man to help viewers realize that his poster was not simply about an individual’s moral shortcomings. In his drawing, the entire nation was chained and ensnared by what many would assume to be harmless leisure activities and various kinds of amusements. In its epicurean reverie, China had rendered itself incapable of resisting the foreign powers that held a deadly spear to its neck.

This poster sent both a biblical and geopolitical message to the country: “The wages of sin is death.”

For those who had eyes to see, national salvation did not lie in modernization, Communist revolution, or the Nationalists’ military strength.

Something deeper must transpire, because China had become a helpless captive, easy prey for foreign powers to eliminate. The nation must turn to Jesus now, for he alone could break the bonds that enslaved the nation, the poster urged. 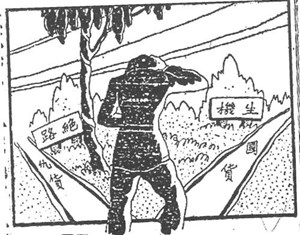 This was a common visual tool used by political activists in the 1920s and 1930s to simplify a person’s choices. Cartoons, like this one that appeared in the newspaper Shenbao, put people at a crossroads.

To the left is a road marked “enemy products” with a sign explaining that buying imports—even if they were cheaper—was the straightest path to China’s collapse. To the right is a road named “national products,” with a sign pointing toward “national survival.”

Everything hinged on a person’s choice. Which way to go?

Christian posters only slightly modified the scene. Seldom were people precisely at the crossroads. Rather, they tended to have mindlessly wandered past the fork in the road, continuing in their selfsame direction. If they did not become alert to the signs around them, the results would be catastrophic, these posters cautioned.

“Look, You Blind!” shows a Buddhist monk, a farmer, and a scholar (a cross-section of China itself) following the “wrong road.” They are a half step away from going over a cliff and about to plummet to “eternal death,” as the sign warns. 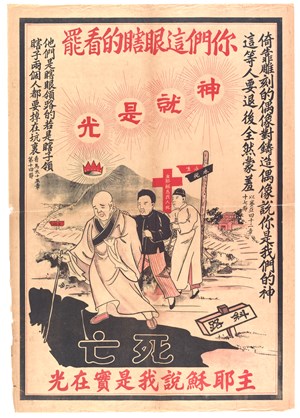 Yet even at this last moment it may not be too late. If people would just heed the signs, things could turn out much differently. An alternative path exists—an ascending road that leads to an eternal reward. Those looking for salvation just need to pivot, and a crown of glory will be theirs.

Many Christian posters also warned that China and its people were on the verge of disaster, their feet dangling on the edge of the Abyss.

But other posters went further. They conveyed how the people of China had passed a critical moment and did not need to make a choice. Rather, they needed to be rescued.

In the 1920s, a drought pushed 20–30 million Chinese people toward starvation and claimed the lives of 500,000. A decade later, floods displaced 52 million people while the waters swallowed two million lives.

In between those catastrophic events, China endured almost a dozen civil wars, withered under crippling economic sanctions, was stripped by the worldwide Great Depression, and watched helplessly as Japan annexed Manchuria.

China, in the heyday of Christian poster propaganda, was a nation teetering on the brink of an abyss. 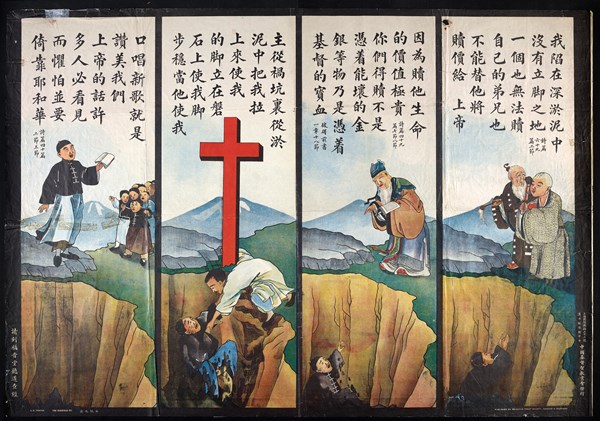 “The Horrible Pit,” unknown artist, 1929. Published by the Religious Tract Society of Hankow (and Shanghai).

No wonder viewers felt that they needed something to hang on to.

Time and again, Christian propaganda posters provided that sense of hope and assurance concretely. The cross of Jesus became the one firm anchor or life raft in an otherwise dangerous and destructive world. Its auspicious red color promised viewers not only a new beginning but also a blessing. Their ill fortunes and the collapse of China could be reversed if they would just cling to the cross.

Whether the solutions to China’s many crises at the beginning of the 20th century were easy to solve or not, Christian posters allow us to view what Chinese Christians believed about their faith and how they tried to make it attractive to their compatriots. 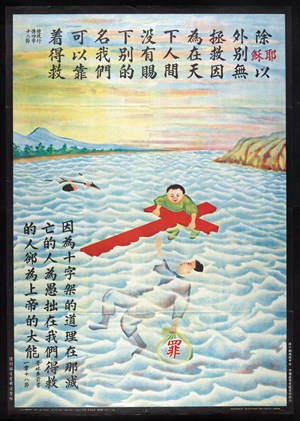 Chow Chih Chen, “The Life Saver,” 1936. Published by the Religious Tract Society of Hankow (and Shanghai).

In the hundreds of posters collected at ccposters.com, one can see how Chinese Christians crafted their own message of national salvation in the face of Nationalist and Communist propaganda. Protestants believed Christ could transform China, and they depicted his marvelous acts of salvation in a variety of ways.

It is no wonder, therefore, that when the Communists rose to power in 1949, almost all these Christian posters were destroyed. Surviving posters, carried out by missionaries and refugees, are now being tracked down by the Center for Global Christianity and Mission at Boston University, and they reveal some of the creative ways Christians in China vied for the soul of their nation.

Daryl Ireland is research assistant professor of mission at Boston University School of Theology and editor of the forthcoming book Visions of Salvation: Chinese Christian Posters in an Age of Revolution.

A previous version of this piece was published on ChinaSource.