“You must change your thinking,” Brother Andrew told me when we first met.

He was responding to my “rockstar” reaction as I finally encountered one of my heroes, at a lunch buffet in South Asia in 2000. Like a super-fan, I had blurted out, “I never thought I would meet you.” His response was swift, on point, and left me pondering.

That was the man: simple, straight-forward, and leaving a large impression. Dressed in a T-shirt and shorts, Brother Andrew listened intently as I recounted my story of how his life had inspired my own journey into Christian ministry.

It was the first of many meetings I was privileged to have with him over the following 15 years. Each committed to my journal and fresh in my memory, even as I process the news that this mighty man of God has gone to be with his maker whom he loved and served, never wavering from the call to “strengthen what remains and is about to die” (Rev. 3:2).

Brother Andrew was called by God as a young man to go into closed countries and to minister to the church where it was oppressed and lacked resources—especially Bibles. I remember hearing from him that anyone could do what he did, because the power of God was the same. He often said that God has called us to go with his gospel, and that all doors are open to the good news of Jesus Christ. He enshrined this in the name of the organization he founded: Open Doors.

What began as a Scripture distribution agency has now transformed into a massive international organization also involved in training, socioeconomic development, research, and advocacy across 60 nations. But its focus continues to be the persecuted Church.

I remember Brother Andrew asking us if there was any region where the gospel is not allowed. “I will tell you how to get there,” he said. “You may not come back, but you will get in. God asked us to go, and did not say ‘Go and come back.’”

Brother Andrew believed in going because he believed in presence. At the beginning of his ministry in Warsaw, he preached at a local Baptist church. He recounted that the pastor later told him that his being there was worth more than the best sermons. “If being there is the answer,” he said, “then anyone can do what I did.”

May we never lose focus of this: that more than money and other resources, what the persecuted church needs most is presence and solidarity. It is comparatively easier to give money than presence, and both are important; but presence can make the difference between life and death. Today, when persecution is on the rise globally and in India, this is a lesson the church must remember. 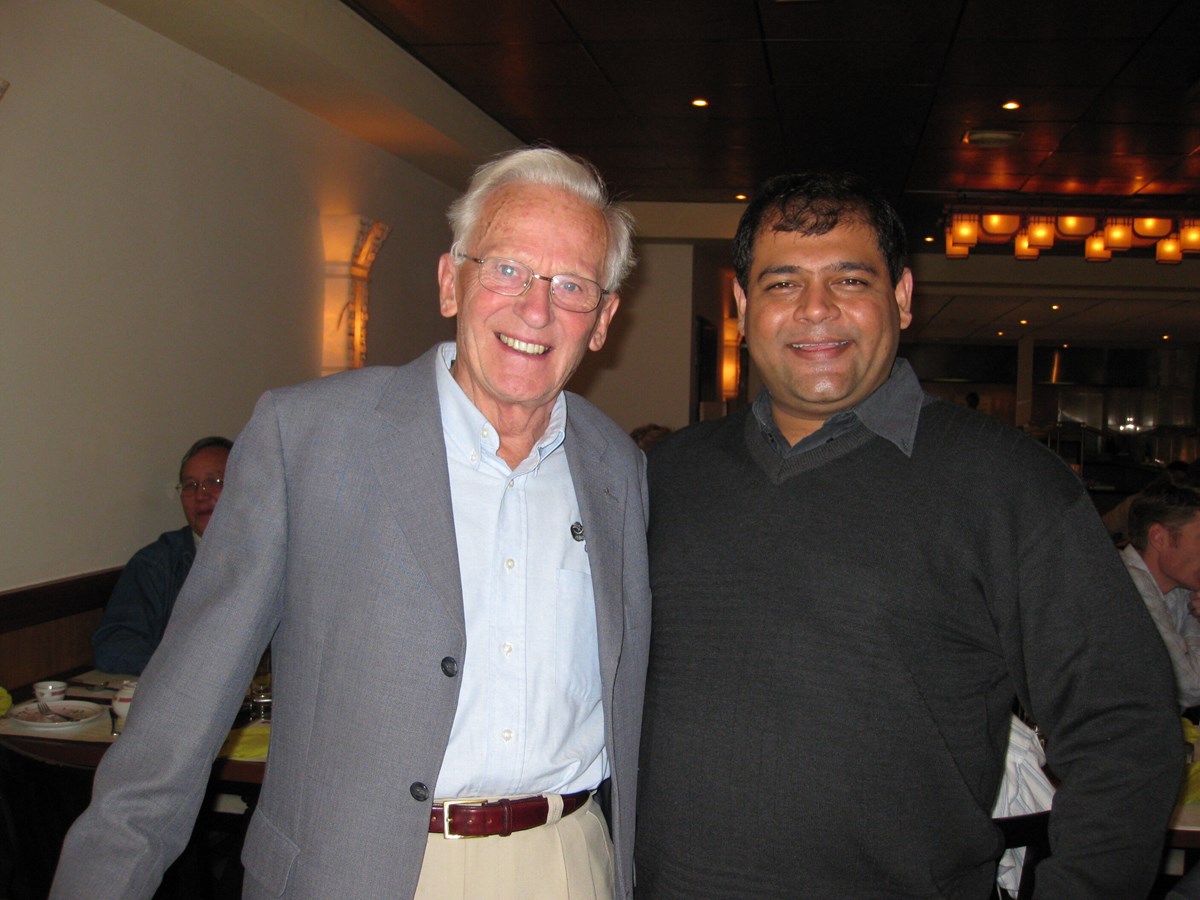 When Brother Andrew spoke, one was astounded by the radical faith he had. It was infectious. He was not the most talented preacher that I have heard, but he has always been one of the most effective. God used his words to pierce my heart on many occasions. I remember when a member of our group asked him what would he do if he lived his life all over again. He promptly said, “I would be more radical.”

After all, this is what Mahatma Gandhi advised E. Stanley Jones when the American Methodist missionary told the Indian independence leader, “I am very anxious to see Christianity naturalized in India, so that it shall be no longer a foreign thing identified with a foreign people and a foreign government, but a part of the national life of India and contributing its power to India’s uplift and redemption. What would you suggest that we do to make that possible?”

This was also Brother Andrew’s message: a life fully committed to Jesus and lived for him. He also saw no enemies, just people who needed the love and touch of Christ. “Beware of the enemy image,” he once told us. “Because you can never preach the gospel to your enemy. That is mutually exclusive. He is not your enemy; Christ died for him. How can he be your enemy.”

Brother Andrew often said that he was not “anti-anything” but was “pro-Jesus.” He also had a remarkable acronym for Islam that I greatly appreciated and spoke of his heart: ISLAM—“I sincerely love all Muslims.”

Much to the chagrin of many, Brother Andrew openly said that Osama bin Laden was on his prayer list. It was not a popular opinion, especially in the Western world. But he believed that one man with God is a majority.

If we do not go with the gospel, we will find that they will come to us with guns, Brother Andrew often said. “There is no fighting Jesus and there is no fight for Jesus. There is fellowship in Jesus.”

How I wish that the global church and the church in India catches this vision: that there are no enemies, but that Christ died for everyone—making them worthy of love and grace and a place at the table.

People like Brother Andrew and Mother Teresa see the reflection of Christ in everyone. The testimony of Mother Teresa was so impactful because her service was motivated out of love and compassion and out of a reverence for the image of God in every human. No wonder when she delivered a powerful statement valuing the life of the unborn in the presence of US President Bill Clinton and Vice President Al Gore—who did not share her beliefs on that subject—that Clinton, who spoke immediately after her, began by saying, “It’s hard to argue with a life so well lived!”

People in the world today are looking for what is real, for what is genuine, and they know an authentic life when they see one. Both Mother Teresa and Brother Andrew were the real deal because their convictions arose from love and were based on the lordship of Jesus Christ. The early church out-loved the people around them and that is what drew many to Christ. May we never lose focus of this.

I first learned about Brother Andrew after discovering his book, God’s Smuggler, in my father’s library. I had just come to faith a few weeks prior when God used another book—Peace with God, by Billy Graham—to answer my questions about life and the Christian faith. God’s Smuggler was the second book I read, and I was fascinated by the adventures of this ordinary Dutchman and his faithfulness and obedience to God.

I was a teenager, and I started making plans to go to the Worldwide Evangelization Crusade in Scotland, as Andrew had done, so that I could join him after in his mission to the persecuted Church. I had no idea how to go about it, and counselors including my pastor soon talked me out of it, charging me to first complete my education.

Many years later—still struggling with the question of whether to step into Christian service or not—when I finally surrendered myself to God’s will, I had no idea he would lead me on a path where in a few months I would be sitting across from Brother Andrew as a fellow coworker in ministry to the persecuted body of Christ.

At one of our first one-on-one sessions, I remember asking Brother Andrew about financial insecurity in ministry and how he had faced challenges on that front. It used to be a major worry for me. Here I was, an inexperienced young man starting in ministry, and there he was, a legend, and I am amazed that he took time to not only speak to me and counsel me but also shared his own experience to address my concerns.

He counseled me to trust God for my provision and that God will take care of the ones he calls. But he also narrated his own life experience, when his wife asked him if the needs of the family were not met, what would he do? He had answered, “I would go back to the factory.” But he encouraged me by letting me know that he never had to do so; God had always provided.

As someone who delivered the precious Word of God to the church that needed it the most, Brother Andrew understood the importance of reading and studying the Bible as well as other books that can educate and disciple the believer. “Go through the Word of God and let the Word of God go through you,” he would tell us. He used to say that every Open Doors base should have a modest library where people can read and learn about ministry and topics in general.

Brother Andrew was very well read and informed. That is what perhaps helped him to focus on areas where many were oblivious. From the Iron Curtain to the “bamboo curtain” of China, from the Communist context to the context of the Muslim world, he always sought to carry Jesus and his gospel to people in need. He believed in the ministry being “lean and mean” and was not afraid to explore new frontiers or to have views that were less popular.

As I look back today, I am thankful to God for Brother Andrew and his life. For his simplicity and his matter-of-fact attitude, but most of all for his example in his obedience to Christ that allowed him to impact millions.

When he was once asked what he would like his epitaph to be, Brother Andrew answered, “He did what he couldn’t.”

Vijayesh Lal is general secretary of the Evangelical Fellowship of India.