The Good Samaritan shows up in the Gospels as an apparent exception to his people, since he’s the “good” one. Then he exits the stage, presumably to go back to life with the rest of the Samaritans, with little explanation of what a “Samaritan” is or why that might have mattered to Jesus and his first followers.

A new exhibit at the Museum of the Bible in Washington, DC, opening on September 15, promises to expand our understanding of these biblical people. CT spoke to Steven Fine, a Jewish scholar at Yeshiva University, about the history of the Samaritans, their relationship to Jews and Christians, and how they can help us better understand the Bible.

If a regular churchgoer knows one thing about Samaritans, they know there was one good one. When Jesus tells that story, why does it matter that the Samaritan is a Samaritan?

What Jesus does in the story is miscast the part. The Samaritan should have been stereotypical bad guy in the first century, and here he is, he stops to help.

The story takes place in a horrible dry place in the Judean desert. It’s very uninviting. The priest has a reason for not stopping. Then the Levite, who helps in the temple, walks by and doesn’t help. You would expect the next stage of the story to be an Israelite. But it doesn’t go that way. It’s the Samaritan.

He’s the guy who is least likely to do the right thing, in the popular imagination. But he stops to help! That’s completely unexpected. That breaks the story. That’s why it’s such an interesting story.

Now I got to tell you, in Jewish literature not too long after, there is a rapprochement between Jews and Samaritans.

How do they come together? What does that look like?

After the destruction of the temple in A.D. 70, we find Samaritans moving into Jewish regions, and in the texts you find things like rabbis saying, Oh yeah, you can eat Samaritan matzah for Passover. No problem.

When we get to more recent history, it’s the British and American Protestants and then the Zionist movement that saved Samaritans from destruction in the 19th and 20th century. Providing food. Providing political support. Real practical help.

A lot of people don’t know that the Samaritans are still around, that there’s a contemporary community. How many are there and where are they?

There are more than 800 of them today. About half of them live in Nablus, in the West Bank near Mount Gerizim, and half live in a Tel Aviv suburb.

American Protestants and early Zionist leaders saw them as Israelites who never left the land. They embraced them and supported them, and there’s been this conscious interest from people of goodwill to get them the resources they need to stay alive.

In the 1840s, they were almost completely wiped out when Muslim authorities said, Well you’re not Jews, which we tolerate as “people of the book,” but you’re not Muslim, so you have to convert or be killed. They had been destroyed in Damascus and they weren’t doing well in Cairo, and this was sort of the Alamo for these people. This was the last stand. The Samaritans in Nablus went to the British consulate for help, and the consulate influenced the chief rabbi of Jerusalem to write essentially a letter of recommendation—They are Israelites who believe in the Torah of Moses. That was enough to save them.

In 1900 there were 119 or something. Now there are enough Samaritans to fill two 747 airplanes.

You’re a Jewish scholar at a Jewish university. CT is an evangelical magazine, and I don’t know that we have any Samaritan readers. Why should Jews and Christians be interested in this pretty obscure group of people?

To back up a little bit, can you give me a brief history of the Samaritans?

Let me give you two different timelines. The Samaritan timeline is that Moses took the children of Israel out of Egypt and Joshua crossed the river and went to Mount Gerizim. So far so good, right? The tabernacle was set up on the top of Mount Gerizim and life was good. They consider it a period of blessings.

Now the Samaritans have the Torah, but besides that they have oral traditions—they don’t have the prophets and the histories.

Everything went well until the priest Eli decided to abscond with the tabernacle and go to Shiloh, and then David did the ultimate abomination of going to Jerusalem. Solomon built a temple there, and from the Samaritan point of view, those people left the true religion behind.

Now the Jewish timeline is that everyone was together and the northern tribes went bad and the southern stayed good and there was a split, which continues to this day. That’s the one we know from the Bible.

After the Assyrian exile, there’s also all these non-Israelites who are brought in and they intermarry with the Samaritans, and for the Jews, that lowers their status.

How much of the division should we think of as theological—a dispute over the proper place to worship—and how much of it is division over ethnic purity and who is married to whom?

No, no, that’s too Protestant. This is Judaism! You can’t differentiate the two. You hear what I’m saying? That’s where this issue lives.

There has been 2,000 years of literature—whether it’s the woman at the well asking Jesus, What are you doing here? or in rabbinic literature, the rabbis walking through Nabulus and Samaritans saying, Why are you going to Jerusalem? The holy mountain is right here! This is a long conversation.

Was that encounter common, where someone is walking by the Samaritans on the way to Jerusalem and gets these questions, like when the woman at the well asks Jesus about worshiping on the mountain versus in the temple?

Yes! Remember, all these people were walking to Jerusalem. It was the only way to get there. So for the Samaritans, all these Jews are walking by their mountain and they’re like, Are you out of your mind? You’re going to walk another day and a half? We have the mountain. And by the way, folks, we have the water.

In the rabbinic literature, there are all these stories about Samaritans heckling people going to worship in Jerusalem. It’s all on that same road that Jesus was walking.

What did worship at Mount Gerizim look like at the time Jesus was asking that woman for water?

Well, the problem is, there was no Samaritan Josephus. Remember, we wouldn’t know much about first-century Jerusalem if it wasn’t for Josephus, writing stuff down, trying to explain things to the Romans. And there wasn’t a Samaritan doing the same thing for Mount Gerizim.

But my guess is it’s pretty close to worship in Jerusalem. There’s pilgrimage to the holy site and when they get there, there’s a sacrifice, and they’re reading Torah scrolls together. 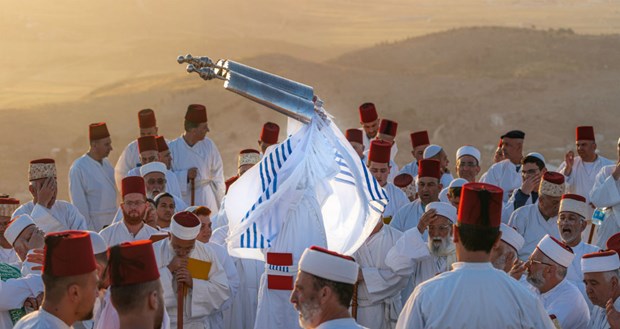 Image: Museum of the Bible

After the destruction of the temple in Jerusalem, the Jews are exiled, so that’s how we end up with a diaspora. What happened to the Samaritans?

The Samaritans had a horrible situation under Rome. When it would have helped them to be seen as Jews, they weren’t. When it didn’t help, they were. They weren’t part of the revolt, but they got implicated in that, and Pontus Pilate killed a bunch of them. But when Jews had an exemption that said they didn’t have to sacrifice to the emperor, Samaritans didn’t, so they were punished if they didn’t assimilate to the Roman state religion.

Occasionally the situation is so horrible that the Jews help them. And other times it’s divide and conquer, and the Romans or other rulers pit them against each other. All the time, in all the literature on both sides, you see them working out this relationship: We’re the same. No, we’re different. No, we’re all children of Israel. Yes, but you’re wrong.

Let me give you an example. In the 16th century, this rabbi in Constantinople gets a question: We got a Samaritan Torah curtain. Somebody came to town and said we couldn’t use it. Can we use it? So what does this rabbi do? He does what rabbis do and thinks it through, right-side up to upside down, to show that Samaritans are not idolaters, and if they’re not idolaters, then they can use it. At the end of the text he says, They’re not idolators. They have images of doves on this curtain but they’re not praying to doves. It’s fine. But you know what, don’t use it!

Add the Samaritans to the story, and it complicates things! That’s why it’s so interesting.

What will people see in this exhibit at the Museum of the Bible?

Another part of the exhibition is what Jews, Christians, and Muslims have said and done with the Samaritans. There’s that version of the story and the history of the interpretation of the Samaritans and the political questions about their existence.

It will open the evening of September 15, and you can see it through the end of the year. Then it goes to Bibel Haus in Frankfurt, Germany, from March through July. After that I’m hoping we can package it for smaller venues, Jewish community centers and Christian colleges, and maybe it can come to where you are! I hope everyone gets a chance to see it.

Correction: The Museum of the Bible exhibit will run through January 1, 2023.