Miroslav Volf tells how to stop the 'shield of memory' from turning into a sword.
Interview by Collin Hansen|May 18, 2007
Bookmark
Ask Not What Your God Can Do for You

Rather, love God for who he is, says John Piper.
Reviewed by Collin Hansen|February 01, 2006
Influence Peddling, Extortion, or Both?

Pastor says HealthSouth founder Richard Scrushy paid for support. Scrushy denies account.
Compiled by Collin Hansen|January 20, 2006
Christian History Corner
Now That You've Got Political Power, What Are You Going to Do with It?

History offers warning and hope for our modern-day Christian populism.
by Collin Hansen|November 01, 2004
Theology in the News
No Place for Complacency

David Wells on The Courage to Be Protestant.
Interview by Collin Hansen|May 16, 2008
Interview
Q & A: John Thune

CT spoke with Bock, Dallas Theological Seminary research professor of New Testament and author of the forthcoming The Missing Gospels (Nelson), about the stir caused by the Gospel of Judas release in early April.
Interview by Collin Hansen|June 01, 2006
REVIEW
The Elusive Middle

High-profile cases underscore stakes for next nominee.
by Sheryl Henderson Blunt and Collin Hansen|October 27, 2005
Not All Evangelicals Voted for Bush. That's News?

The controversy at Calvin looked nothing like it played in the media.
by Collin Hansen|May 27, 2005
Interview
Pope Gave Evangelicals the Moral Impetus We Didn't Have

Timothy George discusses how "the greatest pope since the Reformation" changed evangelicalism without us knowing.
Interview by Collin Hansen|April 06, 2005
Interview
How Then Shall We Politick?

Michael Gerson, recently resigned Bush speechwriter and adviser, on how evangelicals should comport themselves in the public square.
Interview by Collin Hansen|August 01, 2006
Interview
Scripture and The Wall Street Journal

David Miller wants us to think more deeply about integrating faith and work.
Interview by Collin Hansen|November 14, 2007
Essays
The Holy and the Ivy

Intellectual skepticism persists in the Ivy League. Thankfully, so does a vibrant Christian faith.
by Collin Hansen|September 01, 2005
Bush Commissions Calvin Grads to Serve

The Message of the New Testament shows how Jesus carries out the Old Testament.
Reviewed by Collin Hansen|April 01, 2006
Theology in the News
God Is Love

Robert Yarbrough comments on the plainspoken Beloved Disciple.
Interview by Collin Hansen|September 22, 2008
Christian History Corner
Should We Fight for Under God? 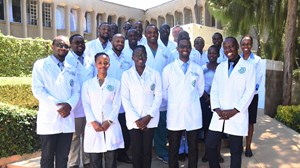 News
The New Face of Medical Missions
The missionary physicians of the 21st century will be Africans—and US missions agencies couldn’t be happier.