Plus: Buddhists burn another church in Sri Lanka, some conservative Christians are nonplussed by Bush's marriage initiative, and other stories from online sources around the world.
Compiled by Ted Olsen|January 01, 2004
Weblog
Suspect Nabbed in Pakistan Car Bombing

Plus: Links to a record-breaking 429 religion stories on gay marriage in Massachusetts, San Francisco, and the Church of England, a Ten Commandments resurgence, The Passion of The Christ, and even a few topics Weblog hasn't beat to death already.
Compiled by Ted Olsen|February 01, 2004
Weblog
Bush Endorses Federal Marriage Amendment 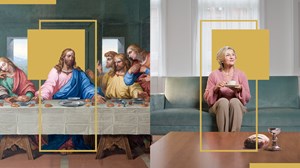 Last Supper
What Matters Is That We Remember
Jesus’ last Passover was our first Communion.