1 – 20 of 25 ARTICLES
page:12Next >
The Exchange
Evangelical Views of the 2016 Election: "There are No 'Must' Candidates!" -Darrell Bock
Professor of New Testament Studies articulates the dilemma many Christians face in this election cycle
Darrell L. Bock|September 30, 2016
The Good News of Da Vinci

How a ludicrous book can become an opportunity to engage the culture.
By Darrell Bock|January 01, 2004
When the Media Became a Nuisance

How to respond to the next blockbuster book/documentary/movie that questions traditional Christianity.
Darrell Bock|December 12, 2007
Seeing Light After the Smoky Darkness of the Trade Towers Collapse

The spiritual war against terrorism is the war against the sinful heart and its allegiances
Darrell L. Bock|September 01, 2002
Book Briefs
BOOKS: Probing the Passion

Darrell Bock|October 03, 1994
The Jesus and Judas Papers: A Look at Recent Claims about Jesus

Questions about history may be sincere, but make no mistake: There is an agenda at work.
Darrell Bock|April 13, 2006
Good Question
Dribbling Circles Around Jesus

What did Jesus mean when he said that we would do greater things than he did?—Tyler Willian, Los Angeles, California
Answered by Darrell Bock|June 01, 2006
When Sin Reigns

An event like this shows us what humans are capable of becoming—both as children of darkness and of light
Darrell L. Bock|September 01, 2001
Entertainment
'Jesus and Paul': Looking at a Journalistic Approach to Christianity's Beginnings

A full review of ABC's Jesus and Paul: The Word and the Witness
Darrell L. Bock|April 01, 2004
No More Hollow Jesus

Darrell L. Bock|September 12, 1994
Christ's Confident Resolve
What Jesus' arrest and trial can teach us about facing opposition.
Darrell L. Bock|April 18, 2019
Essays
The Politics of the People of God

The Church has a unique role to play in our politicized culture.
by Darrell Bock|September 07, 2005
My Top 5
My Top 5 Books on the Historical Jesus

Picks from Darrell Bock, editor of 'Key Events in the Life of the Historical Jesus.'
Darrell Bock|December 03, 2010
CT Forum
Scandal?

We would be deluding ourselves if we thought that evangelical thinking in our day has progressed very far.
conversation with Mark Noll, Alister McGrath, Richard Mouw, Darrell Bock; moderated by Michael Maudlin|August 01, 1995
Interview
Peter Jennings Goes Back to the Bible

The ABC news anchor talks about Monday's three-hour special, Jesus and Paul: The Word and the Witness.
Interview by Darrell Bock|March 01, 2004
Scandal? (continued from previous article) 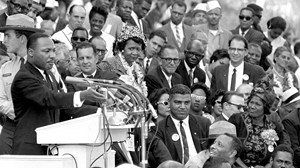 Editorial
On MLK Day, Be Still and Listen
Hearing each other is a miracle. We need to practice receiving it as such.
Current Issue
January/February 2020Subscribe
Read This Issue
Follow @ctmagazine
CT Bookstore
View All
Free Newsletters
More Newsletters