The actor who plays Billy Graham in a new movie has the utmost respect for the evangelist, but loved getting to know Graham's lesser-known personal side too.
by Peter T. Chattaway |October 07, 2008
Entertainment
Sex Symbol and Christ Follower

The animated Ten Commandments didn't draw much of a crowd to the cineplex, but the company behind the movie is optimistic about its future Bible films.
by Peter T. Chattaway |February 12, 2008
Entertainment
Shorts

The latest kids' flick from Robert Rodriguez is silly, chaotic and illogical, but in a way that makes it seem all the more childlike.
Peter T. Chattaway|August 21, 2009
Anglicans: Maverick Vancouver diocese approves same-sex blessings

Cory Edwards, director of the surprise hit Hoodwinked, knows how to make a good movie with limited resources. He's also a Christian … but don't look for a blatant evangelistic message in his flicks.
by Peter T. Chattaway |May 02, 2006
Entertainment
From Temptation to The Code

Christian critics weigh in on The Messengers, Because I Said So, Factory Girl, Jonestown: The Life and Death of Peoples Temple, and more.
Peter T. Chattaway|October 29, 2009
Entertainment
The Final Cut 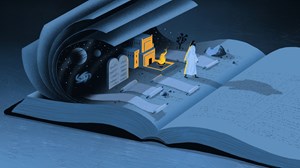 The First Testament
We Need to Read the Bible Jesus Read
The Old Testament is vital for understanding the New Testament. It’s also indispensable all by itself.