Without a mature understanding of God’s purpose for governments, we’ll default to the commonplace views of our culture.
Jonathan Leeman|February 17, 2020
Interview
Proving That God Exists Without Opening a Bible

How human reason alone can lay a pathway from doubt to belief.
Interview by Lydia McGrew|June 21, 2019
Book Review
What Humans Have That Machines Don’t
How a theology of personhood cuts against the mechanical metaphors we use to describe ourselves.
Christopher Benson|January 16, 2019
Book Review
Myers-Briggs and Other Mirrors for the Soul
A new history of the ubiquitous personality test sheds light on what it can and can’t deliver.
Erin Straza|September 14, 2018
Theology
Keeping the Trinity Personal
Defending the oneness of God shouldn't nullify the Bible's claims about the mutual love of Father, Son, and Spirit.
Peter J. Leithart|June 22, 2018
An Evangelical's Guide to the Enneagram

And what difference does it make?
By Bob Smietana|July 01, 2004
Interview
Unwanted Interruptions

Why is our culture so hostile to children-inside and outside the womb?
An interview with theological ethicist Amy Laura Hall|July 01, 2004
Another Small Step for Life

Plus: Former Archbishop of Canterbury criticizes Islam, The Passion of The Christ opens overseas, and other stories from online sources around the world.
Compiled by Ted Olsen|March 01, 2004
Weblog
'The United States of America Is Building a Culture of Life'

Plus: Converting to 'evangelism,' bioethics council on reproductive technologies, Pope says feeding tubes a moral obligation, and other stories
Compiled by Ted Olsen|March 01, 2004
Cover Story
The Techno Sapiens Are Coming

When God fashioned man and woman, he called his creation very good. Transhumanists say that, by manipulating our bodies with microscopic tools, we can do better. Are we ready for the great debate?
By C. Christopher Hook|January 01, 2004
Interview
Define 'Better'

One person's improvement is another person's degeneration.
An interview with bioethicist C. Ben Mitchell|January 01, 2004
1 – 14 of 14 ARTICLES
page:1 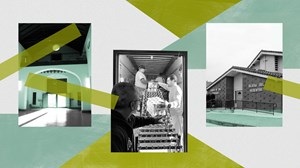