Home > 2014 > December
December 04, 2014|DiscipleshipDerwin L Gray
We All Have a Little Egypt in Us
Trusting God in difficult circumstances. 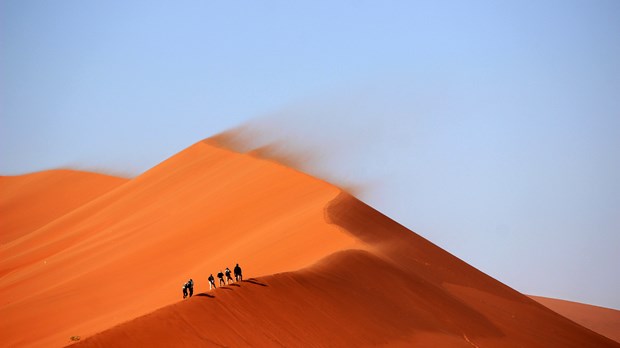 I love the Exodus story. It has mystery, adventure, heroism, defiance, miracles, and the struggle of real people in a world swirling with volatility and danger. So often, I, and perhaps you, read the Bible like it’s a sterile textbook, instead of as God’s redemptive activity on planet earth with people in the midst of real life, struggling with faith and doubt.

As I read Exodus, I get frustrated with the children of Israel. I think, “Are you kidding? The God of Abraham, Isaac, and Jacob kicked Pharaoh’s butt! He performed ten miracles of epic proportions to set you free from the yoke of slavery. God even parted the Red Sea and drowned the Egyptians as they pursued you. How can you turn your back on him?”

But in the midst of my frustration, I remember that I have a little Egypt in me, too. Exodus 16:1–3 says,

When I say that I have a little Egypt in me, too, this is what I mean: Before Jesus set me free, or redeemed me through his sinless life, death, resurrection, and ascension from the Egypt called sin, death, and evil, I had ways of thinking and acting that allowed me superficially to get my needs met through sinning. The Bible calls this walking in the flesh (See Gal. 5:16–24). Just as the children of Israel longed for Egyptian meat pots and bread, we will long for the former things of life in Egypt when the heat of the desert sunburns our hearts with fears and doubts.

Why did the children of Israel complain?

Just like you and me, the children of Israel forgot that their redemption was not just for them; it was a part of a bigger story. God preached the gospel beforehand to Abraham by making a covenant with him to bless all the families of the earth through him (Gen. 12:1–3; Gal. 3:8–9). Israel’s freedom was not about its comfort, but its character development to be God’s missionary people to the Gentiles living in darkness (See Ex. 19:5-6).

Just like you and me, the children of Israel forgot that their redemption was not just for them; it was a part of a bigger story.

2. They forgot the reason why God set them free.

3. They forgot to trust God in the midst of difficult circumstances.

In the desert heat, the children of Israel’s faith wilted, just as hard circumstances can wilt our faith. They longed for the meat and bread of the Egyptians. In the midst of life’s trials, we, too, can long for the familiar even though it keeps us in bondage. In the midst of their unbelief and rebellion, God said to Moses, “I have heard the grumbling of the Israelites. Tell them, ‘At twilight you will eat meat, and in the morning you will be filled with bread. Then you will know that I am the LORD your God’” (Ex. 16:12).

We all have a little Egypt in us. Let’s thank God that he has an infinite amount of grace to lavish on us.

We All Have a Little Egypt in Us

How Can We Have Hope When Everything Looks Hopeless?How to Hold On When Everything Is Coming Apart Walking Through the Valley of the Shadow of DeathWe Are a People of Hope

We All Have a Little Egypt in Us