Home > 2014 > November
November 24, 2014|ChurchDerwin L Gray
#Ferguson and the Cross
Live as an ambassador to a hurting world. 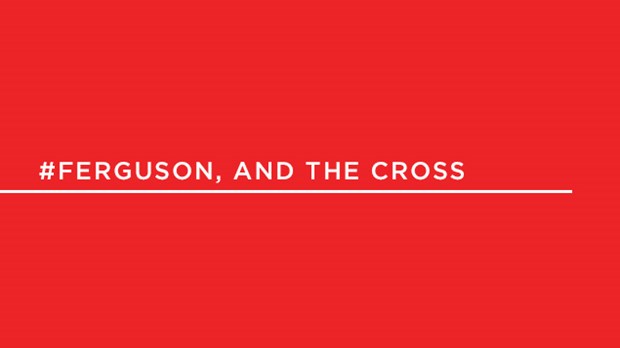 In the months since the shooting, the world has watched closely to see how America faces its racial issues. We may wish we lived in a post-white/post-black world, but recent events affirm that we do not.

While we may never know all the details of what went down in Ferguson, we do know that black Christians and white Christians interpret these types of situations very differently. According to a recent CNN poll, “Fifty-four percent of nonwhites––including blacks, Latinos and Asians––say Wilson should be charged with murder, while just 23 percent of whites agree.”

So inside the church and outside the church, it appears that black people (and other minorities) and white people see events like the tragedy in Ferguson from totally different perspectives.

As a pastor of an intentionally multiethnic, multiclass church, I believe Jesus’ church can bring healing to the deep wounds in our country by being a testimony of how the cross and blood of Jesus can bring about reconciliation and justice.

What if black and white Christians, as well as other minorities, were members of multiethnic churches instead of segregated ones? Nearly 90 percent of churches in America are homogenous, meaning one ethnic group makes up more than 80 percent of the church. Sometimes geographic demographics cause this, but often it is a choice we make to remain segregated as Christians. For example, churches are 10 times more segregated than the neighborhoods they are in and 20 times more segregated than the schools that are near them.

If we worshiped side-by-side in the body of Christ, could we address racism, oppression, and injustice together? We could move towards being one (John 17:21, 23).

If we worshiped side-by-side in the body of Christ, could we address racism, oppression, and injustice together?

In the first century, the churches the apostle Paul planted had their own version of ethnic strife. In Christ, former enemies became co-worshipers in the same multiethnic local churches.

What if black and white Christians shared life with each other in a local church community and heard each other’s stories and walked in each other’s shoes?

“For Christ Himself has brought peace to us. He united Jews and Gentiles into one people when, in His own body on the cross, he broke down the wall of hostility that separated us. He did this by ending the system of law with its commandments and regulations. He made peace between Jews and Gentiles by creating in Himself one new people from the two groups. Together as one body, Christ reconciled both groups to God by means of His death on the cross, and our hostility toward each other was put to death” (Eph. 2:14–16, NLT).

This reconciliation is not just for first-century Jews and Gentiles. It is for all humanity. The reason the church is segregated is that we don’t believe deeply enough in the power of the cross. It seems to me that Christians seem to not really believe that the cross of Christ has anything to do with racism and injustice.

But the gospel-reality is that “Christ reconciled both groups to God by means of His death on the cross, and our hostility toward each other was put to death” (Eph. 2:16, NLT)

Do you wake in the morning with a sense of urgency every day? I hope you do. As the firestorm in Ferguson reveals, the stakes are high. Listen to Romans 5:10–11, ESV,

“For if while we were enemies we were reconciled to God by the death of his Son, much more, now that we are reconciled, shall we be saved by his life. More than that, we also rejoice in God through our Lord Jesus Christ, through whom we have now received reconciliation.”

Outside of association and allegiance to Jesus, humanity is an enemy of God. This is why ambassadors of Jesus wake knowing deeply that our time, talents, and treasure are to be leveraged so that God’s enemies can be reconciled to him through Jesus. Reconciliation means that through Jesus, enemies of God become friends of God. It also means that in Christ we are unified into one body, a new man (Eph. 2:15).

When you signed up to follow Jesus, he gave you the ministry of reconciliation. Your life is a bridge over which people walk from death to life.

“All this is from God, who through Christ reconciled us to himself and gave us the ministry of reconciliation; that is, in Christ God was reconciling the world to himself, not counting their trespasses against them, and entrusting to us the message of reconciliation. Therefore, we are ambassadors for Christ, God making his appeal through us” (2 Cor. 5:18–21, ESV).

God has entrusted you and me, his church, with the message of reconciliation. Are you giving that message away? God pleads with people to become his friends through our lives.

Are we only sharing that message with people who look like us or have the same socioeconomic status we do?

Are we only sharing that message with people who look like us or have the same socioeconomic status we do?

There is a hurting world that needs to know Jesus became what God hates most––sin––so that they could become what he loves most––his children. When we sit in segregated churches we loudly proclaim that we love some of his children more than we love others.

For all eternity, followers of Jesus will enjoy Jesus and each other. But we will not share the message of reconciliation. There will be no need to. But there is a need today! That’s why Jesus left us here as his ambassadors to announce that the kingdom of God has come and that salvation belongs to our God.

So are we just going to scream “Racism” and “Injustice” from behind our segregated church walls, or are we going to start building multiethnic communities that embody what God’s desire is for the world to be

I’m thankful for the courageous local churches in Ferguson who are calling for peace and reconciliation.

Church, this is a pivotal time in history. Will we rise to the occasion?

#Ferguson and the Cross

How Can We Have Hope When Everything Looks Hopeless?How to Hold On When Everything Is Coming Apart All Good Things Must Come to an EndSo What Does It Mean to Love Your Neighbor?

#Ferguson and the Cross