I've been writing a bit about the value of cooperation lately, including an entry on about denominations. I believe in cooperation and want to encourage it on many levels. As I have said before, I think we can accomplish more together than we can apart. The Cooperative Program of the Southern Baptist Convention is a great case in point. The CP is a means of Southern Baptist churches pooling their monetary resources to continue the mission of the church including different kinds of international and North American church planting, theological education, mercy ministries and more. Whereas one church can only do so much in any one of these areas, together SBC churches accomplish great things in all of them.

Lifeway Research conducted a survey of pastors to examine Southern Baptist "churches' thoughts, feelings, and perceptions about the Cooperative Program."

Here are some of the interesting finds: 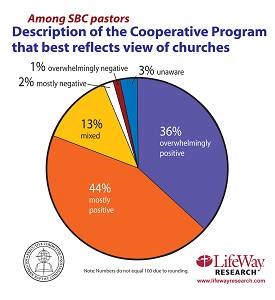 The description chosen by the most pastors (44 percent) was "mostly positive" stating, "We believe the CP perhaps could be improved in some ways, but is doing a very good job at present of supporting worldwide missions."

The second largest group of pastors (36 percent) describes the Cooperative Program as "overwhelmingly positive," stating, "we believe the CP is not only satisfactory, but is essential to the continued existence of the SBC, and the fulfillment of its mission of worldwide evangelism." 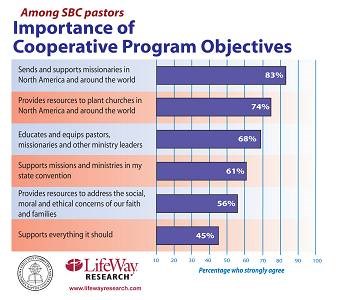 When most Southern Baptists think about the CP they think: missions and church planting. Though the CP funds many different ministries, these are widely considered to be the most critical work of the Convention.

Pastors feel strongly that the most important objectives of the CP are to send and support missionaries (83 percent) and to provide resources to plant churches (74 percent) in North America and around the world.

As I explained in the story, "Since many churches equate 'missions' with the Cooperative Program, we should not be surprised that 'missionaries' are at the top of the agenda for pastors."

While most SBC pastors have a high view of the CP, most also believe there is room for improvement. 65 percent of the pastors surveyed "strongly agree it is important for SBC entities supported by the Cooperative Program to use the contributions efficiently, only half that number (34 percent) strongly agree efficiency is present today." 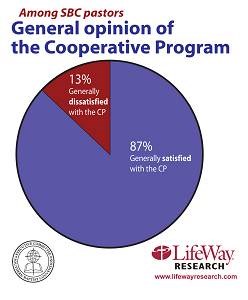 The CP is a strong example of cooperation that most of our pastors value. There is also a number that would like to see improvement in the efficiency of the CP and the precise way monies are allocated, "more than two-thirds of pastors strongly agree that the CP currently 'supports SBC entities, ministries, and missions that my church values.'"

I have already received many comments about the research. That is good, but I would like to ask you to share them here, publicly. I will encourage some denominational leaders to read your thoughts. So, let me here from you.

What do you think about the research, the Cooperative Program, and how we can make cooperation more effective?