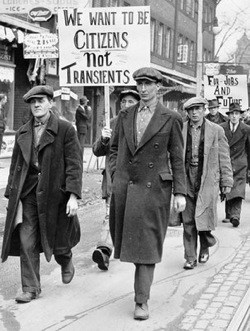 Gallup just released data that is has, as of today, not done so.

Despite some news reports to the contrary, a review of almost 300,000 interviews conducted by Gallup so far in 2008 shows no evidence that church attendance in America has been increasing late this year as a result of bad economic times. In September, October, November, and so far in December, about 42% of Americans reported that they attended church weekly or almost every week, exactly the same as the percentage who reported attending earlier in the year.

Their whole report, written by the ever-articulate David Newport, is here.

The New York Times says they do. Their headline "Bad Times Draw Bigger Crowds to Churches" explains their view. The Times explains:

But since September, pastors nationwide say they have seen such a burst of new interest that they find themselves contending with powerful conflicting emotions -- deep empathy and quiet excitement -- as they re-encounter an old piece of religious lore:

The Times cites a study by David Beckwith.

A study last year may lend some credence to the legend. In "Praying for Recession: The Business Cycle and Protestant Religiosity in the United States," David Beckworth, an assistant professor of economics at Texas State University, looked at long-established trend lines showing the growth of evangelical congregations and the decline of mainline churches and found a more telling detail: During each recession cycle between 1968 and 2004, the rate of growth in evangelical churches jumped by 50 percent. By comparison, mainline Protestant churches continued their decline during recessions, though a bit more slowly.

I read the study a few weeks ago and thought it was well crafted.

The Times does not tell you where to find it, but let me help... it is right here.

Here is the key:

The findings of this paper suggest there is a countercyclical component to church growth for Protestant denominations, particularly for evangelical Protestants.

Or, put more simply, when the economy goes down, evangelical attendance goes up (with a smaller shift among mainline churches).

What are you thoughts? Have you observed the "crush" that The Times mentions in their full article?