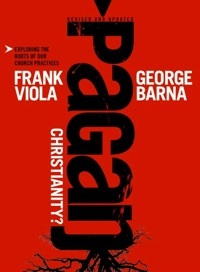 One of my favorite troublemakers is Frank Viola. When George Barna "entered" house church world (through his writings, at least), one of my comments was that he had not actually connected with any of the people in house church world. In other words, Barna was saying all the things house church people say, but not providing any solutions or awareness of the house church movement. And, I found Revolution to be a relatively unhelpful book for that reason (and several other theological reasons I have stated elsewhere).

In the follow-up book, Barna seems to have jumped whole hog into the house church world with none other than Frank Viola. Together they published Pagan Christianity which riled a lot of people up (me included) and not just because of the not-so-subtle title. For what it is worth, I think New Testament scholar Ben Witherington did a great job in his series on the book (starting here) and Frank was gracious in his response.

I like Frank. Sure, there are some areas we differ, but I like people with passion. He just sent me a copy of his new unpublished manuscript for his next book. So far it is really good and no mention of how just about everything I do in church is pagan (grin). Frank and I have been emailing a bit and it got me thinking about some research I did a couple of years ago to see if there really was a big movement of house churches out there.

You see, I am pro-house church (largely because I believe God uses all kinds of churches). I want house churches to "work." But, if you listen to some house church people, it sounds like there are movements everywhere in the states. And, I was pretty excited about them... but I could not find them. So many leaders say, "no, not a movement here yet, but check with Denver" (or Long Beach, or San Antonio, or Rhode Island). Anyway, you get the point.

I believe that God can and does use house churches, but the over-statement of their prevalence and effectiveness does not help. People like Frank know there is an uphill battle here, but I think an important one. And, I see people like Neil Cole and others working hard to advocate and demonstrate house chuch effectiveness. And, if and when it does break through, it could bring a huge change.

But, when Revolution came out (along with some spectacular headlines) we wanted to do some research and find out just want was going on... and here is the article we published a couple of years ago at the Center for Mission Research.

The Rise of House Churches and Alternative Faith Communities

from the Center for Missional Research

The "revolution" has recently become big news-- many committed believers are rethinking (or leaving) the established church for alternative forms of church and/or community. The term, "revolution," popularized by George Barna in the book by the same name, describes many trends, but the main focus is on the move to non-traditional expressions of church (marketplace faith communities, house church, arts, etc.).

Rabbi Gellman (who has some positive things to say about evangelicals in general), wrote about the move away from traditional, organized church in Newsweek as one of the top religious trends for 2006. (His excellent article is here.) Though this trend has not yet been noticed by many in the evangelical church, it is growing in prominence and reputation.

Millions of people are seeking God without going through a local church. This controversial movement of people seeking to "be the Church instead of just going to church"...

In 2000, most of the nation's organized religious activity took place at or through local churches. Today, Barna's research points out, the action is shifting to newer forms of corporate religious commitment. In a typical week, 9% of all adults participate in a house church. An even greater proportion--22%--engages in spiritual encounters that take place in the marketplace (e.g., with groups of people while they are at their place of work or play, or in other typical daily contexts).

In one chart, he describes the transition to a Christianity that is less connected to a local established church:

Put simply, there is a significant group of men and women leaving the established / institutional church but holding to a form of Christian devotion. According to some, this has led to a dramatic increase in alternative faith communities, which in turn has led to some major theological and ecclesiological concerns. Although this is not the focus of our polling research, see here, here, and my own here for theological responses to Barna's book and the trend.

Who Are These Revolutionaries and How Many Are There?

This house-church trend has attracted the attention of even the secular media. Time magazine recently featured an article on the subject, NBC news did a television segment, (Since ecclesiology--the theology of church--has become such a big issue among our churches, we, at the North American Mission Board, have created helps that explain what a church is through some ecclesiological guidelines.) These issues will continue to grow in prominence, forcing us to evaluate what a biblical church is. And we can and must evaluate in the light of scripture, not just in the history of our history, tradition, and, for that matter, polling data.

What about the Numbers?

The numbers have made quite a splash--one headline declared "1 in 5 American Attend a House church." At the Center for Missional Research (CMR), we wanted to go deeper to help inform our churches about what this trend means for them. Over the last several months, we commissioned Zogby International to survey more than 3,600 people (1200 interviews on three occasions) about several issues, but particularly about their involvement in spirituality and alternative expressions of church.

It should be challenging, exciting, and concerning that one out of four Americans consider their small or house group / church / synagogue / mosque to be their primary source of spiritual training. However, most of those who consider their small community to be their primary place of spiritual encouragement still attend church at a significant rate. Only a smaller percentage of those who attend a small spiritual community do not also attend church--but that is still a large number: 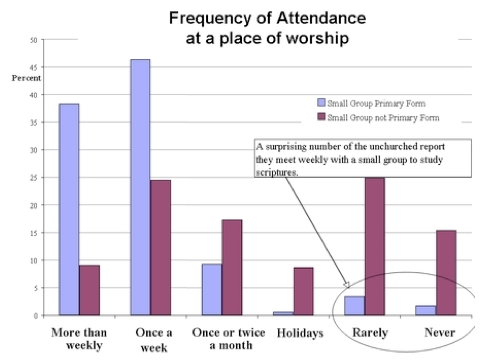 When we cross-tabulated the "small group" question with the "church attendance" question, we found that 50 out of 3,600 adults attend both a group of 20 or less and "rarely" or "never" attend a place of worship. If extrapolated, this is almost 1.4 percent of the American population and may represent the purest measure of those who are not involved in an organized church, synagogue, or mosque but still are involved in some alternative faith community like, in the Christian faith, a house church. That is about four million people--not a small number. Barna's people have estimated that a million Americans are involved in the "house church," or the Christian expression of the above trend.

This trend toward home based faith expressions may also explain the significant number of people who identify themselves as "spiritual but not religious." According to an earlier CMR/Zogby poll, 22% of people consider themselves "spiritual but not religious," particularly those who rarely or never attend church. The less frequently they attend church, the more likely they are to consider themselves spiritual, but not in a religious way. The chart below illustrates: 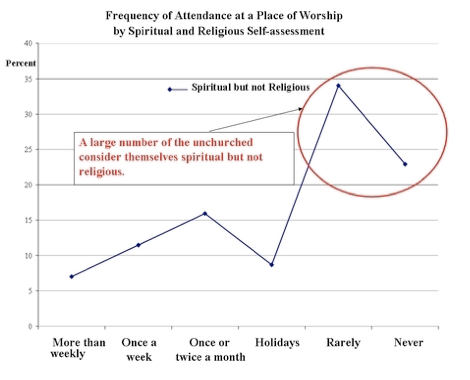 What Can We Learn?

While we don't celebrate the revolution if it means people leaving biblical churches, we need to recognize it is happening and ask "why?" A few years ago we were upset that so many from our churches were turning from us to Islam or Mormonism. Now things are different. They have not been recruited to another faith, many have been repelled by the practice of ours.

We need to look more deeply into the Word so we can lead our churches to be more biblical--with biblical covenant community, biblical leadership, biblical church discipline, biblical preaching, and other biblical, foundational characteristics. It does not matter if a biblical church meets in a cathedral or a coffee shop. That's not the point. But it must be a church because God has chosen the church to make known His wisdom (Eph. 3:10).

New biblical forms need to be welcomed and affirmed, particularly those that evidence more of the true community that many are finding in alternative faith communities. We need to bless all forms of scripturally-sound churches. Why? Because the church is essential. The church is not the center of God's plan-- Christ is. But the church is central to the plan of Christ for His name and fame to be more widely known.