The Barna Group released the findings of a new study that showed "congregational size is related to the nature of a congregation's religious beliefs, religious behavior and demographic profile."

Specifically the study showed "statistically significant differences between churches of 100 or fewer adult attenders and churches of 1000 or more adult attenders." In fact, the only issue covered where no real difference existed was whether the person had prayed during the previous week. Here is some of the information from the article at Barna.org.

On all 9 of the belief statements tested, attenders of large churches were more likely than those engaged in a small or mid-sized congregation to give an orthodox biblical response - e.g., the Bible is totally accurate in all the principles it teaches, Satan is not merely symbolic but exists, Jesus led a sinless life, God is the all-knowing, all-powerful creator of the world who still rules the universe, etc. 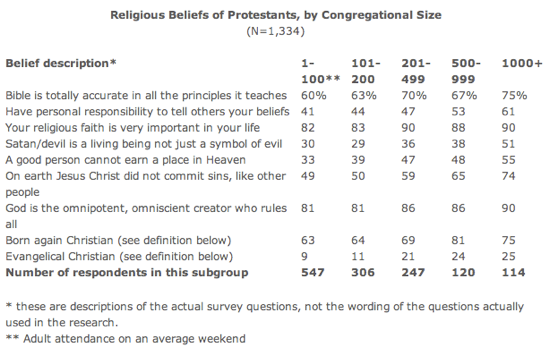 Another interesting point was that House Churches were not following the trend of other small congregations.

So head over to the Barna Group, read the report and come back here to discuss.

Join the conversation on Facebook
Tags:
None
Posted:
August 27, 2009