A new study coming out of Lifeway Research shows that "Protestant pastors in America are working long hours, sometimes at the expense of relationships with church members, prospects, family and even the Lord." The uber-fast folks at The Christian Post has already reported on the story.

You can read the whole article here in Facts & Trends, our flagship publication at LifeWay. Speaking of Facts & Trends, I will be joining the team there as a contributing editor starting in the next issue. Each issue will include a column from Thom Rainer and me, in addition to new research.

Here are some of the numbers. See the article for the full story. Feel free to download and use the graphics in your blogs and publications to help people understand what pastoral work and leadership often looks like. My hope is that it will help more pastors (and churches) achieve better balance. 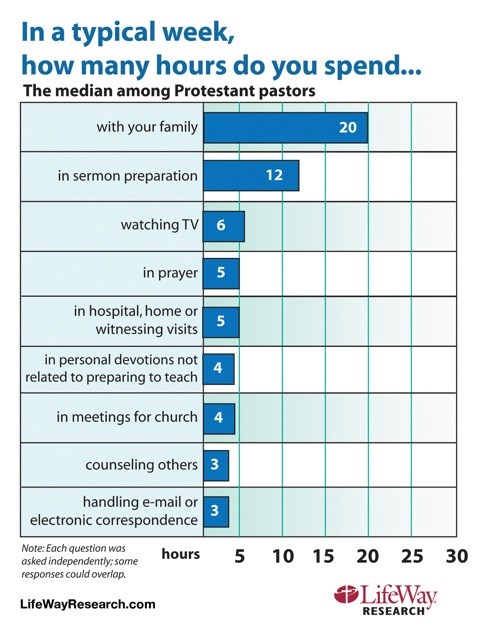 The data points to some interesting work patterns. 65 percent of pastors surveyed work 50 or more hours a week, with 8 percent saying they work 70 or more hours. "Meetings and electronic correspondence consume large amounts of time for many ministers, while counseling, visitation, family time, prayer and personal devotions suffer in too many cases."

Time with family rates as a priority for many pastors, but some find alarmingly little opportunity to be with their spouses and children. While 30 percent of the pastors report spending 20-29 hours with their families each week - and 16 percent indicate spending 40 or more hours with them weekly - almost 10 percent say they spend nine hours a week or less with family members. At the same time, 24 percent say they watch 10-14 hours of television each week, and 13 percent put their TV time at 15 hours or more.

Read the entire article here, and then come back to discuss. What are your thoughts on these numbers? What does Scripture say should take precedent in pastoral ministry? If you are a pastor, how do you manage your time and calendar?

Join the conversation on Facebook
Tags:
None
Posted:
December 29, 2009