Last night, I presented data to the state convention newspaper editors of my denomination. (Over 1 million people subscribe to these papers across my denomination.) These editors are great people working hard to communicate truth in an often tumultuous denominational environment.

Thanks to some good work of our team, we put together this data and released it to them last night. LifeWay released the data this morning from our LifeWay news people. You can find the charts here.

Here is the story:

LOUISVILLE, Ky., - Southern Baptist membership will fall nearly 50 percent by 2050 unless the aging and predominantly white denomination reverses a 50-year trend and does more to strengthen evangelism, reach immigrants, and develop a broader ethnic base, according to data just released by LifeWay Research. 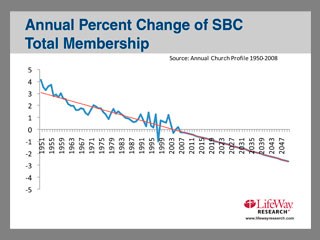 Ed Stetzer, director of LifeWay Research, told editors of the Association of State Baptist Papers on Monday that while SBC membership has risen most years - by as much as 4 percent in 1951 - the rate of increase has been declining by 0.06 percent per year, and the membership change trend line has now passed into negative territory.

"If the 50-year trend continues, projected membership of SBC churches would be 8.7 million in 2050, down from 16.2 million last year," said Stetzer. "Using U.S. Census projected population figures, SBC membership could fall from a peak of 6 percent of the American population in the late 1980s to 2 percent in 2050."

Stetzer quoted Cliff Tharp, formerly with LifeWay and an SBC statistician for 35 years, who said, "We have been slowing in our growth and have now passed into decline. We are right at the top of the arc and beginning to go down. But changes we make now can change that trend significantly. These stats are not new but it has never caught anyone's attention until now."

Stetzer said there are many factors that can contribute to such decline. One factor is that the mean age of the denomination's members is increasingly older than the general population, especially in the South, and Southern Baptists are reaching and baptizing fewer young adults. Second, Southern Baptists have failed to keep pace with the rising number of non-white and non-black citizens in the United States.

"The difference in the mean age of Southern Baptists versus the U.S. population shows SBC members older, especially since 1993," said Stetzer. "Prior to 2000, the difference in ages was not statistically significant, but we started to see a statistically significant divide in the age distribution of SBC members versus the general U.S. population after the turn of the century."

Meanwhile, the percentage of the non-white and non-black population is very different in the U.S. versus the SBC, said Stetzer, drawing from widely respected General Social Service data. Last year, for example "other" races made up 10 percent of the U.S. population but only 2 percent of SBC membership responding to the GSS.

The gap is particularly evident in the South, where immigrants make up a growing portion of the population, especially since 2000. "The South is becoming increasingly multi-ethnic but the SBC is not keeping pace," said Stetzer. "Although Southern Baptists have done great work among immigrant and ethnic groups, they are still underrepresented in our denomination. Great opportunity exists for us to share the gospel and minister to people. Ironically, the world is coming to us more quickly than we are going to the world."

Stetzer also addressed the recent decline in baptisms in Southern Baptist churches, pointing out that while baptisms have fallen every year but one since 1999, the trend line since 1950 shows no discernable pattern. "Baptisms often have risen several years in a row, only to fall for several years following," he said. "The annual percentage change of total baptisms in the SBC since 1950 is essentially flat. That means total baptisms between now and 2050 are projected to remain roughly unchanged as well. We hope that the last few years of decline are not a trend but just a blip, but there is no way to tell."