A recent survey conducted by the Barna Group demonstrated some important differences between "liberals" and "conservatives" concerning faith, religion and spirituality. 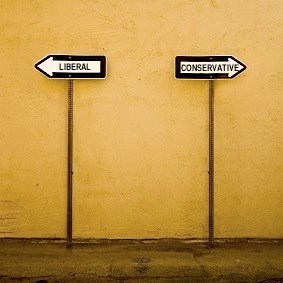 People's interest in - and reactions to - the social and political actions being made by President Obama and the Democratic-controlled Congress have heightened awareness of the different perspectives held by liberals and conservatives. A new study conducted by The Barna Group indicates that those differences are related to substantially different spiritual beliefs, behaviors and alignments.

Overall, the research shows that nearly one-third of all adults (32%) consider themselves to be "mostly conservative" on social and political matters, and about half as many (17%) claimed to be "mostly liberal" on such matters. The other half of the adult population generally takes a position somewhere in between those opposing viewpoints.

While most liberals and conservatives consider themselves Christian, a greater percentage is found among conservatives (94%vs 74%). And once we get beyond the simple title of "Christian," more differences emerge. For example, liberals are much less likely than conservatives to embrace Theism - that "God is the all-knowing, all-powerful creator of the world who still rules the universe today" (55% of liberals vs. 82% of conservatives). Liberals are also twice as likely as conservatives to be categorized as "unchurched" (40% vs. 19%). Half as many liberals believe the Bible is accurate in all it teaches (27% versus 63%, respectively); that Satan is real (17% versus 36%); and that they have a personal responsibility to evangelize (23% versus 48%).

Liberals are also far less likely than conservatives to strongly believe each of the following:

The survey also revealed that:

Why does this matter? Let me say that Barna's research consistently demonstrates that just because people identify themselves as "Christian" doesn't mean that they are following Christ or even hold to historic Christian beliefs. And claiming to be born-again does not mean that one has been transformed by God's grace. We're talking about subjective, individual perspectives of one's self. It's also important to understand that people are more than their political ideologies. Yet, knowing where people are coming from (what their beliefs, presuppositions, preferences and sympathies are) helps us to better preach the gospel, reason from the Scripture, and give an answer for the hope that we have within us. If you don't know who you're talking to you will have a more difficult time connecting with them, and connecting them to the gospel. Is your neighbor conservative or liberal? Churched or unchurched? Theistic, deistic, or atheistic? Ultimately we are not talking about labels, but people. This is why both research and relationships matter. The former helps us to see the big picture in our culture concerning the people we are trying to reach, and the latter is where we step into the work that God has called us to - reaching those very people.

Be sure to check out the whole article on Barna's survey, and then come back to discuss.

Join the conversation on Facebook
Tags:
None
Posted:
March 31, 2009