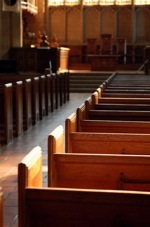 I hate to post over this morning's post about Barna's new research, but the American Religious Identification Survey (ARIS) has caught everyone's attention today as it points out the decline of religion and the rise in secularism in America. Bloggers, news outlets and newspapers are buzzing. The Washington Post's Michele Boorstein explains, "The percentage of Americans who call themselves Christians has dropped dramatically over the past two decades, and those who do are increasingly identifying themselves without traditional denomination labels."

Cathy Grossman and the USA Today have done their usual fine job of analysis. They summarize,

The percentage. of people who call themselves in some way Christian has dropped more than 11% in a generation. The faithful have scattered out of their traditional bases: The Bible Belt is less Baptist. The Rust Belt is less Catholic. And everywhere, more people are exploring spiritual frontiers -- or falling off the faith map completely.

Denominations and denominationalism are in decline, the cultural influence of Christianity continues to slip, more people are describing themselves as non-religious (now at 15%) and minority religions are increasing in popularity (like Islam and Wicca). Baptists are shown to be an aging group that continues to lose the younger generations and leaders. And, be sure to check out this very helpful interactive chart at USA Today.

The folks at ARIS have been gracious to let many of us see the research beforehand (embargoed until today), and it is a well done project with a solid methodology and an excellent sample.

What are your thoughts? What do you think this means for the church?