I knew the interview we did with Andy Stanley was good, and that it would be helpful and provocative. That certainly makes it blog-worthy. As I posted Part 2 of the interview where Andy shares some thoughts on preaching "verse-by-verse" through books of the Bible I knew it would generate a lot of discussion. But I find myself disappointed at some of the responses.

Some agreed and thought the interview was great. Thanks for coming by and commenting. I think many disagreed in a gracious and thoughtful way. That's good as well. But, many just make their typical drive-by comments and never took the time to learn from Andy. And, having listened to much of what is called "expository preaching" today but is really running commentary, some need to listen to Andy's ideas on communication. 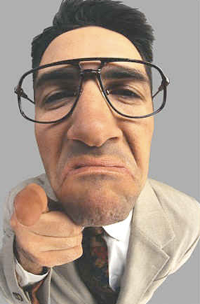 I am disappointed that some people cannot dialogue about issues. I am not saying that about everyone's comments, but I will tell you it is amazing how quickly some decide they cannot learn from another because they disagree. I've already blogged on this, so let me just say I believe that we have a lot to learn from each other in the church.

You may not agree with how Andy Stanly preaches. That is fine. He can handle it. He is doing just fine.

But, it appears that many in the church believe that if you're not preaching verse-by-verse it isn't biblical preaching at all. That is an unfortunate conclusion that rules out so many great preachers in throughout church history; just about everyone before John Chrysostom, and for that matter, every recorded sermon in the Bible.

Now, I have written extensively on my view of preaching, in at least three books, several magazine, etc. So, I won't rehash that here. But, a few comments may be helpful.

Yes, Andy is right, there are no verse-by-verse sermons in the Bible. Not a one. You cannot make the case that there is verse-by-verse exposition in the scripture. The Nehemiah reference and the Lukan account of Jesus "explaining the scriptures" are grasping at straws to prove a preconceived notion. It is a serious case of eisegesis and I find it incredibly ironic that those who are most passionate about Biblical exegesis are so ready to read into their Bibles something that is not there.

Look, the reason I believe in verse-by-verse, expository preaching is not because it is "in" the text, but because of what the text "is." Though I do not only preach verse-by-verse, I preach exegetical, expository, text-driven messages because the text (Scripture) is inerrant, inspired, profitable, etc. and I need to teach the Bible, not my views with the Bible as scriptural footnotes proving common sense thoughts.

I was working late last night on my next message in my Ephesians series. Why? Because I want to teach faithfully the truths of Scripture to my congregation. But, I am also working on ways to be sure they know it is important-- and Andy Stanley helps me know how to do help them see it is as important as I believe it is.

The Bible is relevant in this and every culture. We do not need to make it relevant. However, I do believe we need to help people understand that it is relevant and how to apply it to their lives. And, Andy provides great insight of that process.

But those of you who believe that verse-by-verse preaching is the only valid form of preaching need to decide if those who do not are "allowed." Will those who hold such view be attacked for holding them rather than engaged with a disagreement?

For many in the comments and at other places on the web, it seems that preaching like the early Church Fathers or Spurgeon (to cite just two examples), makes you not a "real" preacher. That is a shame.

If there is no room for the topical preacher, particularly one who seeks to bring people to the Word of God faithfully apply the word to an important issue, allowing the word of God to provide God's direction on that topic, then you have just eliminated doctrinal preaching and dismissed the historic examples of doctrinal preaching throughout the history of the church. And, you will have an incredibly difficult time partnering with people inside existing denominations and in broader evangelicalism.

And I fear that some of you will continue to isolate yourselves in a ghetto of people who say they love the word, but in many cases are not communicating it well to anyone except other believers already passionate about the doctrine you preach.

I get that Andy's comment about "cheating" is provocative (and he intended it as such), but it was not demeaning. I wish I could say the same about all of the comments about his comment. Many of you have shown scorn, rather than disagreement, and I believe you need to change the way you speak of those with whom you disagree.

Andy has written more about his view of preaching in his book, Communicating for Change, and you should read it-- a blog interview does not say everything a person believes on an certain issue. Having been reared under Charles Stanley and trained at Dallas Seminary, I think he has some awareness of how verse-by-verse teaching works.

And, I do think that Andy is on to something-- verse-by-verse preachers are sometimes cheating and can be lazy. Hear me on this. I'm not saying they aren't working hard to study and put together a sermon, but many stop there and do not push on into the even harder work of making the truth comprehensible. It's cheating to develop a sermon only well enough to be understood by the people who agree with you. It's lazy to not put the time into making the truths we believe comprehensible. We all need to hear Andy, even if you disagree with him.

Of course, I also think there are lot of topical preachers who are cheating too, but that is another story for another day.

Anyway, I have an open blog and allow open comments (none of which have been edited or deleted so far), but I think we can do better.

Thanks to many of you who are Reformed (or not Reformed but feel strongly about verse-by-verse preaching) who took the time to read Andy's thoughts an interact with them, rather than posting (at times) bizarre comments about how everyone who preaches differently has practically abandoned the faith. I appreciate the thoughtful comments and I appreciate you.

My hope still remains that there are enough mature people out there who can learn from others and that will become more evident as we work through the rest of the series in the coming days.

Again, my thanks to Andy for being so gracious and letting John and I do the interview in the first place.

My next post will continue the series "Andy Stanley on communication."

I am teaching at Trinity Evangelical Divinity School all day and won't be able to interact in the comments, but don't let that stop you for doing so. ;-)