According to a variety of sources, "house churches" appear to be increasing in number as some people move away from traditional forms of church. However, how many "house churches" are out there and how many people are involved? A new study by the Barna Group says it really depends on how you define "house church" and ask the questions in the survey. And, they are right.

When a question asks whether the survey respondent has "attended a worship service in someone's home, known as a house church," the results generally find about 10% of the adult population claims to have done so in the past month...

A different approach is to ask people how often, if ever, they attend a religious service - not a "worship service" - in someone's home or even in some other place that is independent of a congregational-form church. This more inclusive question typically finds that 22% to 24% of all adults claim to have had such an experience during a given month.

The most prolific response comes when adults are asked if they have "experienced God or expressed (their) faith in God in a house church or simple church meeting in the past month," regardless of whether it is affiliated with some other church entity. This definition, certainly the broadest of the six variations tested, finds that one-third of adults claim to have been involved in such a gathering during the preceding month.

So, how many are there? Again, it depends how you ask.

In 2006, this headline caught some attention: "1 in 5 adults attend house churches, according to first hard statistics."

At the time, I worked at the Center for Missional Research (CMR), and we thought it needed a closer look with some more specific parameters.

We commissioned a CMR/Zogby International to survey more than 3,600 people (1200 interviews on three occasions) about several issues, but particularly about their involvement in spirituality and alternative expressions of church.

We asked, "Do you meet weekly with a group of 20 people or less to pray and study scriptures as your primary form of spiritual or religious gathering?"

That seems a good description-- it does not say "house," which my organic and simple church friends says skews the question. They might meet in a coffee shop, etc. It also does not say it is a "Christian" meeting, so this could be any time of small religious gathering. But, it does say "primary form," so we were looking for people who saw this as their main setting for community nurture.

Remarkably, 26.3% of the 3600 Americans who were asked that question indicated that they did-- as their primary form of spiritual or religious gathering.

Comparatively, in one of the three surveys, we cross-tabbed the number to those who considered themselves "born again." In that case, 42.1% of those who identified themselves as born-again Christians said that they met weekly with a group of 20 or less people as their primary form of spiritual or religious gathering.

However, that could be a small group or Sunday School class. And, as Barna says, the number in House Churches depends on how you count.

We were looking to consider those who regularly attended a larger (or more traditional) church body. By doing so, we might be able to find those who don't go to an established/traditional church body, but still "meet weekly with a group of 20 people or less to pray and study scriptures as your primary form of spiritual or religious gathering."

When we cross-tabulated the "small group" question with the "church attendance" question, we found that 50 out of 3,600 adults attend both a group of 20 or less and "rarely" or "never" attend a place of worship. If extrapolated, this is almost 1.4 percent of the American population and may represent the purest measure of those who are not involved in an organized church, synagogue, or mosque but still are involved in some alternative faith community like, in the Christian faith, a house church. That is about four million Americans-- not a small number. It's by no means "1 in 5 Americans," but it is a large number and worthy of more research.

Here is a graph of our data. The light blue is represents those who indicated that they met "weekly with a group of 20 people or less to pray and study scriptures as your primary form of spiritual or religious gathering." The purple represents those who did not indicate they were involved in such a meeting. And, finally, the categories across the bottom are how often they indicated they attended church services. 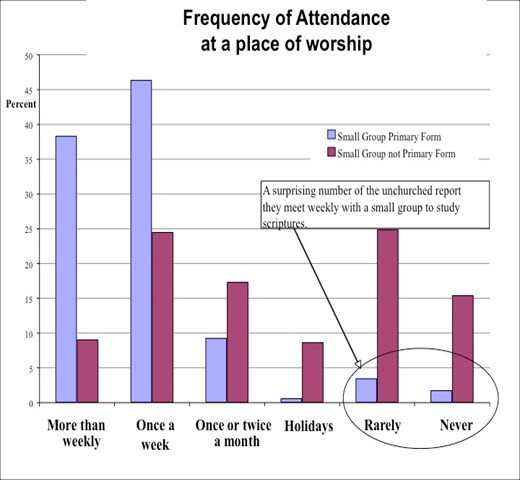 To me, the lower right hand corner is the most helpful-- people who don't go to "established" church but are still involved in a small group to study scriptures. Now, none of these questions are perfect (and everyone will want to re-word), but each bit of info helps us understand the situation more clearly.

Barna's right. It depends on how you ask. Feel free to dialogue below.

Join the conversation on Facebook
Tags:
None
Posted:
September 3, 2009