I thought it might be helpful to use the "Monday is for Missiology" series and look at some of the leading missional practitioners in the 21st century-- names that many of you will recognize.

So why look at the leading voices in the missional conversation today? In a time where it is "en vogue" to be missional, many Christian and leaders treat the models and modes suggested by missional authors "carte blanche." I think it is important to look at the substance (not just the popularity) of these practitioners to consider their views and advance the conversation.

There is much to be gleaned from their writing and speaking and I think you will find it interesting how many of these individuals find the impetus of their thought in 20th century missions history. I specifically want to look at the influence of missio Dei theology by examining its sway on the emphases of today's leading missiologists and missional church practitioners. Today, we look at Darrell Guder...

Guder, Newbigin, Bosch and the Genesis of Missional Terminology

Darrell Guder, currently Dean of Academic Affairs and the Henry Winters Luce Professor of Missional and Ecumenical Theology at Princeton Theological Seminary, has become one of the more important voices in the missional church conversation. Guder's influence on introducing the phrase "missional church" (along with the GOCN leadership) into the current evangelical lexicon is undisputed. Though he/they were not the first to coin the term, it seems obvious to me that he is the most influential and, in many ways, foundational to the missional conversation.

(For full disclosure, Darrell is a contributor in my new co-edited book (with David Hesselgrave) called MissionShift: Mission Issues in the Third Millennium. His focus is on defining mission for the church.)

The book Missional Church, which Guder edited and contributed to, arose out of a research project begun by the Gospel and Culture Network (GOCN). The book would be considered by many as the beginning of the missional church conversation. Leadership Journal published this "missional family tree" with The Missional Church as its trunk. 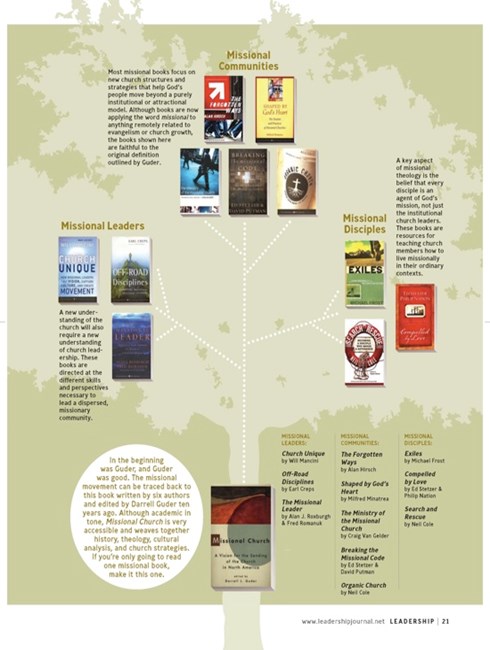 The chart accompanies an article by Alan Hirsch on "Defining Missional."

The GOCN surfaced in North America in the late 1980s as an expansion of the Gospel and Culture conversation inaugurated in Great Britain in 1983 with the publication of Leslie Newbigin's short monograph, The Other Side of 1984: Questions for the Churches. Newbigin publicized the growing consensus among missiologists and theologians that what had once been a culture of Christendom was now unmistakably post-Christian-- and in many ways, anti-Christian. Out of this awareness, the previously ecclesiocentric notion of mission became exchanged, according to Guder, with an overpoweringly theocentric rethinking of Christian mission.

This missiological reframing could be summarized with the concept of missio Dei-- "mission of God"-- that is, as Guder defines it, "the result of God's initiative, rooted in God's purposes to restore and heal creation."

God's nature as a "sending" or "missionary" God also led to a new vantage point on our understanding of the Trinity. Borrowing from David Bosch, Guder positions the missio Dei as God the Father sending the Son, and God the Father and the Son sending the Spirit. This Trinitarian point of access inevitably modifies ecclesiology, as the missio Dei institutes the church as the "instrument and witness," rather than the intent or "end" of the gospel. Guder states, "This does not mean that the church is not essential to God's work of salvation-- it is. But it is essential as God's chosen people..."

Vatican II and the Missio Dei

Following Newbigin's contribution, missiological researchers allied with the GOCN wanted to find a way to further explore this statement by Vatican II in both Lumen Gentium and Ad Gentes Diuinitus: "The church on earth is by its very nature missionary since, according to the plan of the Father, it has its origin in the mission of the Son and of the Holy Spirit."

The Second Ecumenical Council of the Vatican, or Vatican II, was the twentieth century Ecumenical Council of the Roman Catholic Church, beginning in 1962 and closing under Pope Paul VI in 1965. At the time it was conceived, the world's Catholic Bishops wanted to attend to the challenges motivated by political, social, economic, and technological changes in the world.

The two documents Lumen Gentium and Ad Gentes Diuinitus were compiled during the fourth and final period of the Vatican II in the Fall of 1965. Lumen Gentium (Latin for "Light of the Nations") provided crucial ecclesiological background for a vision of the church as the people of God on a "divine mission, entrusted by Christ to the apostles, [that] will last until the end of the world, since the Gospel they are to teach is for all time the source of all life for the Church." Ad Gentes (Latin for "To the Nations") was Vatican II's Decree on the Missionary Activity of the Church. This document argues that the church is unconditionally "missionary by her very nature, since it is from the mission of the Son and the mission of the Holy Spirit that she draws her origin, in accordance with the decree of God the Father."

Out of the theocentric reconceptualization of mission provided by the development of missio Dei theology, Guder derived a more explicit two-pronged orthopraxy for the mission of the church. First, he stressed the overwhelming impact of the Incarnation on mission and evangelism: God "sending" Jesus to the world as earthly embodiment of himself is the same way the church goes about its mission.

Guder cites the theme of the World Council of Churches conference in San Antonio in 1989-- "Your Will Be Done: Mission in Christ's Way"-- as an example of the ecumenical accord regarding mission and evangelism. The thrust for this theme came from the 1982 WCC Commission on World Mission and Evangelism and its major statement, Mission and Evangelism: An Ecumenical Affirmation. It contains a section entitled "Mission in Christ's Way." The imagery of "Christ's way," according to Guder, indicated a broadening ecumenical consensus on the linking of the Incarnation-- the way in which the Word became flesh or the model of Jesus' life-- and the manner in which the church employs itself in mission.

The second prong of Guder's suggested orthopraxy relates to the relative vocation of the church. Guder cites Karl Barth as a key influence regarding the understanding of the fundamental ecclesiological importance of vocation. In Volume IV of his Church Dogmatics, Barth develops the gospel of reconciliation in terms of sanctification, justification, and vocation. In placing vocation jointly with sanctification and justification, Barth arranged a theological framework for the missional church: its comprehensive vocation, centered on union with God, instigates His salvific mission for the world.

So, before I get too far, let me ask: Is Guder correct in supplanting the ecclesiocentric notion of mission with a theocentric concept of Christian mission? Does this frustrate the idea that the church is central to the missio Dei? What do you think of Guder's "two-pronged" approach to missional orthopraxy?

Feel free to weigh in.

Join the conversation on Facebook
Tags:
None
Posted:
April 19, 2010