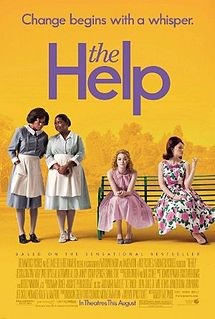 On a recent date with Donna, I saw, and was moved by, the new movie The Help. Based on Kathryn Stockett's best selling book of the same name, the movie, starring Emma Stone, Viola Davis and Bryce Dallas Howard, genuinely inspired, challenged, and even disturbed me.

The movie deals with themes of race, gender, and the southern culture of the Jim Crow era. As a privileged, white, male New Yorker, I am probably not the best person to discuss any of these topics, but others, who are from the south during that era and have also seen the movie, tell me that the issues were real and well presented.

The story line is easy enough to follow. Set in Jackson, Mississippi in the early 1960's, Eugenia "Skeeter" Phelan, a hometown girl, returns from college with the recognition that she no longer seems to fit in at home. After taking a job at the Jackson Herald as the domestic help columnist, she begins to follow her dream idea of writing a book. Her editor has told her that she should write about something that bothers her, but doesn't bother anybody else. She decides to write about a taboo subject--the lives of African-American maids in Jackson. The book tells the stories--through a series of interviews with these maids--of the long held deep south practice of African-American maids raising the children of privileged white Southerners. The movie addressed many of the injustices of the era, as well as the aspirations of African-Americans, many, like these maids, whose voices had never heard and others, like Medgar Evers, whose voices were silenced.

The overarching issue is race--and it deals with the subject unflinchingly. The "N-word" is not avoided, nor is the faux-respectful term of the day, nigra. The reality of racial prejudice is on display throughout. Of the maids featured, the two primary heroes are Aibileen Clark--who works for the Leefolt family, and Minny Jackson, who works for the antagonist of the movie, the self-righteous, bigoted, arrogant (though religious) Hilly Holbrook, Chairwoman of The Junior League, a ladies only club designed to solidify the already embedded racism and extend the city's classism by keeping certain white women out. It is through the eyes of these maids--and others who hear about the book--that the stories of racism and hatred unfold.

Gender issues are also addressed in The Help. Men do not play a prominent role in the movie, but most of those who do appear are weak, hollow shells of true masculinity. The same kinds of guys who would be ironing their pointy hoods in time for the weekend cross-burning. Though not strongly influential in the movie, their expectations and values are still felt. For example, when Hilly's new maid asks if she and her husband might borrow $75 so that both of their children can attend college, Mr. Holbrook quickly stands and excuses himself so as to avoid winding up in Hilly's cross-hairs or having to find a reason not to make the loan. And, them Hilly Holbrook explains that her Christian views are why she will NOT help with the need.

One subplot of the movie dealt with Skeeter's desire for a different way--to use her gifts, to be valued as a person, and to make a difference in the world (the phrase used in the movie). Because of Skeeter's appearance (her red curly hair and thin frame were considered less than the ideal by her family and friends) and the expectations of refined-southern culture, people were always trying to fix her appearance and fix her up. The one person in her life who had always recognized her value was the family's elderly African-American maid, Constantine.

The Help is also, in a sense, about rebellion; not rebellion in the sense of disobedience, but in the sense of righteous discontent. These black maids rebel, as best as they can, against the oppression of the day. They did so by telling the truth--and it is an ugly truth. Skeeter rebelled against cultural expectations--you might even say oppression--and sought to live her dream of becoming a writer. What we witness over and over again in our world, when unjust systems oppress, rebellion is at times the best answer.

Most days, I live in a world where courtesy is considered, by some, more important than courage. Ultimately, such a view fails to work. To use Aibileen's words, "Loving our enemies can be hard, but it starts by telling the truth." This movie told the truth in a powerful way and impacted me emotionally. I was inspired be courageous, angered at injustice, and determined to write something about the religious aspect in the movie, something you can read in an upcoming post.

Finally, the movie has its share of profanity and I am particularly bothered by uses of God's name in vain, but I will show my children the movie when the edited version comes out and talk about issues of race, gender, and cultural religion. It will be worth your time to do the same.

As I said, the movie moved me (as a good movie can)-- but it also angered me. I tweeted from the movie, "The Help's mix of elitism, judgment, & scorn (wrapped in cultural religion) is STILL real & even taught as discipleship in some places." More on that in a few days...

If you've seen the film, feel free to give your thoughts or interact with mine.

Join the conversation on Facebook
Tags:
None
Posted:
August 28, 2011