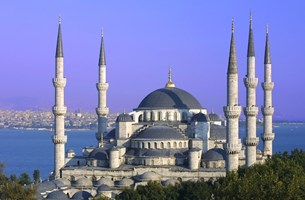 I want to go back to Turkey-- spiritually, that is! If you did not catch the earlier posts, you can find them here. We talked about Turkey as we visited the seven churches mentioned in the book of Revelation.

As such, rather than writing about a theological issue or something to do strictly with churches or denominations, I'm going to post an interview that I recently did with a missionary in Central Asia. This person was, at one time, a pastor in the U. S., but is now a businessperson of sorts, looking for opportunities to share Christ far away from America.

Today's post, and three subsequent posts, will contain the interview in which we discuss his interactions in the host culture, their views on religion, use of the term "Allah," and more. We did this interview in the proximity of the Blue Mosque, pictured to the right.

Thanks for the opportunity to talk to you. Tell us a little about where you are located and where you "engage."

That is everywhere from Turkey to Northwest China and Southern Russia, and the Persian Gulf. It's all the Turkic and Persian language family/people groups.

And when you say Christian, are you talking about evangelicals?

Yes, evangelicals, but that's pretty much anything. It would include Charismatics, Presbyterians and more.

But, you aren't talking about the Eastern churches, is that correct?

That's right. There has been almost no gospel impact whatsoever from the Eastern churches. Those are cultural. As a matter of fact, particularly in the former Soviet Union, the presence of the Russian Orthodox Church is one of the liabilities to the work of the Gospel, because it creates an association between Christianity and Russian imperialism. I actually had people tell me that Communism was the Christian faith because "Christian" Russians ran the Communist Party! In the minds of Central Asians, all Russians are automatically Christian. In addition, the association between Russian culture and Christianity meant that "Christians," in their minds, worshiped pictures, drank like fish, watched pornography, and engaged in sexual immorality. That's what it means to be a Christian. In essence, then, any believer trying to bring the gospel here starts out with sort of a deficit.

Still, significantly less than 1/10th of one percent of the population across Central Asia is Christian. The area is overwhelmingly Muslim.

What about where we are in Turkey? Is this an area where Islam is practiced devoutly?

No. It is more cultural here. It's like living in the southern United States. You know, in the South everybody is a Christian, but not really.

It seems that in your area the older people take their religious practice more seriously. Is that the case?

Religious practice in the urban areas is more nominal, but if you get out into the villages everybody goes to mosque. If you go to villages less than an hour from here, you'll see every woman's head covered. Even here in the city I can take you to neighborhoods where every woman is in black from head to toe with just a slit over the eyes. There are whole sections of the city where that's the way all the women dress.

Here in my country [Turkey] there are about 3,000 Christians out of a population of 70 million. About one-tenth of one percent is Orthodox Christian, primarily Armenians. There is also a strong Assyrian population who are the old Nestorians. When I say strong I mean that half of the 3,000 evangelicals in this country are of Orthodox background. There only about 1,500 Muslim background believers (MBBs) in this country. The vast majority of the provinces of this country have no churches, no workers, no Christian witness of any sort.

So now, the half who are MBB's, obviously paid a lot to make that conversion.

Yes, everyone pays a price, but compared to the entirety of Central Asia this is one of the easier countries in which to live and minister. They pay less of a price here. It's easier for us to get in here than anywhere else. It's easier for us to share here than anywhere else. We actually can, for instance, put ads in newspapers for New Testaments.

Is that the influence of secularization in your country?

Much of Islam was driven underground in the Communist era. How did that impact Islam?

The more folk style of Islam survived, where the formal Islam could not.

For instance, animism, which they identified as Islam, was intense. As a result, when first arrived in country, we were constantly being called on the carpet for doing awful, horrible things, like shaking hands across a threshold or leaning a broom against a wall.

Another factor was that under the surface the cell group structure was perfectly designed to thrive in a totalitarian environment. It's really funny, because it's actually older than Communism. But it's the way Islam has survived in various places. They had a secret cell group structure that survived intact to the point that many high-ranking Communist officials were members of one of the Sufi movements in the former Soviet Union. So it kept Islam going, through seventy years of oppression. It has reemerged, and has reemerged to the point now that the formal practice of Islam is thriving again in former-Soviet Central Asia in ways that it never had before. My colleagues who are working there are telling me that for the first time, they are dealing with people who have actually read the Koran. For the first time, they're dealing, for instance, with peoples who are saying that on the basis of Islam they need to stop venerating their ancestors. Islam is now challenging the ancient practices of ancestor veneration and of the various animistic practices that are commonplace. It really is quite interesting.

The big issue everywhere is that cultural identity and religious identity are synonymous. They can't conceive of it any other way.

Join the conversation on Facebook
Tags:
None
Posted:
August 11, 2011