Over the holiday weekend, LifeWay Research released some new data on how Americans perceive and pursue spiritual realities (You can download the full report here).

USA Today ran a story citing the data on Christmas Day and The Christian Post has since ran a story on the findings as well.

Here are a few highlights:

A recent LifeWay Research study found that Americans with even a slight curiosity about an ultimate purpose to life are more likely to participate in worship services, while half of those who never attend church never wonder about life's ultimate purpose.

More than two-thirds of Americans agree (strongly or somewhat) that the pursuit of meaning or purpose is a priority, but only half wonder about it each month. Seventy-eight percent agree "It is important that I pursue a higher purpose and meaning for my life" while 67 percent agree "A major priority in my life is finding my deeper purpose."

The study asked two questions about how often people think of specific aspects of the afterlife, the first being, "How often do you wonder: 'If I were to die today, do I know for sure that I would go to heaven?'" Thirty-one percent of Americans wonder about this at least monthly, including 8 percent wondering about it daily. Eleven percent think yearly about personally going to heaven and 46 percent never think about it...

Reacting to the statement, "There is an ultimate purpose and plan for every person's life," 18-29 year-olds are the least likely to strongly agree (40 percent). This reflects attitudes expressed in other LifeWay Research studies that more closely examine this age demographic and its diverse views of spirituality. In his book Lost and Found, LifeWay Research President Ed Stetzer found that 89 percent of unchurched young adults agreed when asked, "If someone wanted to tell me what she or he believed about Christianity, I would be willing to listen."...

For those who never attend church, the study revealed this group is least likely to pursue purpose and meaning in life or to think about the afterlife:

-- 19 percent strongly disagree that there is more to life than the physical world and society;

-- 33 percent strongly disagree that there is an ultimate purpose and plan for every person's life;

-- 63 percent strongly disagree that they think often about what I must do to experience peace in the afterlife;

-- 50 percent never wonder how they can find more meaning and purpose in their life;

-- 68 percent never wonder if they were to die today, do they know that they would go to heaven. 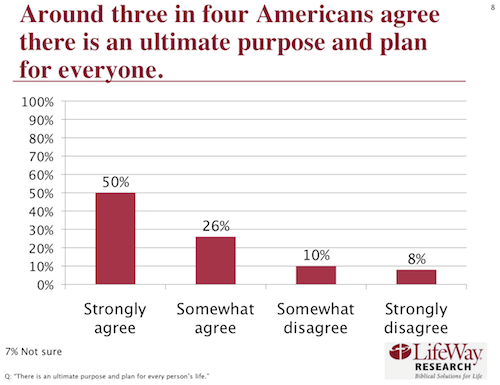 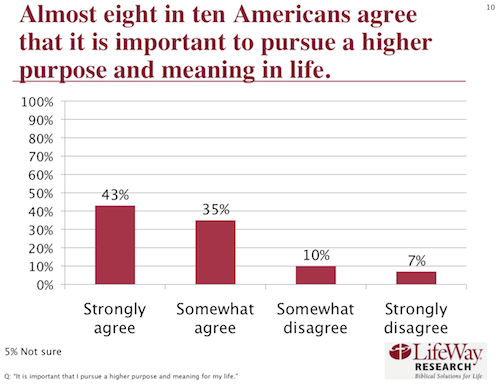 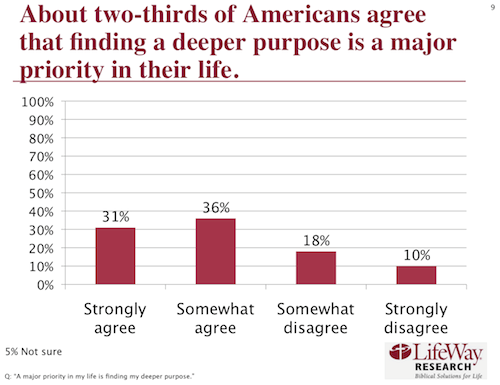 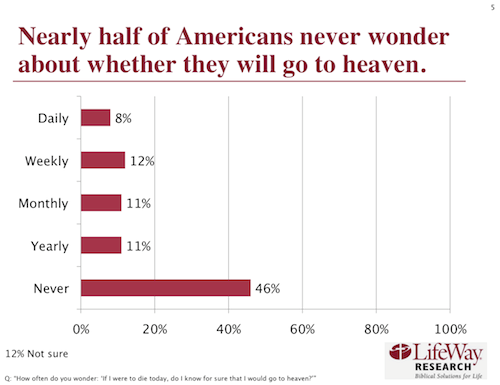 Feel free to discuss here or use the graphics and content on your own blog as you consider the context where we live.

Join the conversation on Facebook
Tags:
None
Posted:
December 27, 2011