In my last post in this series, I unpacked the leadership development and reproduction issues faced by church planters as reported by our "panel." Todd Wilson, Director of Exponential, his team, and I looked at responses from some of the best-known church planting practitioners in America and the issues flow from their observations. We hoped to discover the top issues in the ministries of planters that work with these leaders.

We discovered that these experts believed that leadership issues were the greatest challenge faced by church planters. Now, let me say that this is not a scientific quantitative survey, but rather an informal qualitative survey, now combined with our (Todd, me, and the Exponential team) advice and input but flowing from their responses and in the contexts of their plants.

Now, I should not have to add this to every post, but since I am about to talk about funded church planting, there is always someone who comes by and says, "But you don't have to do it with money, you could be a house church." Yes, I get that. I'm for that. I write about that probably more than you have (unless you are Neil Cole or Felicity Dale), and I invite others to talk about that.

But, during small church week, I am asked if I'm anti-megachurch. During megachurch week at the blog, people complain that I don't like missional-incarnational communities. Then, I talk about bi-vocational ministry and "clergification" and people ask if I am against paid ministry. You get the point. So, consider this "contemporary church plant week" and thank God for what He is doing in those kinds of churches. And, if you are in a different setting, listen in and learn about a different way to do things than you are. It will be good for you. ;-)

In surveying these leaders, leadership development was the first issue, but finances were a close second in frequency.

In our conversations, the financial issue was a big concern for many planters. We found that money management in the church, and personally for church planters, are ongoing concerns. Internal giving (and the lack thereof) and external fund raising are other concerns. Often these issues are not confronted but avoided, which can lead to all sorts of personal and ecclesial disasters for the planter. And, put on top of all that, for most planters the administrative/financial part of ministry is what they enjoy least.

The financial strains of planting represent one of the most significant challenges for planters. Many planters come from a relatively safe and stable job (including pay) into an entrepreneurial, risk-taking endeavor with an uncertain future. Often planters are thrust into fund-raising for the first time in their lives with little or no training. Many plants take years to become financially self-sufficient, relying on other churches and donors. The journey to financial self-sufficiency often places a heavy burden on the church planting family.

In Viral Churches, Warren Bird and I talked about the need for financial self-sufficiency. Self-sufficiency is almost always assumed as a goal (and rightly so, from a missiological perspective). For centuries, it has been a missiological axiom that churches should start and get to the point where they support themselves (and, among other things, reproduce themselves). But, as this chart shows, it can take awhile. 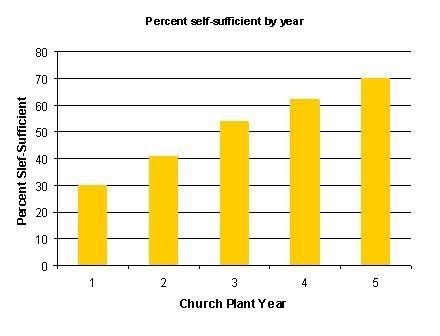 The chart shows the percentage of church plants that reported they were self-sufficient at each year mark (assuming they were still in existence, with about 2/3 of those started in year one still existing in year four). (You can see Viral Churches for all the research info.)

So, what are the big considerations? Here are a few based on the interviews and observations. There are several things to consider, but here are five ways to break this down.

"Conclusions and Observations" are coming in the last installment of this series. But for now, key questions about the handling of money, fund-raising, teaching, and offerings should be considered for planters and planting support personnel. Issue #3 for the next post will cover core team building and volunteers.

Do these concerns resonate with you and how you have handled them?

Join the conversation on Facebook
Tags:
None
Posted:
January 14, 2011