I am writing this in Central Asia where I am doing what I normally do. (If you know where I am or what I am doing, please do not add that in the comments.)

I was asked this week if I was worried at all about being out of the country on May 21 since the end of the world has been so prominently reported on.

No, I think Harold Camping is a false teacher. And, it is not just because he sets dates-- he has also called for people to leave their churches since they are all corrupt. If that was not enough for his listeners, I am not sure what it will take.

But, I have been asked a few times, what would I do if I thought it was the end of the world.

Well, I would do the same thing I am doing right now in Central Asia.

But, busy doing what? Well, for some it is taking out a camper and driving around making Christians look foolish. Here they are in their RVs in Nashville: 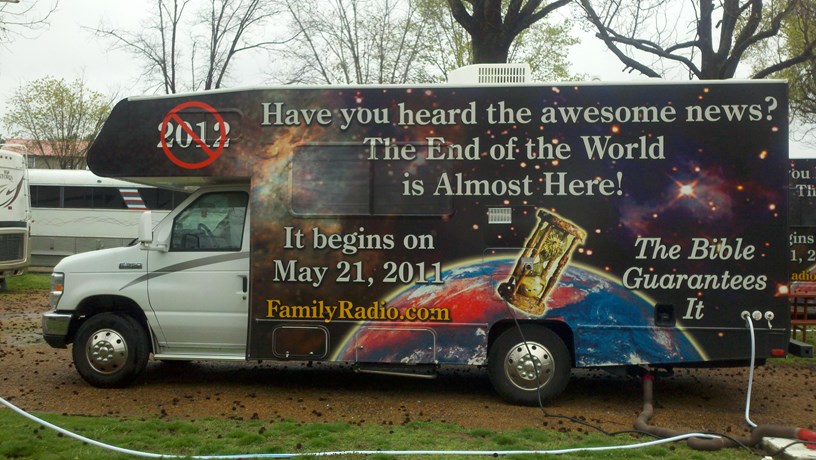 Yet, Jesus is coming back. Jesus was clear and unapologetic-- we are to be about kingdom work before the King returns and fully establishes reign. Yet, for a lot of Christians (and many churches) it does not seem like they are waiting and living in light of the "already" kingdom while waiting for the "not yet"-perhaps they are planning to get real busy at the last minute. That's what Camping's followers seem to be doing.

There have been times when people thought that Jesus was coming back--at that moment. And their reaction tells a lot about their lives. OUR reaction tells much about our lives.

This Saturday reminds me a bit of the "New England's Dark Day." You probably have never heard of it (unless you are a trivia nerd or part of the Seventh Day Adventist movement). It's in Wikipedia, so you know its true (since it is always accurate). I also talked about it in my recent message at Mars Hill Church in Seattle.

On May 19, 1780 the sky turned dark--so dark that they needed candles to see at noon. The darkness spread as far as they could see, every town in the area that they could contact experienced the same thing. It was shocking, frightening, and unexplainable to the people of that day (later, historians would explain that it was a combination of smoke from Canadian forest fires, cloud cover, and fog). But, to them, all they knew was that the sun was blotted out at noon-- the end must be at hand.

The event was so significant that even today, most traditional Seventh Day Adventists still consider this day as a fulfillment of biblical prophecy.

The Connecticut legislature was unsure if they should meet or go home with their families and face the end. They would have to bring in candles to conduct even the most basic business. But, Abraham Davenport (later made famous by a poem) stood up and expressed it clearly. He stood up and proclaimed:

I choose, for one, to meet Him face to face, No faithless servant frightened from my task, But ready when the Lord of the harvest calls; And therefore, with all reverence, I would say, Let God do His work, we will see to ours. Bring in the candles!

Davenport was not embarrassed or ashamed that the King might suddenly return. He was waiting and ready--if this was the moment, so be it. Yet, for many Christians and churches, they have been unengaged in kingdom work, so the return of the King is bad news-- so, suddenly, they want to "look busy."

You don't need a billboard with a date--you need a passion to live for a soon-returning Savior. I'm not the model on this by any means, but I will be here, doing the same thing I had planned because that's what I think Jesus would have me do.

I want to live ready in light of the soon return of Jesus, not acting like a nut because someone said he is coming back tomorrow. Honestly, I think that is part of why Jesus says, "no man knows the day or the hour." It's because we don't have to think, "Jesus is coming! Look busy" because we have been living in light of his return.

Join the conversation on Facebook
Tags:
None
Posted:
May 20, 2011