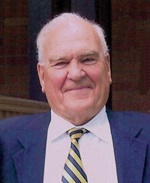 As president of LifeWay Research, I have great respect for the forerunners in the field of modern research--especially when it relates to religious research. Today we lost one of those forerunners with the death of George Gallup Jr.

Gallup Jr., whose father was the founder of the Gallup Organization, started the Princeton Religious Research Center in 1977. His interest in religious research stemmed from his own personal considerations of becoming an Episcopal priest earlier in life.

Religion was obviously very important to Gallup, but not as much to other researchers in that time. In the wake of the Watergate scandal, he began to take notice of what he called his in speeches "a groundswell of interest in religion." Gallup took notice of the growing number of evangelicals in the US and the importance denominations had started playing in politics.

Gallup and the PRRC paved the way for much of what LifeWay Research does today, and we are 100% thankful (with 0 margin of error) for George Gallup Jr., his research, and his concern for matters of faith.l

Join the conversation on Facebook
Tags:
None
Posted:
November 23, 2011