In 2010 I wrote a piece for Christianity Today where I argued, "yes." After laying out all of good, bad, and ugly I concluded:

Given all that, call me a cautious believer in the idea that we can do more for the kingdom of God by doing it together with people of common conviction--which usually means in a denomination--than by doing it alone.

The idea of "going it alone" is embedded in the American consciousness. The cowboy/ frontier/entrepreneur spirit is-- for better of for worse-- in our DNA. But history demonstrates (especially my denomination, which has roots in the issue of cooperating for missions) that we can make a bigger impact together than we can apart. If for no other reason, pretty much all churches will eventually "associate" with other churches for the purpose of pooling resources to reach the nations. Eventually their vision will outgrow their resources. That's why God gave us the Church.

"Associating" and "cooperating" for a common goal is easier said than done. Cooperation requires common conviction, unity, and grace.

You can read the entire article to see how I feel, but do denominations matter to anyone else? According to a new study by LifeWay Research, the answer appears to be, "Yes, at least for now."

A majority of pastors with denominational affiliation believe it is vital to be part of a denomination, but a majority also believe that the importance of identifying with a denomination will diminish over the next 10 years.

The Christian Post carried our release here. Here is a sample:

In response to the statement, "Personally, I consider it vital for me to be part of a denomination," three-quarters of pastors (76 percent) agree. That includes 57 percent who strongly agree and 19 percent who somewhat agree. Ten percent somewhat disagree and 14 percent strongly disagree while 1 percent don't know. 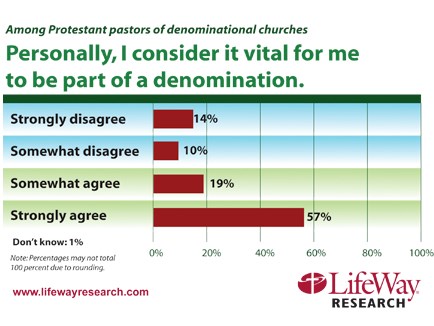 Despite the convictions of identity, however, nearly two-thirds of pastors (62 percent) believe the importance of identifying with a denomination will decline over the next decade. 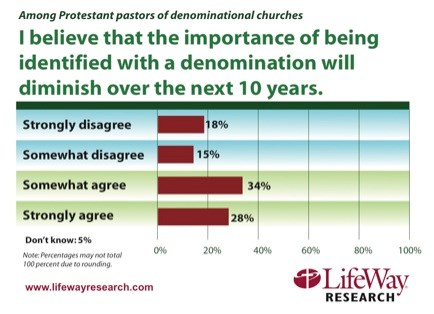 Survey participants were asked, "I believe that the importance of being identified with a denomination will diminish over the next 10 years." Twenty-eight percent of pastors strongly agree and 34 percent somewhat agree. Fifteen percent somewhat disagree, and 18 percent strongly disagree. Five percent don't know.

Many talk about the decline of denominations today, prompting us to ask pastors of churches that belong to Protestant denominations if they consider their affiliation vital. Many will be surprised at how strong their response was in favor of denominational connection, but also intrigued that their outlook on the future is much less optimistic.

A pastor's age, denomination, and education all play into how one perceives the value of their affiliation. Our press release tells the story:

The survey results reveal that pastors who consider themselves mainline are more likely than evangelicals to agree (strongly or somewhat) that their personal membership in a denomination is important. While 85 percent of mainline pastors agree that it is vital to be part of a denomination, only 74 percent of evangelicals agree.

Education and age also affect pastors' opinions of denominations. Those with at least a master's degree (62 percent) are more likely to strongly agree that their personal denominational identification is vital than pastors with a bachelor's degree (41 percent) or some college (48 percent).

The same groups -- mainline versus evangelical, education and age -- have differences in responses from pastors regarding whether their congregations consider identifying with a denomination to be important:

Those who consider themselves mainline (85 percent) are more likely than evangelicals (77 percent) to agree (strongly or somewhat) that their congregation considers it vital to be part of a denomination.

Pastors with at least a master's degree (53 percent) and those with some college (45 percent) are more likely to strongly agree that their congregation considers denominational membership vital than pastors with a bachelor's degree (35 percent).

Although age does not affect total agreement, pastors 65 and older (62 percent) are more likely to strongly agree that their church considers denominational affiliation vital than pastors ages 55-64 (48 percent), 45-54 (49 percent) or 18-44 (45 percent).

Pastors with less than a bachelor's degree (28 percent) are more likely to strongly disagree than pastors with at least a master's degree (14 percent) that the importance of identifying with a denomination will diminish over the next decade.

Ironically, the future value of most denominations depends at least in part on the very pastors who predict their decline in influence. The group most likely to predict denominational decline is pastors of larger churches, which is probably not surprising to most observers. Yet, it does point to the future challenge for denominational leaders.

Join the conversation on Facebook
Tags:
None
Posted:
September 15, 2011